Last week, the Federal Reserve cut US interest rates for the first time since the Financial Crisis. The Fed’s decision sparked a bond-market rally and flight to safety which sent yields spiraling lower around the world. Many are viewing the decision as a preemptive tactic by the central bank or an “insurance cut” to support the aging economic expansion.

The benchmark US 10-Year Treasury Yield has fallen by roughly 20% in the 5 sessions since – from 2.05% just prior to the FOMC announcement, to a low of 1.60% today. With the 2-Year Yield currently trading around 1.57%, that means the oft-cited 10/2-Year Yield spread hit its lowest level of the economic cycle intraday as the two yields come dangerously close to inverting. The 10-Year/3-Month Yield spread has remained negative since first inverting in May and broke beneath June and July’s lows today to a fresh cycle low. Historically, the 10/2-Year Yield spread inverting has been one of the best leading indicators of recession, but the economy tends to lag the signal by an average of 18-months. In March we did a deep dive on yield curve inversions. Read it here.

Overnight, central banks in India, New Zealand and Thailand all cut rates more than anticipated as some countries are even announcing unexpected or surprise cuts as they rush to keep par with the US. The 10-Year Yield in France is the most recent among developed economies to turn negative and the entire yield curve in Germany is now in negative territory. I could go on but this chart of 10-Year Yields for some of the largest economies in the developed world paints the picture best. There are no mixed signals, the trend is clearly lower for sovereign bond yields across the globe. 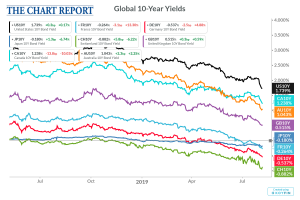 Since the Federal Reserve controls much of the action on the shorter end of the yield curve these days, let’s look out as far as possible to the 30-Year Treasury Yield to get the best view of what the Government Bond Market is telling us about the future for interest rates. While the 10-Year is still comfortably above its 2016 lows and the 5-Year is almost 100bps above its record 2012 low, the 30-Year is on the brink of making new all-time lows.

The 30-Year Yield fell by as much as 7% intraday today and came within 2bps of testing its record lows of 2.10% from 2016. Notice the handful of bearish momentum spikes since Q4 of last year. If we break below this level, long-term Treasury Yields will be in unchartered territory with no price memory.

Looking at a longer term chart of the 30-Year Yield shows us that 2.50% – 2.55% also represents a critical level of interest as yields bottomed there in both 2008 and 2012. It looked as though yields might regain their footing around 2.50% in June and July as we consolidated above this level before breaking lower last week.

As long as the 30-Year remains below 2.50%, the bias is lower in US Treasury Yields and thus higher for Government Bond prices. We could chop sideways between 2.10% and 2.50% as momentum works off its oversold readings, but new record lows look to be on the horizon into the end of the year. In this kind of an environment, the 10-Year Yield will likely follow to new record lows as well and we’d expect the longer end of the yield curve to eventually invert along with the shorter end.

There are a lot of “first time in history” events occurring these days, and all the negative yielding sovereign debt around the world is just a part of that story. I don’t know what to make of this anymore than the next person, but when investors are positioning defensively by piling into bonds and out of equities and commodities, it is typically not a good environment for risk-assets.

Hope you enjoyed this post! As always, reach out to me at Strazza@thechartreport.com with any questions or comments.