This week J.C Parets of All Star Charts wrote a piece about the Dow Industrial Average which he calls his “favorite of all the stock market indexes.” He may be be in the minority on this however as many market participants often criticize the price weighted configuration of the index. While other major indices are market cap-weighted which results in gains being driven by the largest names, the Dow is price weighted with the highest priced stocks representing a higher portion of the index. Parets points out, “for this reason, it often gets dismissed in favor of the ‘broader-based,’ market cap-weighted S&P 500.”

In looking at his 4-year chart of the Dow ($DIA), S&P ($SPY) and Russell 3000 ($IWV), the latter of which represents roughly 98% of investable US Equities and tracks an additional 2,970 issues than the Dow, it is hard to imagine these indices are much different from one another considering how closely their prices track over time. 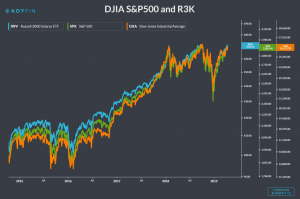 “It’s really the simplicity of the 30 stocks that represent the Dow that makes me appreciate the index for what it is… If you get the Dow right, you’re likely to be on the right side of the other ones too. So, if this is the case, would you rather analyze 500 or even 3,000 stocks? Or is 30 a better, more reasonable number?” – J.C. Parets

“Simplicity Has a Lot of Benefits”

Meb Faber and Ralph Acampora discussed this same concept on Faber’s podcast in which Acampora pointed out that due to the basic nature of the Dow’s weighting structure, one can easily calculate targets for the overall index based on individual targets for the 30 components. Have fun trying to do that with a cap-weighted index of hundreds of stocks.

Ralph refers to this as “What-if Analysis.” He explains, “It prevents you from becoming wild-eyed bullish or wild-eyed bearish. I hear comments from people sometimes saying the markets are going to crash… I say ok, what stocks are going to take you there?” Listen to him talk more about it at the 40-minute mark on The Meb Faber Show earlier this year.

Hottest Stocks in the Dow

Let’s look at some of the strongest Dow components and see what they’re currently telling us about the future trajectory for the index.

Cisco ($CSCO) has been the top performer on a YTD basis. After reclaiming its 2018 highs earlier this year, it took almost no time to consolidate before making a monster move higher.

Price is now up over 17% from its breakout level and is less than 15% off all-time highs. Even though momentum is diverging lower as price grinds higher, it remains in an overbought condition and price has yet to confirm the divergence. This is highly constructive.

Microsoft ($MSFT) has been another strong performer, up about 30% from its December lows with price closing at fresh ATHs again yesterday. Like Cisco, it barely paused after reclaiming prior highs from 2018 and continues to grind higher. The momentum divergence is a bit more pronounced on this chart, but bias remains to the upside as long as we’re above ~115.

Visa’s ($V) chart looks like a spitting image of Microsoft’s, also up just over 30% from its December lows. This is yet another base that resolved higher with very little consolidation. Although it quickly retested the breakout level near $151, it has since been stair-stepping to a series of new ATHs.

A clear trend we see in these three charts is the lack of consolidation as they break to new highs. Any backing and filling that has occurred has taken place above prior highs which is a very bullish development.

Two for the Road

After breaking to new ATHs in March, Nike ($NKE) gapped below its 2018 highs on the heels of earnings, but has since recovered and closed back in record territory yesterday.

Intel ($INTC) just closed at highs not seen since last June as price gapped up 3% yesterday and RSI spiked into a bullish range. This is yet another long-term consolidation resolving to the upside.

Considering the paths of $CSCO, $MSFT and $V before them, which direction do you expect $NKE and $INTC to head from here?

As for the Dow overall, not only are we seeing robust strength from the leaders, but only a few stocks are in the red on a YTD basis (read yesterday’s post on The Bloodbath in Healthcare). Over half of the stocks in the index have made new 3-month highs this week and 14 are within 5% or less of their 52-week highs. The weight of the evidence is suggesting higher prices are ahead as all these things bode well for “Papa Dow” and therefore the other major US indices as well.