The discussion of the Financials sector underperforming has been growing louder as a potential concern on financial social media. This week Financials were the 2nd worst performing sector as well as the worst performer on Friday alone. At 14% of the S&P 500, Financials are an important sector to say the least. Many investors argue that you can’t have a bull market without Financials participating.

Here’s what some investors had to say:

In a post Friday, Mark Newton of Newton Advisors notes that “financials have been hard hit after good performance in January but are nearing support into next week, which I think could be a positive for the markets if this group tries to hold and turn back higher.”

Investors should also be on notice something for something else. The small-cap sub-sector’s within Financials are actually much stronger than their large-cap counterparts. This is a topic seemingly glossed over at the moment. The most important tell for Financials going forward is what happens in both Regional Banks and Broker-Dealers. These two groups are working on false-breakdowns above prior 2007 and 2017 highs. If these two groups can continue higher that is a great tell for risk-appetite in Financials.

Looking at the percentage return since the December 24th low in the market, KRE has outperformed both XLF and IAI. Investors should keep watch to see if the outperformance continues or will rollover.

Todd Gordon, founder of TradingAnalysis.com, was on CNBC’s ‘Off the Charts’ segment yesterday also discussing Regional Banks. He touched on the outperformance of KRE relative to XLF, a bullish sign for the sector. With Financials underperforming the market and below a 200 day moving average they have near-term work to do. Todd also feels that the flattening 2-10 Yield Curve is putting pressure on Financials but there is a possibility for an inverse head-and-shoulders pattern in KRE to develop. 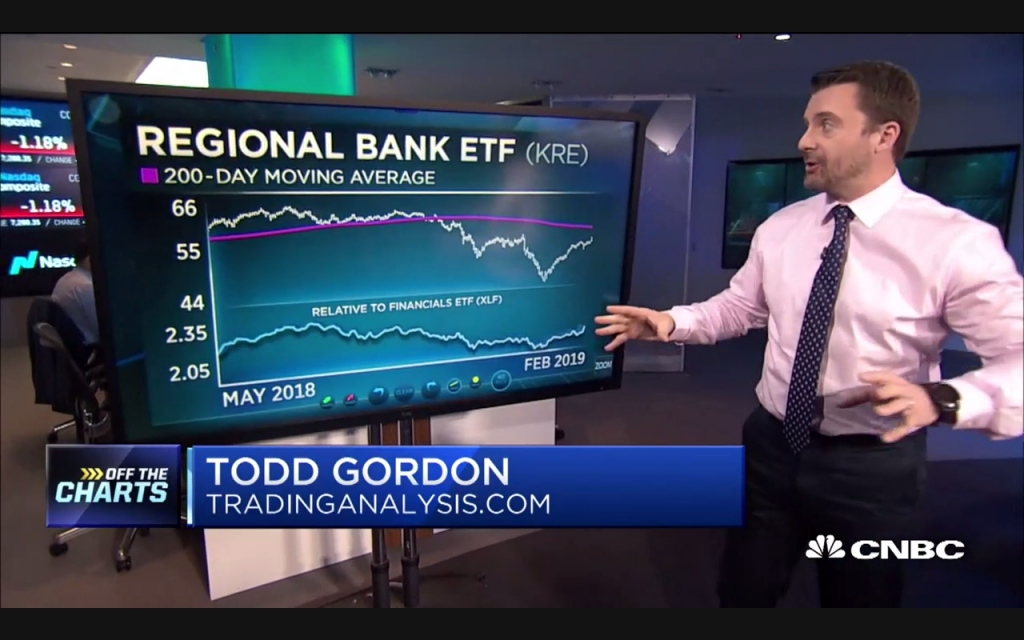 What’s most important for investors to understand is Berkshire Hathaway and J.P. Morgan are the top two holdings in XLF, making up 24% the ETF. These two stocks are very important for the direction of Financials as well as the overall stock market – Berkshire and JP Morgan are top 10 S&P 500 components.

Both stocks are in clear long-term uptrends. In the near-term, they have put in higher-lows. Ideally price action can build out a base below all-time-highs and see an eventual breakout.

In closing. while XLF has not outperformed the S&P 500 since 2000-2002 what’s most important is that Financials can stabilize and work their way higher in this symmetrical triangle pattern, ultimately breaking out.