Welcome to our new “Trade Ideas” segment of The Chart Report.

In this post, we dive into the Staples Sector and identify two strong stocks that recently broke to new record highs:

The Safety Trade IS Here to Stay

In recent weeks we’ve written about the flight to safety in equity markets. In a post earlier this month I begged the question, “Is the Safety Trade Here to Stay?” From observing price action in the two weeks since, I would argue it is. This thesis goes hand in hand with another theme we’ve been covering which is collapsing interest rates around the world. Defensive sectors don’t just do well during times of uncertainty, but also tend to outperform when yields are low as investors are attracted to the low volatility and high dividends paid by these companies.

Sectors such as Utilities ($XLU) and Real Estate ($XLRE) are often referred to as “Bond-Proxies” as they exhibit lower yet more consistent levels of growth and stable yields. These sectors have much stronger correlations to bonds than other sectors.

Staples ($XLP) also have a positive relationship with bonds. This is evidenced by the chart below which shows the relative performance of Staples vs the S&P has a high inverse correlation with the 10-year yield. When yields started to break higher in 2016, it wasn’t long until the ratio of $XLP vs $SPY rolled over. With yields now moving lower, we are in an environment where Staples should outperform the S&P 500.

As for bonds, we’ve been covering the new 52-week lows in interest rates across the board in the US (and globally!). Yields ranging from the US 1-year to 30-year treasury all hit new lows in recent weeks and the yield curve inverted as the longer-end continues to accelerate to the downside. As a result, we’re seeing new 52-week highs in Bonds. The pressure on rates has also propelled high-yielding sectors like Real Estate and Utilities to new all-time highs this month.

While Utilities and Real Estate have already put in strong breakouts, Staples – which is also viewed as a defensive area, has some catching up to do. As you can see in the sector return matrix below, Staples are starting to garner investor attention as they have been the best performer over the trailing week and 3rd best over the past 1 and 6-months (based on total return). 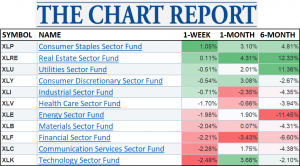 The 6-month returns illustrate this risk-aversion in equities is nothing new – the Safety Trade has been working for the last two quarters as $XLP, $XLRE and $XLU are the only sectors positive over this timeframe. I expect it to keep working and for money to start rotating into Staples in the coming weeks to months. The daily Relative Rotation Graph is already showing this. Staples have moved into the leading quadrant – up and to the right with momentum is exactly what you want to see on these charts, just like $XLP is doing.

I pitched this idea on Real Vision last week. The interview aired today, and you can watch it here:

We always want to be in the strongest names in the strongest areas of the market. Church & Dwight Co. ($CHD) has been one of the strongest performers within Staples for a long time now, steadily outperforming the S&P 500 for over a decade. Here is its price relative chart.

The ratio just hit a fresh high in December and looks poised to push higher after successfully retesting support near former highs. Put this chart in the context of Staples’ performance vs the S&P over the past decade or so… $XLP is still near its pre-financial crisis lows while $CHD is near record highs. Despite being in a weak sector, $CHD has consistently outperformed the market. Now that Staples look due to outperform, the leaders should continue to lead. As such, $CHD is definitely a name we want to be long.

Prices made a strong move to new all-time highs last week and printed a bullish momentum reading with RSI back above 70 for the first time this year. This is a very clean setup as $CHD has been consolidating through time since last fall, with momentum remaining in a bullish regime. We want to be long above prior all-time highs around $69 with a stop near the March 20th low of $65.50. This limits our downside to about 5% while allowing the stock some breathing room to avoid being shaken out of the position. Our main price target is $83 which represents the 261.8% Fibonacci extension from the recent consolidation. I would suggest entering the position on a pullback as close as possible to the $69 level. This should provide you a lucrative reward-to-risk setup of roughly 4:1.

Church and Dwight is one of the higher beta names within the Staples space. Considering the choppy market environment and recently inverted yield curve, many investors are going to look for safety in the most stable, high-quality names. Price action reflects this risk aversion as the S&P Low Volatility Index ETF ($SPLV) has outpaced other factors back to new all-time highs this year. Call me boring, but I think one of $SPLV’s larger components, Pepsi ($PEP) offers a very favorable setup at current levels. $PEP is also one of the top holdings in $XLP.

This weekly chart of Pepsi is annotated to outline the trade idea above.