Two renowned Technicians made television appearances last week and warned about the bearish signals they were observing in the Technology Sector. After just a few trading days they’ve been proven right as the Technology SPDR ETF, $XLK is down almost 4% in the past three sessions. This call is no longer immediately actionable due to the fast move lower in $XLK as it just registered its first oversold daily RSI reading since December. With that said, we can always learn from the best in the business – so let’s dive in and see what it was that made them turn bearish on the space at just the right time.

Mark Newton, CMT made an appearance on CNBC’s Trading Nation and discussed the weakness in Equal-Weight Technology ETF, $RYT. Newton pointed to the breakdown in $RYT relative to the S&P 500 as one of the near-term “signs of technology starting to peak out.” He noted that the ratio “for the first time all year has broken a pretty meaningful uptrend line going back to September.”

Another well-known CMT, David Keller made an appearance on Bloomberg last week where he also warned of “a series of trendlines that you have to pay attention to” that have been violated in the Tech Sector. Watch it here.

This post will focus mainly on Mark Newton’s analysis as I reached out to him for comment and he sent me a summary of his thesis with an updated version of the chart he discussed on air. In his $RYT/$SPX chart below, you can see the trend line break from last week and downside follow through in recent days. 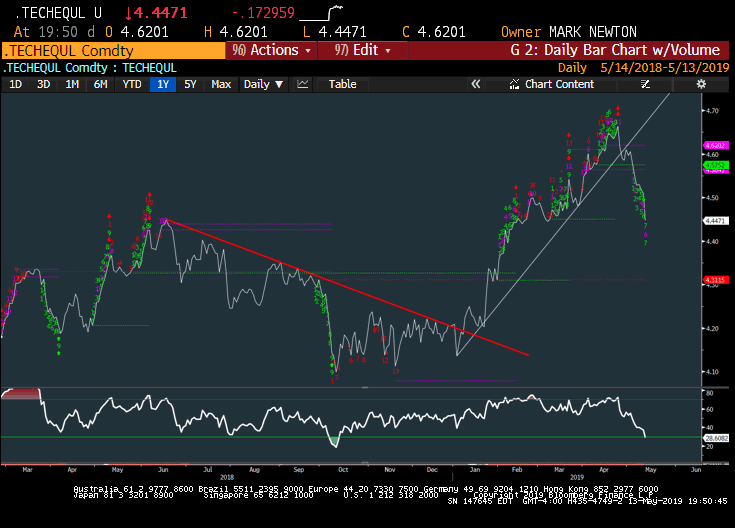 In his note, Mark told me the negative momentum divergence that formed in April was one of the first warning signs, but just recently was it confirmed by prices breaking to the downside.

Mark explained there was evidence of “upside exhaustion” ahead of the recent top as illustrated by the Demark sell signals on the chart above. These conditions were similar to the ones we saw leading up to the peak in $RYT relative to the S&P last summer. The last piece of evidence Mark needed to confirm his cautionary view was the trendline break, which he describes as “very negative, as it represented a break of a four-month relative uptrend.”

Outside of the Equal-weight Tech vs S&P 500 ratio, Mark described some other concerning developments in recent weeks that pushed him to turn bearish:

“I typically watch Semiconductors very closely and they peaked out more than a week before most of the Tariff news broke… so an April 24th peak which was followed by a peak in the NASDAQ a week later. XLK, of course, made the similar trendline break as many other Tech gauges, but this wasn’t my area of focus.”

Mark also mentioned that the “prior breakout above highs is now back below those former peaks from early October” in $XLK. He believes this “is a concern” and in fact, it has not only occurred in the Tech sector SPDR but semiconductors ($SOX), Equal-Weight Tech ($RYT) and the Equal-Weight / $SPX ratio are all now trapped back below their key highs from 2018. You can see this price action in the charts of $XLK and $SOX, below. 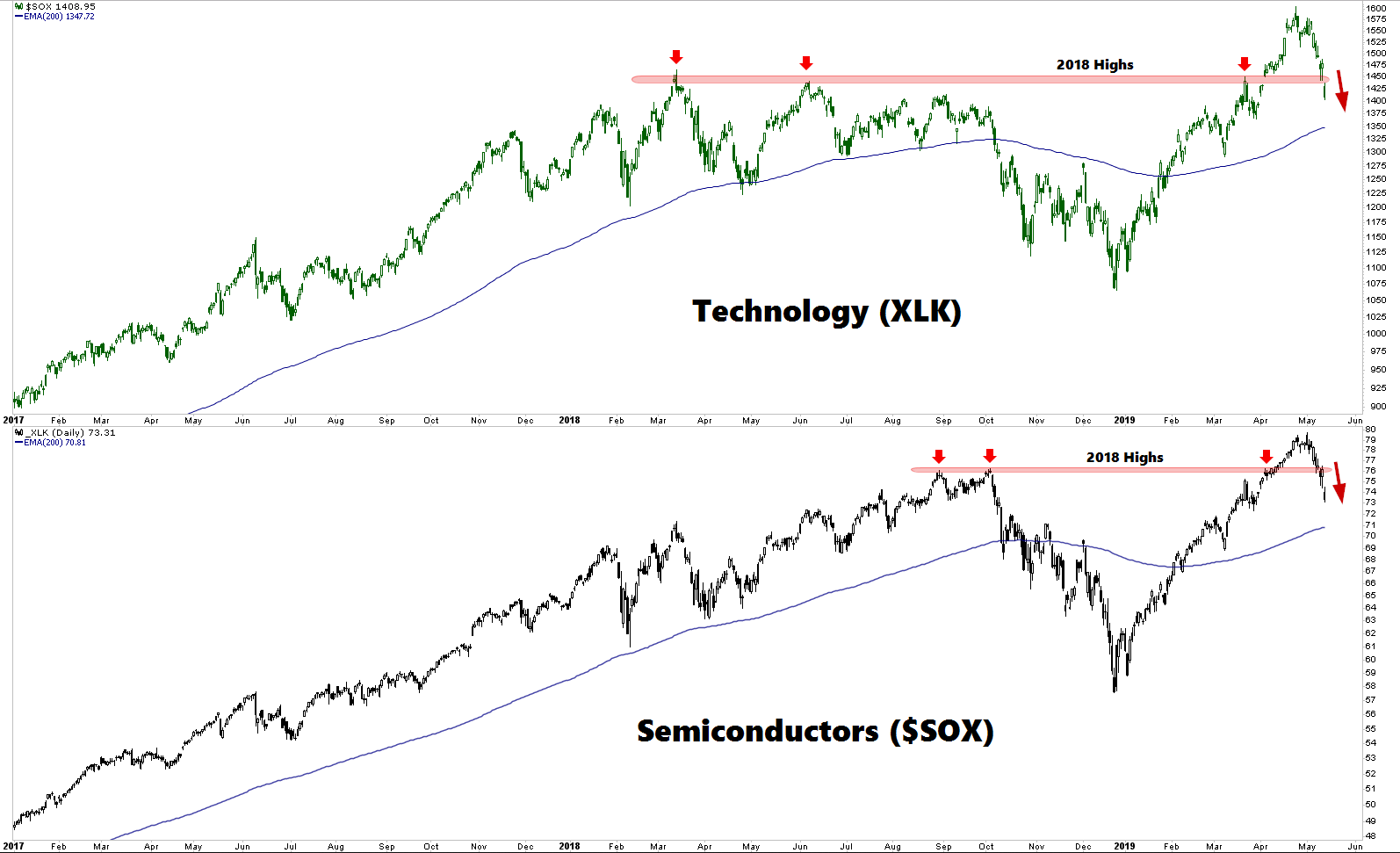 On his CNBC segment last Thursday, Mark concluded that based on these cautionary signs “this should spell at least a near term change in direction where we can see some further rotation out of Technology.” As such, he suggests investors “consider avoiding Tech” as we approach the summer.

As for the rest of this week, Mark’s view is that “the next 2-3 days will be negative in Tech and despite momentum now reaching oversold levels,” he stated, “we’re not there yet to suggest buying from a trading perspective.”

Mark zoomed out on the charts for a longer-term perspective and told me in his note that “the monthly chart of Equal-Weight Tech vs $SPX still shows a decent two-year uptrend in place.” Here it is. 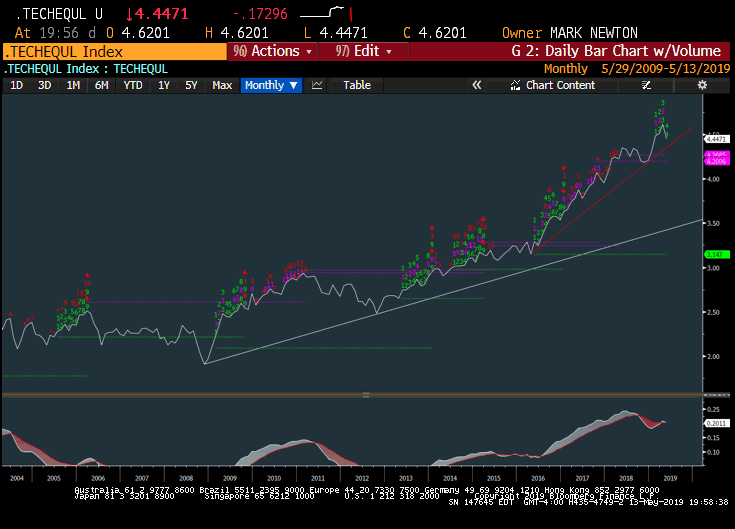 Although, the structural outlook has deteriorated of late as Mark explains in his following comment:

“The biggest negative is the bearish momentum divergence in Tech right now, as the monthly chart shows. This makes me concerned about Tech simply bottoming and turning up again sharply. While the intermediate-term trends are still bullish, my feeling is one has to be far more selective in the coming 3-4 months on what to own on a recovery. I do feel this can happen but am not all that enamored with the sector given the extent of the combination of monthly overbought conditions that are waning along with the negative divergence.”

We’ll be sure to follow up on the price action in Tech in the future but for now, feel free to reach out to us with any questions or comments on this post. Big thanks to Mark Newton of Newton Advisors for providing exclusive commentary to The Chart Report so that we could share it with you!