John Roque has been somewhat of a ghost in the financial media world ever since he left the sell-side to join George Soros at Soros Fund Management. He is currently a technical strategist for Key Capital Management, a Soros seeded hedge fund. Although you may not have heard of him, he’s highly respected in the technical analysis community and when he speaks, people listen. He recently sat down for an interview with Financial Sense Newshour and outlined the reasons he thinks investors should approach the current market with caution. The podcast is definitely worth a listen (view all the charts from his presentation here). Here are the top 3 takeaways from his interview.

1.) Technology & financial sectors are at bubble-like weightings in the S&P 500

John points out that it is widely believed the technology sector represents a 25.5% weighting of the S&P 500. What a lot of people fail to consider is that several of the largest companies, Amazon (AMZN), Priceline (BKNG), and Netflix (NFLX), are actually not components of the technology sector. If you add these three companies back into the tech sector you end up with a 32% weighting. This is concerning when you consider that at the peak of the dot.com bubble tech represented 33% of the S&P 500.

He then goes on to mention that if you add the technology and financial sectors (including real estate), the two represent 50% of the S&P! To emphasize the threat this poses he explains “If a portfolio manager had 50% of the weightings in his portfolio in two stocks, he’d be pretty darn concerned.” 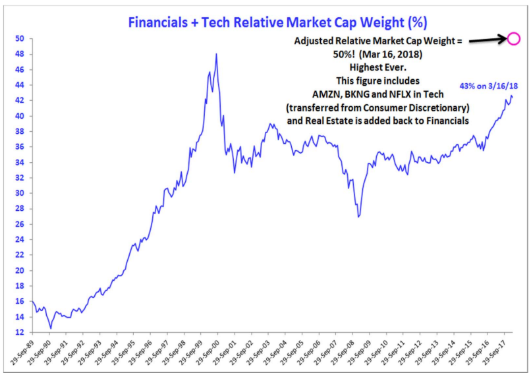 2.) The energy sector looks poised for a comeback

In contrast to the massive weighting of the tech and financial sectors Roque highlights that the energy sector currently represents a much smaller weighting in the S&P 500, around 5.5%, This is nearly a record low weighting for the sector however he expects this to be a support area for the market cap weight of the energy sector. Roque believes the sectors light weighting in the S&P could change soon and that energy may begin to outperform relative to some of the more inflated sectors. 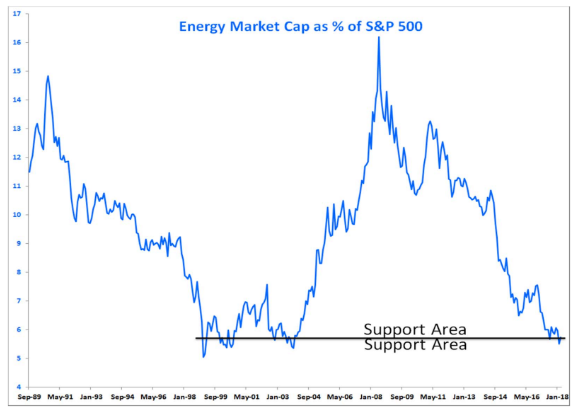 Roque and the interviewer begin their discussion of interest rates by emphasizing how far the 2-year yield has come in a short time. In the Summer of 2016 it was at just 0.5% compared to today at well above 2%. As for the 5-year yield, Roque’s own target has been 3%, but he thinks 5% isn’t out of the question. He then goes on to talk about the 10-year yield using a long term chart going back as far as 1790. His chart shows a potential 67-year double bottom in rates around 1.5%, which served as a support level once in 1945 and again in 2012. Roque is not sure at what point these higher rates will present a problem to U.S. stocks but cautions that investors should take higher rates into consideration. 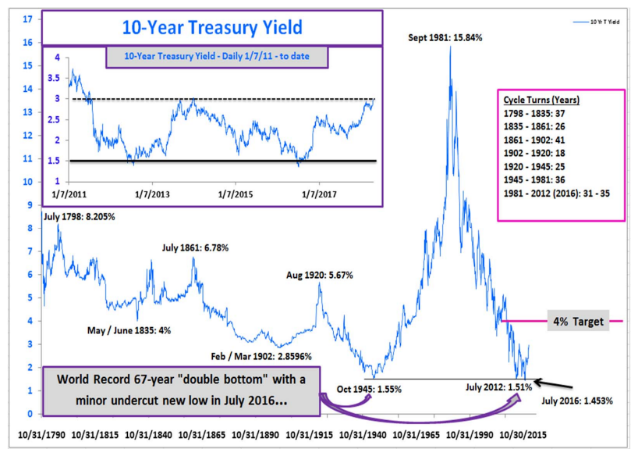