It’s a tech dominated world and the stock market is no different. The latest cyclical bull market was powered by high-growth areas like Semiconductors, Application Software, Internet & Social Media. Technology has been leadership along the market cap scale for several years. Now with Equities trading back towards record highs, it would be a bullish development to see these same areas resume their leadership roles.

Large-Cap Technology Sector SPDR, $XLK has made a series of record highs since April of this year as it has been the top performing sector with a total return north of 30% in less than 9 months. Here are the year-to-date Sector SPDR returns. 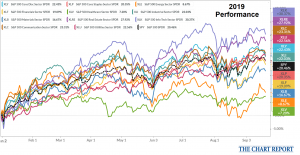 Another common theme for the US Equity Market has been the lack of participation from Small and Mid-Cap stocks. While this continues to be true and the S&P Small-Cap 600 ($IJR) and Mid-Cap 400 have been trapped in a range for the better part of 2019, there is one area that has been participating across the entire market cap spectrum… Surprise, it’s Technology.

The S&P 400 Mid-Cap Technology Index made fresh all-time highs in July and is currently trading less than a few percent off that level. Along the same lines, Small-Cap Technology ETF, $PSCT has been stair-stepping higher year-to-date and made a new 52-week high on Thursday as prices came within pennies of their record high from August of 2018. To put this strength in perspective, the S&P Small and Mid-Cap Indexes are still 14% and 6% below their all-time highs, respectively. 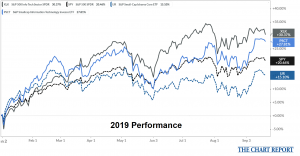 The outperformance from Technology this year is illustrated well in the performance chart above. Technology continues to generate strong positive alpha as the spread between broader market and Tech Sector ETFs is roughly 10% for both Large and Small-Caps on a year-to-date basis. Also note that PSCT made new highs this summer while Small-Cap 600 ETF, IJR could not.

Performance over the trailing quarter shows that the rotation into Small-Caps we’ve seen at the index-level in recent weeks actually began a lot earlier beneath the surface. Small-Cap Technology is up over 8% in the last 3-months while Large-Caps are up just 3.5%. Further making the case for near term strength in Small-Caps is the slight new high PSCT made in September while XLK appears to be rolling over just below its highs from July. 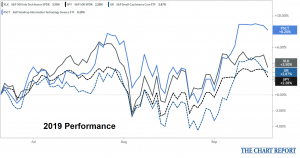 While tech’s year-to-date performance is impressive, it is also misleading. When we zoom out on the price chart the trend reveals itself as a sideways mess dating back to the second half of 2017. Price is at the same level today as it was over a year ago and has been stuck in a range between the low 70’s and high 80’s for over two years.

With that said, if prices can make a sustainable move above 2018’s high of 89.80, we should see an acceleration in momentum and the start of a new uptrend. With Large-Cap Tech looking tired and potentially confirming a bearish momentum divergence as prices rollover just beneath their prior highs, it may be time to re-allocate some of those tech stock profits towards the smaller companies in the space. Small-Caps are seeing rotation not just at the index-level as the Russell 2000 has been outperforming the S&P 500 in recent weeks, but also at the sector-level as we pointed to the strength from Small-Cap Technology relative to Large-Caps. If PSCT can breakout and give us a clear level to define our risk against at its prior highs, it might finally offer a better reward/risk setup and stronger uptrend than the market’s predominant leader, Technology SPDR, XLK.