The market has staged quite a comeback from the December 2018 lows with all of the major US stock indices up over 10% year-to-date. The sharp, V-shaped recovery has been met with a lot of skepticism. Many technicians are warning that the 2800 level in the S&P 500 will act as resistance, while others point to improving market internals as a reason to be bullish. One area of the market that’s keeping technicians optimistic, is the Technology sector. In a recent report from The Chart Report, Dan Russo pointed out that Technology represents the largest weighting in the S&P 500. In addition to being the largest sector of the market, it’s also the best performing sector, up over 16% so far in 2019. Strength from such an important sector is evidence of a healthy market and shows signs of risk appetite. 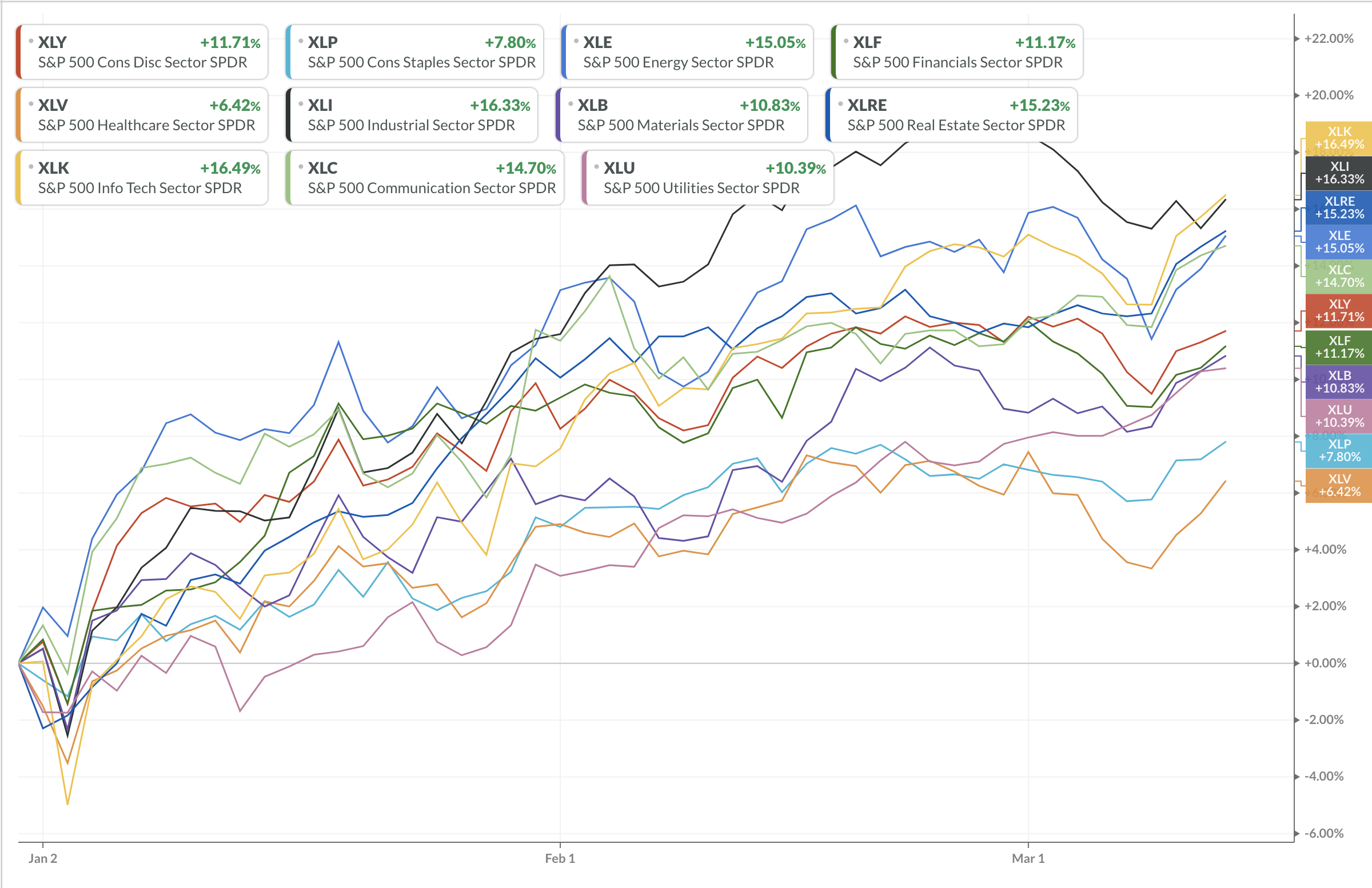 Above is the normalized performance of the 11 sectors of the S&P 500 so far in 2019. Notice how the Technology sector ETF ($XLK) in yellow has surged to take the lead in recent days.

Yesterday on Bloomberg, Todd Sohn of Strategas Research joined host Abigail Doolittle, to discuss Technology stocks and why he thinks they’re heading higher. He begins by emphasizing that Technology is outperforming the broader market on both a cap-weighted and equal-weighted basis. This shows broad participation from the individual components within Tech. If cap-weighted Tech was outperforming, but equal-weight was not, it would suggest that the strength is coming from only a handful of the largest stocks within the index. He explains: “It’s not just Microsoft, Apple, and Adobe outperforming here, its the whole group.”

They then go on to discuss Chinese Tech stocks as a higher-beta way to trade a rally in Tech. He presents a chart of the Chinese Technology ETF, $CQQQ and points out that the index has seen a 40% decline, similar to ones it saw in 2012, and 2015-2016. In both instances, the index went on to recover and hit all-time highs.“Both those declines had a repair process ahead of itself, I think that’s what’s going on here in 2019, I would be a buyer of pullbacks on the Chinese Tech names toward the $43 level.” 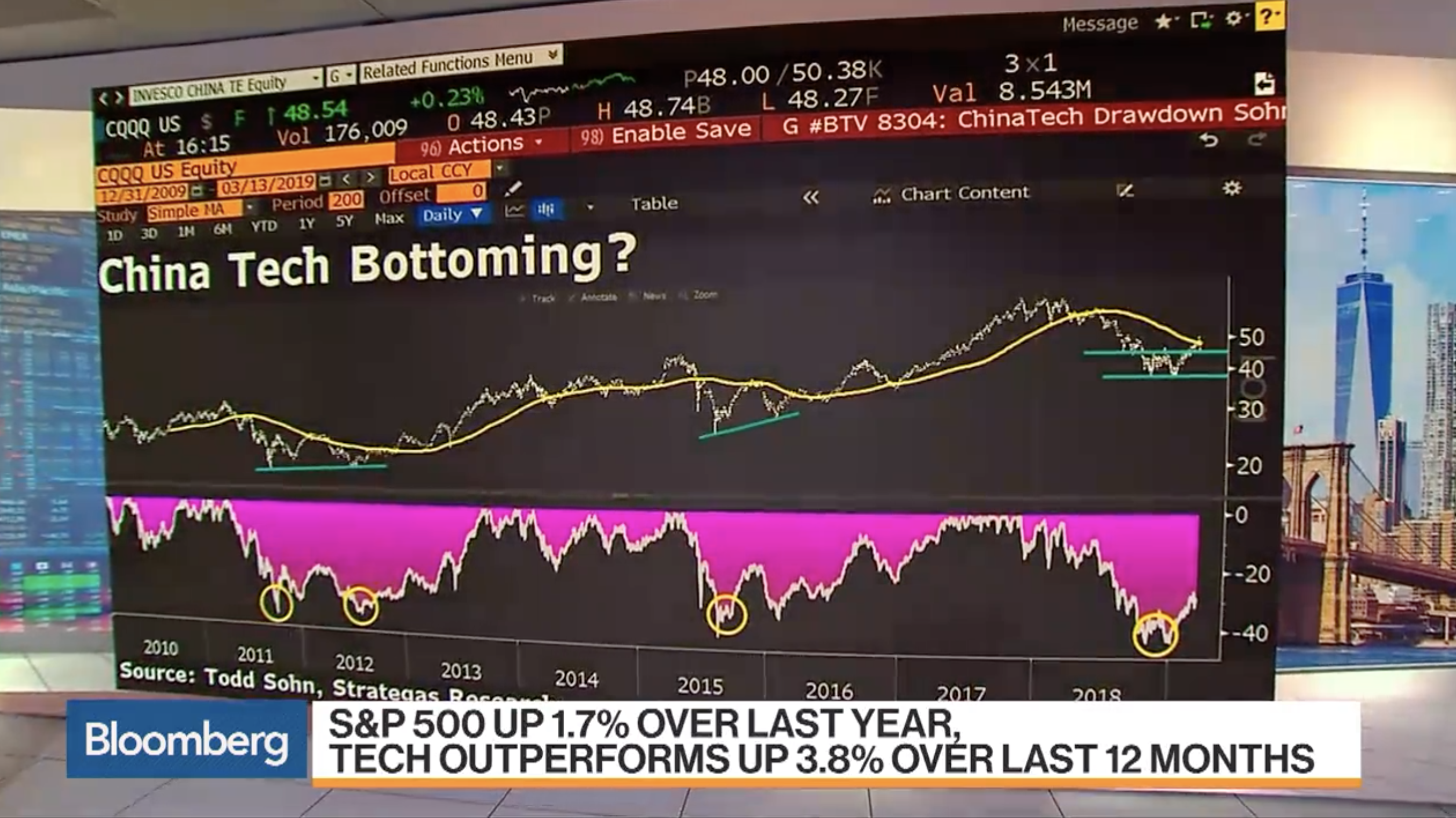 Lastly, he breaks down a chart of Apple inc. ($AAPL) and why he thinks the stock is a buy here. He shows the chart below to illustrate the bottoming process Apple is going through.  Interestingly, Sohn has a contrarian view of Apple and says: “analyst recommendations for those who cover this stock are at decade lows. We love when stocks go up on bad news, on skepticism. There’s a ton of negative headlines out there for Apple. We think this is one where you want to use any sort of dip to the $160 area to add exposure to.”

Sohn makes some compelling arguments for being bullish on Technology. When asked about the 2800 level in the S&P 500, Sohn expressed that he thinks we can get over the hurdle but would like to see other sectors like Financials and Industrials pick up the slack. Check out the full interview here. We’ll continue to keep an eye on these trends and report back with any major developments.