It’s that time of year again, a time when the trees are back to blooming, flowers are potted and planted and garages are starting to have a sense of cleanliness once again. There is a feeling of refreshment and rejuvenation after a long winter. In a way, this is exactly what’s taking place in the Dow Jones Industrial Average, a need for cleanliness after 6-8 months of melt up, bear market talk, and bull market beginnings. We want to give a sense of ‘spring cleanup’ to the industrial average and more of a detailed look at some of the hot topic individual names that seem to be making headlines, both good and bad.

Let’s start with a well-known favorite and a stock that offers more of a defensive stance, but can play offense as well, in $WMT. @optionsaction recently noted the relative strength seen in Walmart compared to that of the $SPX.

On a day the Dow swung 450 points, is there anywhere to hide? Chart Master Carter Worth has one idea. $WMT pic.twitter.com/B9dnL9OzxL

We also see solid strength vs. the Dow Jones Industrial Average over the same time period and more recently breaking out…$WMT reports earnings this week on Thursday before market open. 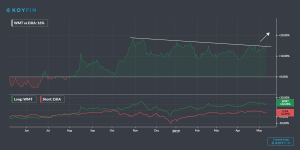 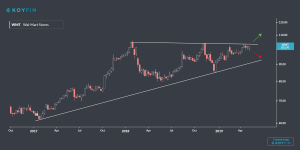 Continuing along with the cleanup discussion, next up would be the heavy hitter, Boeing ($BA), which has seen quite the publicity in 2019. Arthur Hill, CMT (Senior Technical Analyst at stockcharts.com) recently tweeted a breakdown situation that is taking place right on the 200-day MA. This stock has been prone to negative headlines of late, and timing a headline event is essentially impossible. However, breakdown situations like this continue to point toward a risk-off structure for the time being. Can the environment change, absolutely! But the evidence of risk-on in $BA looks to be minimal, at this point in time.

$BA is by far the highest priced stock in $INDU and the largest component of $DIA (9.3%). The stock gapped down in March, consolidated into April and broke a triangle line this week. BA also broke the 200-day. pic.twitter.com/WNbhj985g4

With a ~9.3% weight in the $DJIA, the cleanup that’s taking place in $BA will certainly have an impact on performance. Ralph Acampora recently tweeted more of a warning shot to followers, as the Dow has critical components testing important up-trends.

The current market weakness is seriously re-testing or in the case of the DJ Industrial Average breaking 50-day moving averages. This follows the penetration of many important uptrends. Be watchful – further weakness is expected.

A name that is not looking to violate any downtrends and garnering a lot of attention, or at least its sub-sector is… The Travelers Companies ($TRV) part of the property and casualty insurance industry, which has a 3.75% weighting in the Dow Jones Industrial ETF – $DIA, and 4.57% weighting in $IAK (US Insurance iShares). Tom Bruni, @brunicharting recently gave a nice perspective on the insurance industry in this post on allstarcharts.com.

Although he does not specifically point out $TRV in the post, he makes a solid point on the insurance industry outperforming during a potentially mixed performance index environment. If insurance is going to start proving it has legs to the upside, $TRV is a great starting point to get your feet wet. With a top ten weighting in Dow Jones Industrial Average, we firmly believe this could provide a healthy type of ‘spring cleanup’ for the index, and has proven to be thus far. But enough of the chatter, take a peek at the chart to see for yourself… 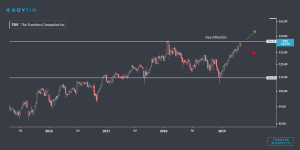 The weekly highs from 2018 are being tested and this current inflection point is one to take note of. If the insurance industry as a whole is going to continue its relative strength vs. these indices, we would think that $TRV has no problem breaking to the topside here and advancing forward.

Although Papa Dow may need a spring cleanup here to fully engage itself for the summer, there are situations that warrant some detailed attention. During any type of cleanse or cleanup, one must dust off and get detailed. Refreshment and rejuvenation is something we can all take part in, even if it means taking 30 stocks in the $DJIA and giving them the ‘clean up’ they deserve.