For a majority of the year, the underperformance of Small-caps has been one of the more valid arguments that the bears have had for betting against stocks. However, in the past week, Small-caps have made an impressive comeback. As a legendary trader, Peter Brandt points out in the tweet below, this eliminates what has been one of the biggest concerns for this market. 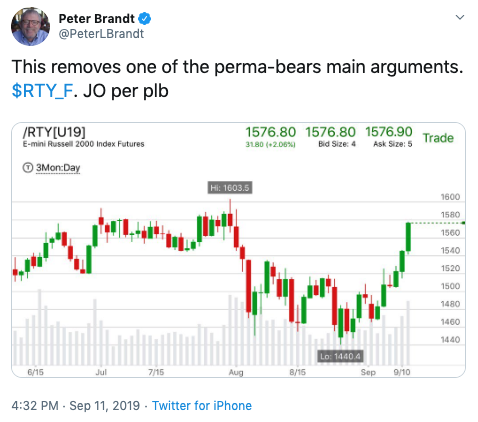 Small-caps are often used to gauge the level of risk appetitie that exists in the market. When Small-caps are outperforming Large-caps, it shows that investors are willing to own more volatile and risky stocks. Stocks as an asset class are likely to do well in that sort of risk-on environment.

Here’s an interesting stat from Dana Lyons. He points out that the Russell 2000 outperformed the S&P 500 by over 1% for three-days in a row this week. He adds that this is a rare occurrence, as this is only the 10th time that it has happened. 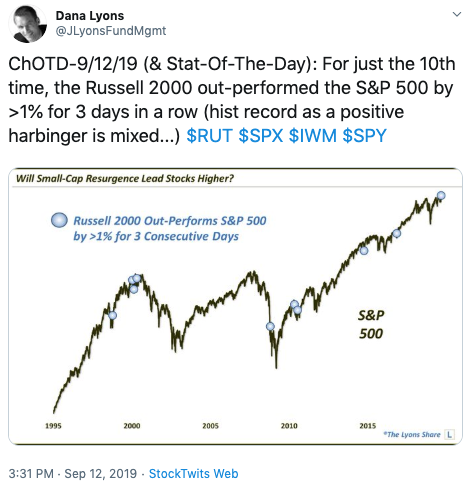 The chart below shows the performance of the Russell 2000 ETF, $IWM relative to the Large-cap Russell 1000 ETF, $IWB. When the line is rising, it means Small-caps are outperforming Large-caps. Conversely, when the line is falling, it tells us Small-caps are underperforming Large-caps. As you can see, Small-caps have underperformed since July of 2018. The ratio is still in a nasty downtrend. However, the sharp recovery in the past few days is hard to ignore.

The orange indicator in the bottom panel of the chart shows the 5-day percentage change for $IWM/$IWB. In the past few days, Small-caps have seen one of the sharpest 5-day rallies, relative to Large-caps in over 2-years. 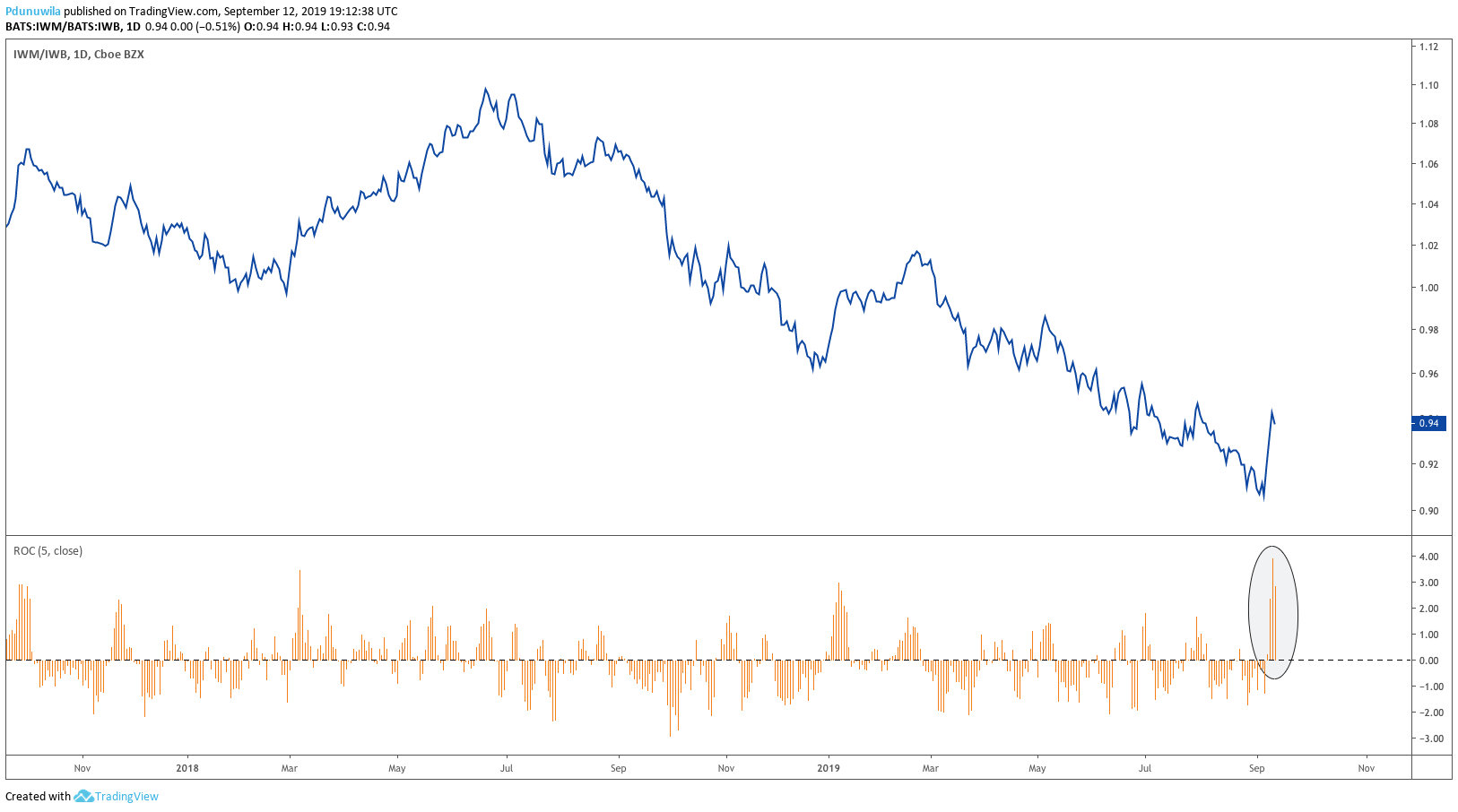 On an absolute basis, things look fairly bullish for the Russell 2000. RSI never reached oversold conditions even when it sold-off in May and August, as shown in the daily chart of $IWM below. You can also see that price is approaching a level that acted as resistance the past four times it was tested. Typically, a level gets weaker and weaker each time it’s tested. Will the fifth time be the charm? 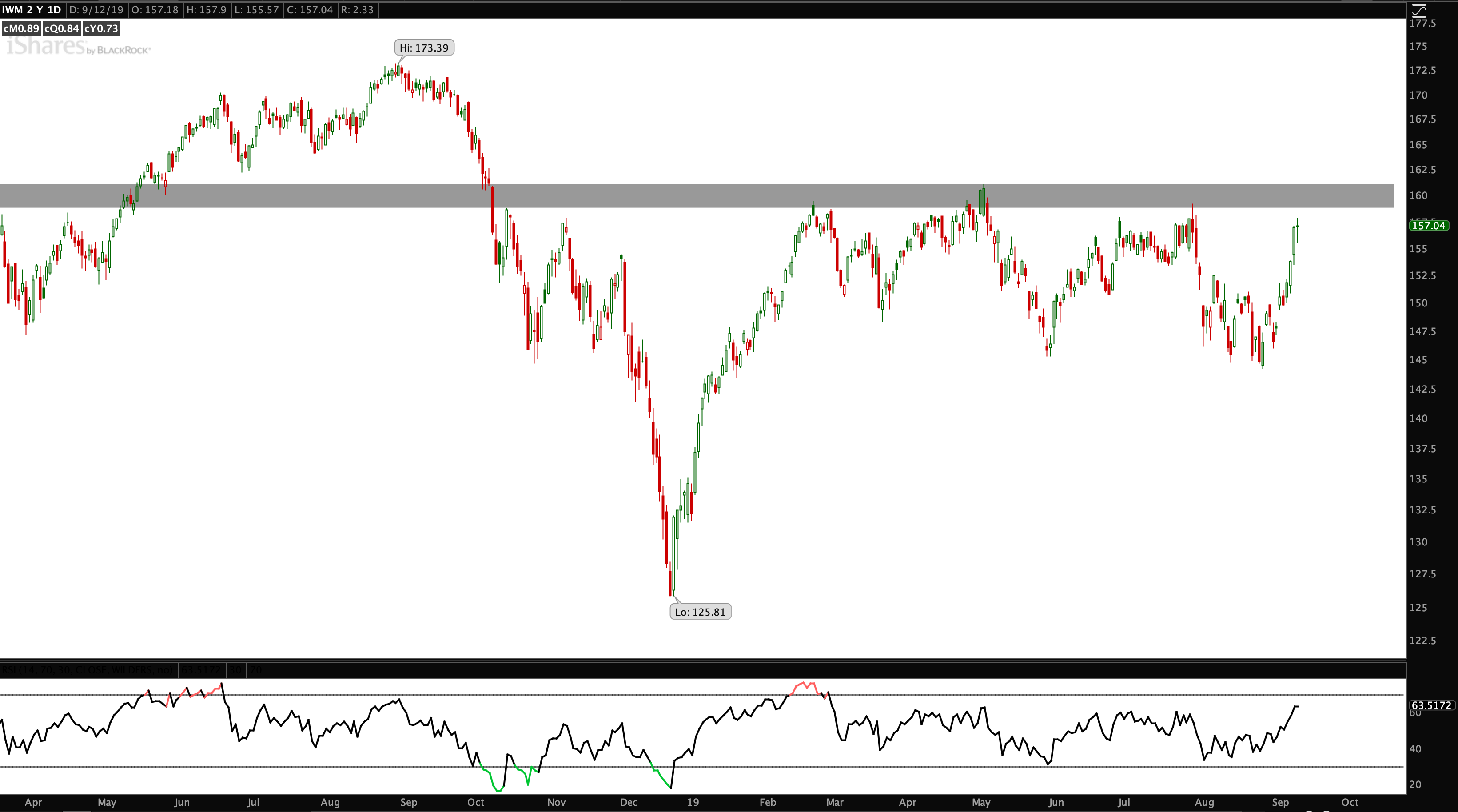 The Russell 2000 is still about 9% off its high and is the only major index that hasn’t printed an all-time high in 2019. However, the recent price action is certainly constructive to the bull case for stocks as it suggests that Small-caps could be staging a comeback. We’ll be sure to keep an eye on this and report back with any significant developments.