The underperformance of Small-cap stocks has been a big part of the bear case for US Equities this year. However, according to seasonality, we could see Small-caps begin to outperform their Large-cap peers going into the end of the year.

Seasonality expert, Jeff Hirsch shared the chart below in a blog post titled; Open Season for Small Caps. It’s a seasonality chart of the Small-cap Russell 2000 relative to the Large-cap Russell 1000. The chart compiles 40-years of data to illustrate the relationship between Small-caps and Large-caps in an “average” year. When the line is rising, it means Small-caps are outperforming Large-caps and vice versa.

In an excerpt from his book, The Stock Traders Almanac, Jeff explains this chart further: “In a typical year, the smaller fry stay on the sidelines while the big boys are on the field. Then, around early November, small stocks begin to wake up, and in mid-December, they take off.” 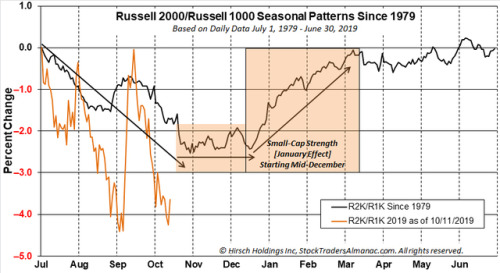 He adds, “Small caps hold the lead through the beginning of June, though the bulk of the move is complete by early March.”

We saw this pattern play out this year. Below is a year-to-date chart of Small-caps ($RUT) versus Large-caps ($RUI). Notice that Small-caps were outperforming at the beginning of 2019, but started underperforming in March.

I mentioned that the underperformance of Small-caps has been a big part of the bear case for stocks this year. Bulls typically want to see Small-caps leading the market because it demonstrates risk-appetitie among investors.  Therefore, if Small-caps begin to pick up strength relative to Large-caps in the near-term, it would eliminate part of the bear case and send a bullish message to the broader market.

We’ll continue to keep an eye on this and report back with any major developments. As always, feel free to contact us with any questions.