The S&P 500 has gained roughly 20% off its lows from Christmas Eve. Despite this impressive rally, every major index and almost all S&P sectors remain below their highs from 2018, many of which were all-time highs. But two areas of the market gave both bulls and bears something to cheer about this week as the most defensive sectors, Utilities ($XLU) and Real Estate ($XLRE) made significant new highs. In a Trading Nation segment this week, Mark Newton came on to discuss the technical outlook for what CNBC host, Mike Santoli referred to as the “two sectors that get the least attention.”

When New Highs Are No Good

What in the world could be bearish about new highs? Santoli describes the action as “counterintuitive” and Newton says “it’s odd to see that happen when the markets are rallying.” This is because Utilities and REIT’s typically outperform in a risk-off environment while they underperform in robust bull markets, propelled by strong economic growth and cyclical forces. In a slow growth economy, it is common for investors to seek out the highest yielding stocks. REIT’s and Utilities offer a 4.3% and 3.3% yield, well above both the S&P 500 and 10-year note, which offer 1.8% and 2.6%, respectively. Newton attributes the relative strength in these sectors to “the threat of an economic slowdown” and the fact that “yields are very, very low,” not just in the US but around the globe. Bears will make the argument that this lack of risk-appetite is a sign of impending stock market weakness.

In the CNBC segment they mention Utilities and REIT’s have been outperforming on a month-to-date basis. While this is true, they have actually been leading for much longer than just the last two weeks. Returns since the S&P suffered a 3% one-day decline on October 10th – sparking the Q4 sell-off – show that the safety trade has been in effect for over 5-months now. Only REIT’s, Utilities and Staples are positive since October 9th (excluding $XLB, +0.41% on total return basis), with $XLU +8.5% and $XLRE +12.3%.

“Utilities and REITs Have Both Broken Out”

Newton highlights this week’s moves to new all-time highs for $XLU and $XLRE. Note that despite making a decade-long high, the iShares Real Estate ETF, $IYR is still about 10% below its 2007 all-time high ($XLRE began trading in 2015).

As you can see in the daily chart of $XLRE below, it has been marching steadily higher since December. After eclipsing prior record highs (from August 2016) around $34.80 in February, price consolidated in a flag for about a month before resuming higher this week.

Refer to Newton’s weekly chart below, showing Utilities breaking to new highs with the relative strength indicator (RSI) in the lower pane. Make note of the RSI – despite hitting overbought readings on a daily basis, the weekly RSI for $XLU and $XLRE both failed to register bullish readings above 70 on their recent breakouts. 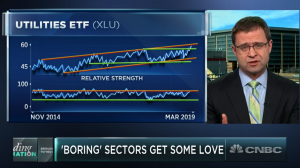 “Look to Take Profits… I Don’t Think This Outperformance Continues”

When asked what the outperformance in Utilities and Real Estate means for the broader market and whether he expects it to continue, Newton expressed doubt. While he believes “we could see a bit more strength” in the next 3-5 weeks and that “near term, it is right to be in them from a trading perspective,” he warns that “if S&P gets above March’s highs then the groups likely are about to stall out, slow down and really roll over.” This thesis started to play out in the very short term on Friday as the S&P pushed up against its recent highs while $XLU and $XLRE retreated to close about 1% off their intra-week highs.

To be clear, new highs in any equity sector is never a bearish development. If only Utilities and REIT’s are making new highs while other sectors are faltering, that would be reason to worry. But that is not what we are seeing as every sector has participated in the recent rally. Another well-known technician, JC Parets often points out that “contrary to popular belief, higher prices for utilties stocks is historically consistent with higher stock prices overall,” as he mentioned in a tweet from March 3rd. It is hard to argue with his long-term chart below, showing Utilities and the S&P trending together for the past three decades. 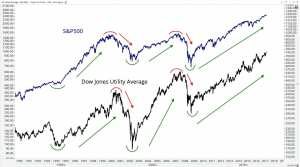 Utilities and REIT’s only make up a combined 6% of the S&P, so the fact that $SPX has made such a nice move off its lows is evidence alone of positive breadth. With large-cap technology ($XLK) just about 4% off all-time highs and pockets of strength showing up in sub-sectors such as Software ($IGV) and Medical Devices ($IHI), which are also back to new record highs, it would be imprudent to turn bearish on the broader equity market. With that said, this is something to monitor, as we need to see the major indices and more cyclical areas of the market make new highs as well before having conviction that stocks will continue to trend higher over the long-run.