Earlier today, Dan Russo, Chief Market Strategist at Chaikin Analytics, gave us his thoughts as to whether the latest uptick in equities prices should be trusted or not. One of the best things about following Dan’s daily “Stock Market Today” videos (put out each morning) is that he is extremely consistent and systematic in his approach to analyzing the markets. I have been a fan of these for a while now because of these reasons.

One important note that Dan points out is that the reversal was led by Technology stocks (the largest weighting in the S&P 500) and the Nasdaq index. Regarding the S&P 500 itself, there are also some bullish indications out there. But the big questions remains: can we get over 2820?

One important development is that the Daily RSI remained above 50 during the correction last week and has bounced along with price. The Chaikin Money Flow index is still above 0, which is a positive as well. Dan says this increases the odds that we will eventually break above 2820. Does it happen this week? Who knows. Dan mentions that a choppy sideways move is “absolutely” a possibility.

So, what else should we be looking at? We need to be watching leading stocks in leading areas of the market, according to Dan. This includes Tech, and more specifically, names in the Semiconductor space. Relative strength in Semiconductors is a “bullish tell”. The Technology Sector was recently upgraded at Chaikin from a Neutral trend to Bullish and so far that has been a great call.

What about other sectors? Taking a look at the respective performance over the last 5 days, we can see that there is still somewhat of a “defensive” tone out there. 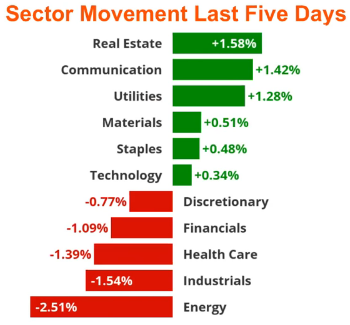 While Sectors like Energy remain at the bottom of the basket, the downward momentum in Relative Strength has started to flatten out, according to Dan. We can see this in the chart below, as Energy and the broad market has returned roughly the same percentage since late December after severe underperformance through most of 2018. While there have been bearish setups in this Sector in the past few months, there just isn’t as much “juice” to the downside right now.

Financials? Not there either. However, Dan notes that the Materials sector is starting to turn around, but there is nothing substantial quite yet. And what about Healthcare? It continues to weaken on a relative basis and is now coming into its 200-day MA versus the S&P 500.

Going back Semiconductors, this sub-industry has outperformed the S&P 500 by 5% over the last six months. As mentioned above, this remains a large focus area for Dan.

Taking it a step further, what individual stocks should we be looking at in the Semiconductors space? One name that Dan really like is ON Semiconductor (ON). There are a few reasons Dan likes this name:

Digging into why Dan likes the Technology Sector, he mentions that from a relative basis, we have moved back above the 200-day MA, along with a broken downtrend. On top of this, RSI never dipped below 30 during the correction we saw in Q4 2018 and is now working its way towards overbought status. Further, during the uptrend we have seen since the beginning of the year, there have been a series of higher lows. Taken as a whole, this is a bullish confirmation, according to Dan, and a signal that the outperformance is likely to continue.

Another Sector that Dan likes is Utilities. The RSI has reached “overbought” and while this is a bullish confirmation, he does expect a consolidation over the short-term.

Overall, there are many positive developments happening under the surface of the broad indices and this should lead to the S&P 500 eventually breaking through the “brick wall” we have experienced around the 2800 level. Two of the main keys to this occurring are Technology, and more specifically, Semiconductors.