After a stellar June and July, markets have been hit in August. So far, we saw a nearly 7% drawdown from all-time highs on the S&P 500 ($SPX), but have rebounded over the last few trading sessions. However, even being so close to these highs, sentiment remains quite bearish, as we have pointed out in the recent past.  So, what are technicians focusing on in the short-term? One widely discussed topic has been the trading range that we have been in since August 2nd. This is a very good example of the “long above, short below” mindset that many technicians take when viewing charts and planning their entries and exits.

Urban Carmel brings to our attention that price has touched the top of the range four times thus far, while only visiting the bottom of the range on three occasions:

Bulls: As they say, 5th time's the charm
Bears: Your team is behind 3 to 4. Need to score soon$spx pic.twitter.com/JJqg4gn86c

Andrew Thrasher of Thrasher Analytics gives some prudent advice. It’s hard to decipher which way this breaks, and standing on the sidelines may be the correct move in this scenario:

$SPX is in a short-term range. Until it breaks out, patience is your friend. pic.twitter.com/XRrbwlutil

Andrew Adams also sees the range as a “toss up”, but does note the lower closing highs that have been established over the last two weeks:

The key levels are pretty clear now for the short term: 2822–2943. Toss-up within that range, bullish bias above it, bearish bias below it. I hoped we'd get a daily close above 2926 yesterday but no dice. Still lower closing highs for now during this overall decline. $SPX $SPY pic.twitter.com/bzKWvAhqk0

Joe Fahmy of Zor Capital goes a step further and lays out one possible turn of events, in which the S&P 500 stays range bound up until Q4, when we’d see a sustainable upward rally in equity prices:

Carl Quintanilla shared a chart from Bay Crest Partners, in which the firm states that it has very little confidence as to which way the market moves next:

Adam Mancini brings up one interesting comparison, in that we also saw a wide, volatile trading range back in October/November of 2018. Price eventually resolved to the downside and we saw the final lows on Christmas Eve. While no one knows if this range will lead to a similar result, it is certainly something to keep at the front of your mind over the coming days/weeks:

After the recent 8% plunge $SPX is consolidating in a wide range and setting up the next large leg (like it did last Oct – Dec). Direction to be determined, but important to remain neutral and not let your macro opinions cloud your judgement on where price will go into Autumn https://t.co/LhkKdLymNT

And for a little humor, let’s all hope that Mario doesn’t travel down the tube looking for coins:

Of course, with all the talk around the most recent, short-term range that we are seeing, one could argue that this is simply a microcosm of a larger snapshot of the market. The S&P 500 is roughly 1% above its highs from January 2018. 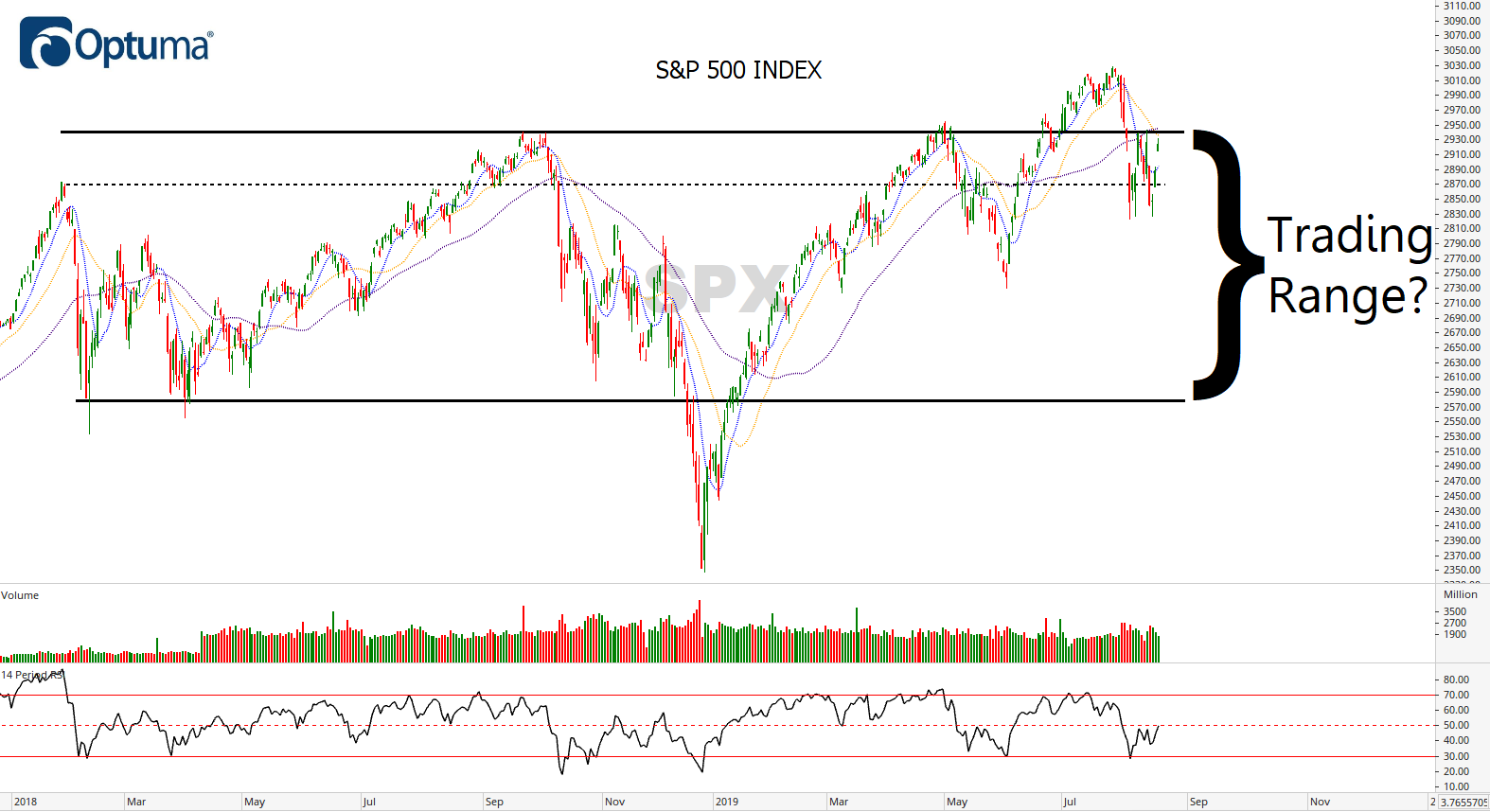 Yet, here we are almost 18 months later, and the market has been “flat” in regards to overall return (excluding dividends). Really, you can make a case that we have been in a larger, more encompassing trading range for this entire period. Whatever is to come, we know that price will show us the way. And as you’ll see in the commentary above, many technicians are watching the current trading range between 2820 and 2940 for clues. Given that insight, I would advise you to be looking at the same levels as well.