Investors in the Cannabis Industry had a rough go at it in 2019 as our benchmark, the Horizons Medical Marijuana Life Sciences ETF ($HMMJ), traded on the Toronto Stock Exchange ($TSX), fell by roughly 37% during the year, compared to a 29% and 19% annual return for the S&P 500 and TSX Composite. Also included in the performance chart below is the largest holding of the Horizons Marijuana ETF, Canopy Growth Corp ($CGC), which fell about 27% in 2019 after starting the year off red hot with a gain of about 80% through April. 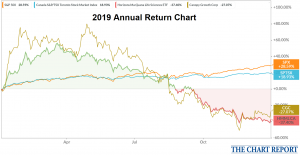 The drawdowns in some of the top holdings of $HMMJ have been drastic with $CGC and Cronos ($CRON) falling roughly 75% peak to trough as well as one of 2018’s darlings, Tilray ($TLRY) currently sitting 93% off its record high from that year. The ETF itself has experienced a 70% drawdown from its 2018 all-time high. The Cannabis space has undergone a total washout since prices peaked in the second half of 2018. With sentiment in the dumps around this once beloved growth industry, prices may finally be at a level where it makes sense to take a shot on the long side.

Certain characteristics on the $HMMJ chart make us believe we may be in for a classic trend reversal or potential mean reversion play at the least. Making this setup even more appealing is the fact that our risk is clearly defined just below current prices at the prior record low from 2017. Here is a look at the daily line chart.

The sell-off over the past year or so has put prices right back at their post-IPO record lows, which is a logical place for them to carve out a bottom and regain their footing. A potential failed breakdown and momentum divergence are also currently in play, making for a confluence of bullish characteristics creating a higher likelihood that this is the beginning of a counter-trend move. The momentum divergence can be seen in the lower pane as the 14-day RSI has consistently made higher-lows since October, despite prices making lower-lows. The failed breakdown was brief, to say the least, as prices undercut their record lows ~$8.30 for a single day in late December before reversing higher. Here is a closer look at the candlestick chart.

We will want to use the record closing low price of $8.17 from the day of the failed breakdown as our risk management level for any trades on the long side. This would limit losses to about 4% based on the current price ~$8.50. For a price target, we want to focus on the $14-15 level (refer to line chart) as this represents prior support and thus potential resistance as prices made key lows ~$14 throughout 2018 before breaking down. The 38.2% Fibonacci retracement level of the recent drawdown from all-time high to all-time low also coincides conveniently with the $14-15 level, increasing the likelihood of supply entering the market in this range. For these reasons, we want to take profits towards $14. If we get the move we’re looking for, this trade should return over 60%, which would provide a reward/risk ratio of greater than 15x based on current prices.

Taking a shot at current prices makes sense from a tactical perspective due to the asymmetrical reward/risk. From a structural perspective, these key lows would be a very logical level for a longer-term bottom to form in the space.

I want to wish all of our readers a Happy New Year and all the best in 2020! I hope you enjoyed this post, and as always, feel free to reach me at strazza@thechartreport.com with any questions or comments.