One of the market’s darling’s, Apple Inc. (AAPL) has taken a hard fall from grace as of late with shares currently down about 36% from the highs made in October 2018. The days of having a $1 trillion market cap seem like a distant memory to many investors. The importance of Apple’s stock to the overall market can’t be overstated. It’s one of the most widely held stocks by both retail and institutional investors and is one of the few components that’s included in all three of the major U.S. stock indices (Dow, S&P, Nasdaq). Many investors are trying to understand what the future has in store for the stock and how the tech giant’s performance will impact the overall market.

After Apple’s 10% drop yesterday Yahoo finance interviewed Oppenheimer’s chief technical strategist, Ari Wald, to help viewers get a better understanding of where the stock is headed. Wald begins the segment by saying that historically these big sell-offs have proved to be excellent buying opportunities for long-term investors. He goes on further to explain that there is still a concern in the fact that the price has fallen under it’s 200-day moving average and has continued to decline since then showing no sign of bottoming. Wald urges investors to be patient and expects to see some support around the $134-135 level. This is a key level to watch because it represents the 2015 highs and typically former resistance often becomes support when broken. 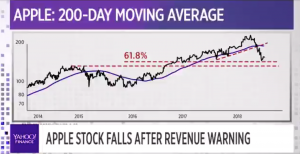 Wald adds that this is not the first meaningful drop and the stock has seen prior declines similar in magnitude in 2013 and 2016. Those two prior declines lasted 7 months and 13 months respectively and this current decline has only lasted about 4 months which suggests the stock may need some more time before it stabilizes and a bottom has been made. He goes on to explain that large declines like this often take some time to recover from and investors should expect muted, range-bound performance for some time before any upside targets can be expected.

One guest asked Ari if he thinks it’s possible to see Apple’s stock fall under $100 a share. He explains that this is an unlikely outcome and that in order for it to happen it would probably be in the context of a large economic downturn and that the technology sector, in general, is less vulnerable than sectors with more global exposure like energy, industrials, and materials.

After discussing Apple they move on to discussing the overall market and what he’s looking at for signs that the market has bottomed. Ari shows a breadth chart of the percentage of stocks above their 200-day moving average on the NYSE. Right now this breadth indicator is at a deeply oversold level signaling a good long-term buying opportunity but not a great short-term signal. He argues that signs of broadening participation are key and that will be what separates a mere bear market rally from a new bull market. To watch the full Yahoo finance interview with Ari click here.