The market is going this way, no its going that way. Maybe this way, and maybe the other direction because of this reason over here. This is likely the rhetoric you hear from pundits, social media, and maybe even your beloved financial representative. It’s confusing, I know. I’ve been there, jumped through and around the hoops, and listened to the typical nonsense. But maybe, just maybe, there is something, some story that we can grasp onto right now that can paint a more clear picture of what’s taking place in the market today. You know, reality. For that, we want to take you down the path of breadth. That something is called “new highs”. Can new highs really shed light to any significance? Is this metric really worth our time at the end of the day? Let’s find out…

I want to first start out with a video piece from CNBC featuring Chris Verrone (@verrone_chris). You’ll notice the beginning sentence or two here is key and speaks to the current market environment from a breadth perspective and more specifically new highs.

“One of the important characteristics of a durable advance is participation broadening out..”

Chris then goes on to say…

Chris isn’t just making this stuff up on the fly. The 52-week high data is indeed expanding, as shown below. This chart is from Frank Cappelleri (@FrankCappelleri). You have the $SPX on top in red and in blue you have the number of new 52-week highs for $SPX. Toward the end of last week, we were seeing breadth thrusts in many indices showing an expansion of 52-week highs over 52-week lows. 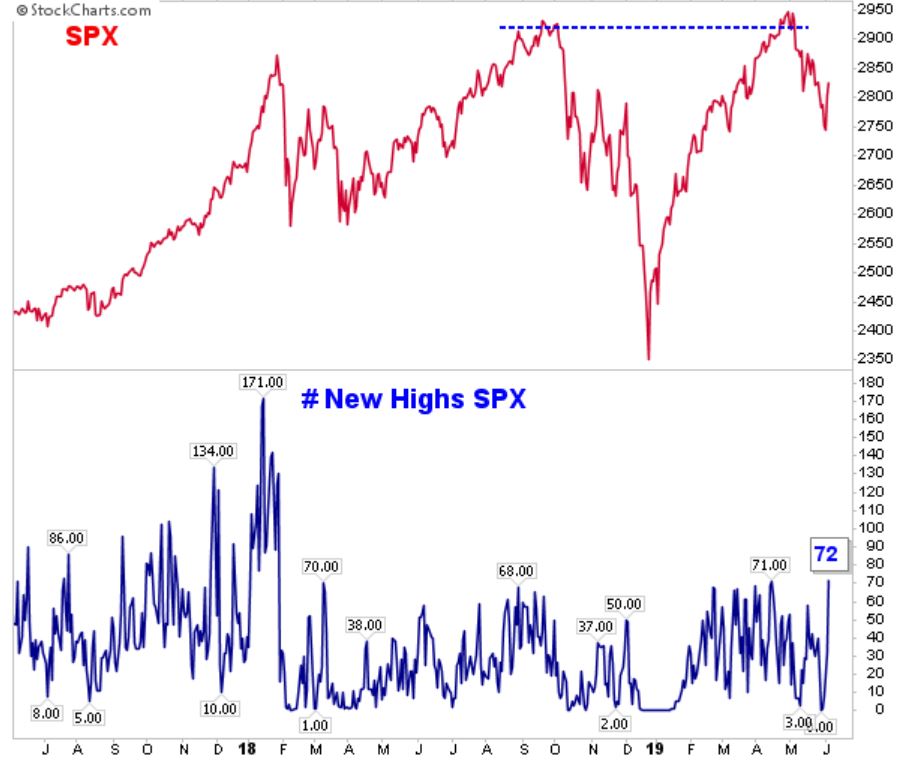 As shown above and below, this expansion is healthy to see, and speaks to the broad participation Chris and many other technicians are starting to observe. We can see by many of the domestic indices below that we had a strong thrust coming from the high-low percent measure. This has since faded off this week, but the main point here is that the thrusts were some of the highest readings we had seen since 2018. The NASDAQ 100 ($NDX) is the only index that showed stronger thrusts off the lows in January of this year. The $SPX, $MID and $SUP (S&P 1500) all had larger thrusts and this is definitely something to take note of. The disappointment in the below image is the non-participation from small caps – $SML. No HLP thrust over 10 percent to be found at all this year, even off the lows from December. We have to go back to August of last year to find the last HLP thrust over 10%. 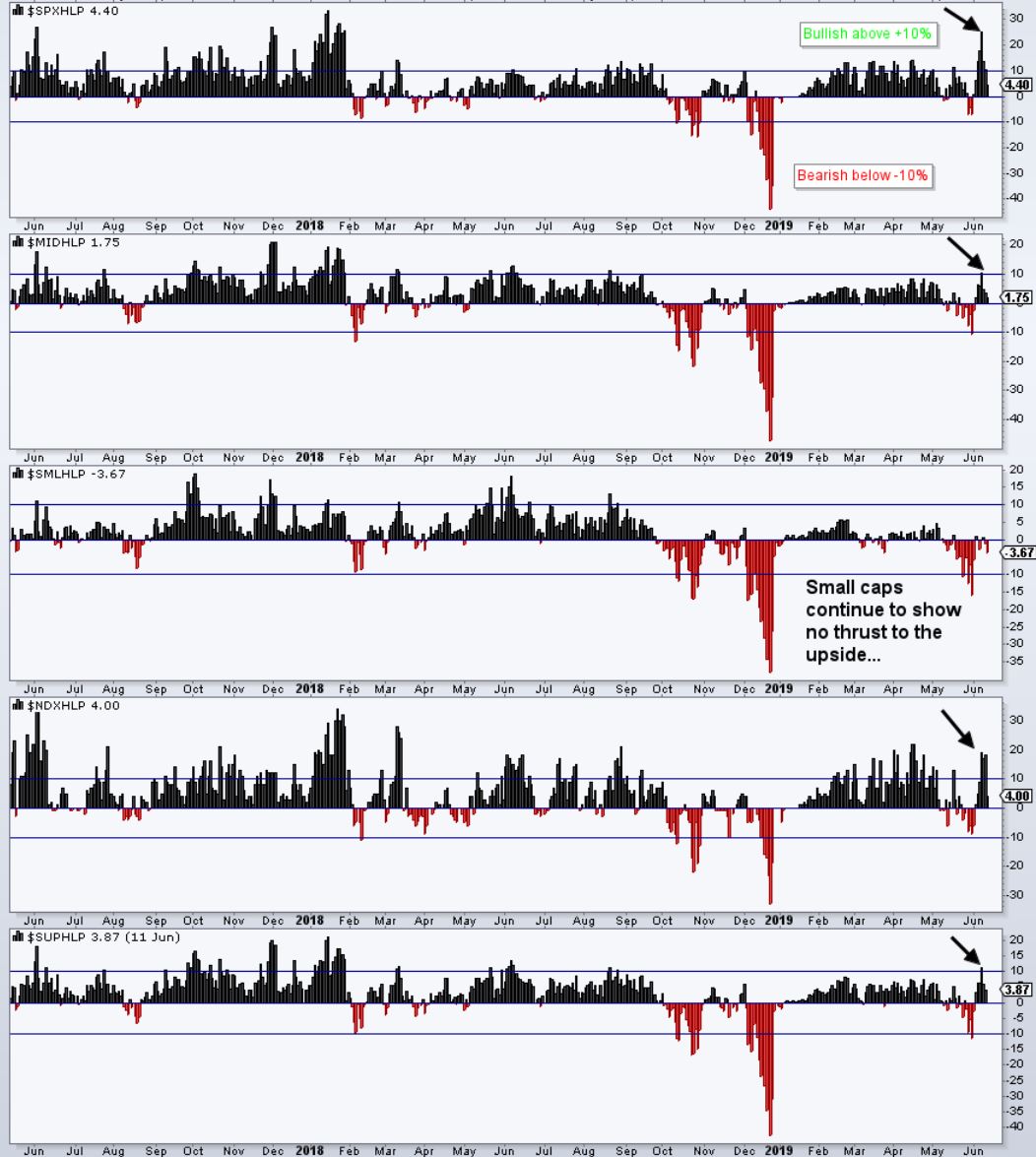 Something to note with the above histogram chart is that only a few weeks prior we were seeing negative HLP thrusts to the downside in three out of the five indices shown. So, with the chart above, current day sits fairly strong, but what we really want to start seeing are periods like the 3rd and 4th quarter of 2017. We had the pure definition of broad participation at this point in time. Maybe we can start inching our way to similar readings in the near future, continuing to broaden new highs in the market. Another measure of this is using the NYSE – New Highs – New Lows, this also hit a very impressive surge last week, and looks to try and hold above the zero line for the time being. Much like the rest of the breadth measures, we haven’t seen a move over 200 new highs – new lows since early 2018.

We want to continue along the theme of new 52-week highs by examining a few stocks that have been hot ticket items in the market for years now but haven’t shown this ‘new high’ mentality quite yet. When I say hot ticket items, I’m really talking about FAANG++, $FB, $AAPL, $AMZN, $NFLX and $GOOGL (there are a few others but for the sake of time we’ll keep it at this). Does anyone want to take a guess at how many of these names have made new highs relative to their 2018 highs? One, only $GOOGL. It was able to register a new closing high in late April of this year, only to reverse course quite sharply after the fact. 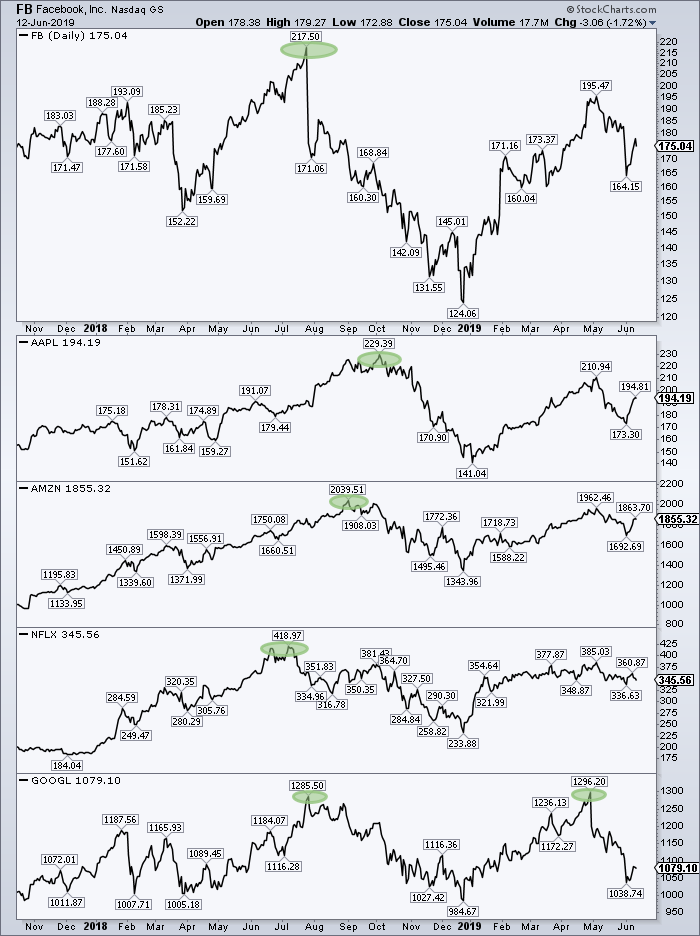 Does this fact alone tell us anything? Maybe, maybe not. I think by now we can all agree that the FAANG stocks should not be the only barometer this market has, nor should it be the only stocks we pay attention to on a day to day basis. However, the point remains, if we are seeing the rest of the broad market start to show signs of 52-week highs, essentially taking out highs from 2018, shouldn’t we start to see this in some of the mainstream names like FAANG as well? It’s something to ponder, and something we will have to keep monitoring for on a day to day perspective. We are not the only market participants asking this question, Todd Gordon (@toddgordontrade) has taken the same questions and started digging deeper.

The major point he eludes to is that FAANG has been underperforming for a while now, this is not something new that we should all of a sudden become surprised about. He does point out however that $NFLX is one of the better FAANG names to keep your eye on as it tries to consolidate over the past few months. On the charts, it certainly holds up relatively well compared to the others mentioned, so keep a close eye on this one and see if in the near term we can finally see another new high register.

Are blue skies right around the corner for this market with new highs starting to broaden out respectively within some of these indices? Quite possibly, the breadth thrusts are certainly part of the evidence, but there is a lot of work left to do in terms of price action. It’s the classic, there’s good, there’s bad, and there’s ugly narrative. Breadth readings, like the 52-week high measure, are something we can monitor to help us navigate between the storylines, between the social media posts, and between the financial representative. To further answer the question, we do believe there is significance in 52-week high data. Enough significance that it is probably one of the better breadth tools out there from a simplicity perspective. We all know the saying, the trend is your friend, and new highs are a very important aspect of uptrends.