Frank Cappelleri, Chief Market Technician at Instinet, was on RealVision’s Technical Trader segment discussing the recent rally in Micro-Caps. In this video, Frank deep dives into the current and future outlook of the group. While this video was filmed on January 23rd and released for the public viewing on January 30th, it provides a lot of insight that is valuable looking forward today.

IWC, the iShares Micro-Cap ETF, has rallied 17% in the past 5 weeks. For those following the market, it is not the only index that has ferociously rallied since the December 24th low. What is important is IWC has been one of the top performers during this time. As Frank notes, “it’s most prevalent that in January we saw relative outperformance by IWC early on in the collective market rally.” To see the most speculative stocks counter rally the hardest give investors a good gauge on risk-appetite of the current environment. As we head into February, investors will want to continue watching Micro-Caps for signs of or lack of leadership. 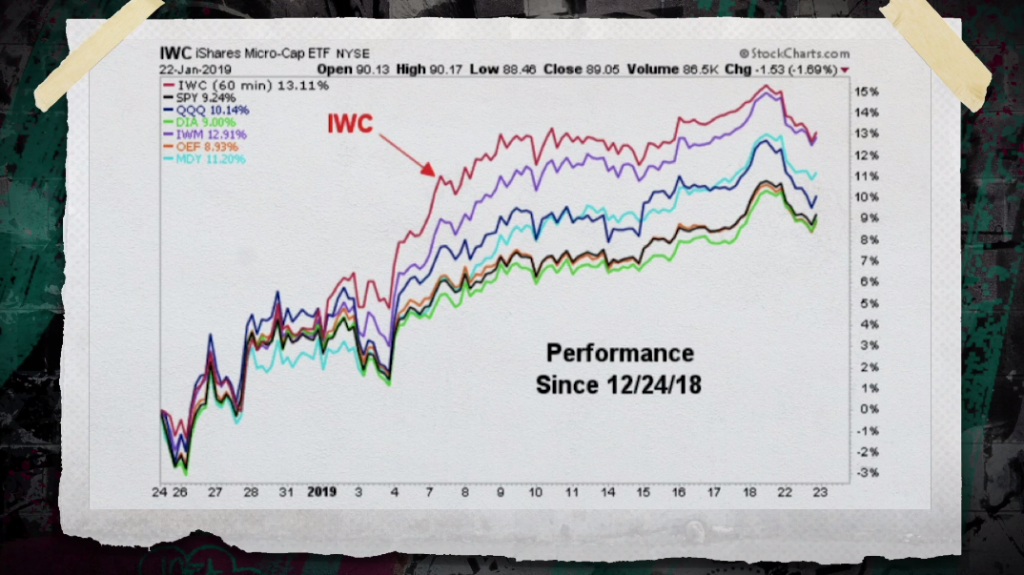 Micro-Caps are no stranger to being the leading equity asset class. In March 2018 while the S&P 500 was retesting the January low, IWC was making a higher low. IWC broke out to all-time-highs in May while it took the S&P 500 until August to do the same. In the late 3rd Quarter, Micro-Caps negatively diverged while S&P 500 slowly crept higher. We all know what happened next. 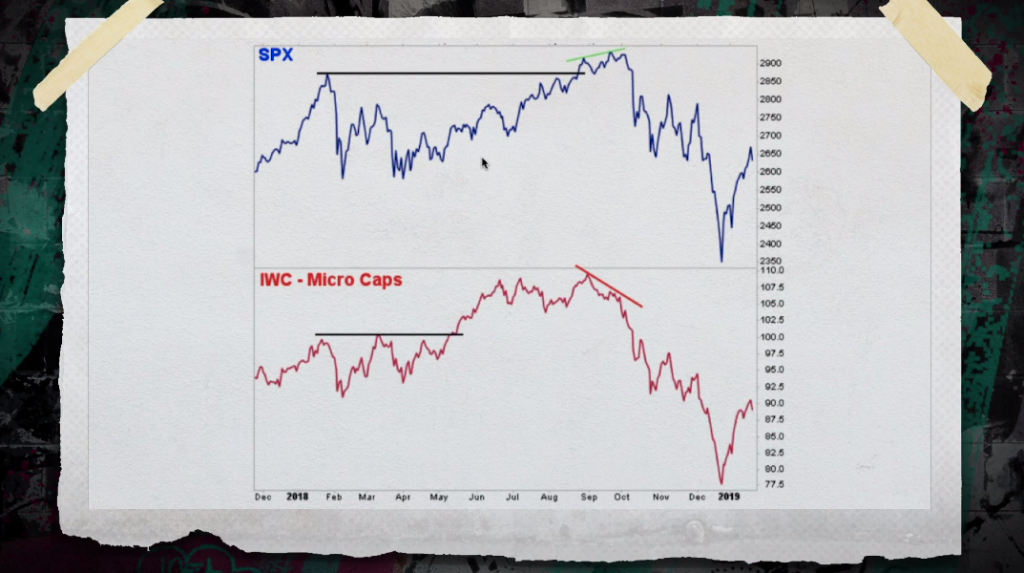 Frank brings up an interesting data point from his research. As of January 18th, IWC had the largest 4-week percentage gain since 2011, returning 16%. In the chart below, the green circles represent anytime IWC had a 10% 4-week return. The red circles represent what happens following a 10% return 4-weeks, and the red lines represent the peak of the such 4-week rallies. Frank notes that “large percentage gains usually come after stressed market environments” and “we can’t expect that the worst is over after such a large rally off the low.” Dating back to 2010, almost every weekly close of a strong 4-week rally was violated at some point in the future. “This shows chasing overbought 10% rallies did not pay off in the short term,” Frank concludes. 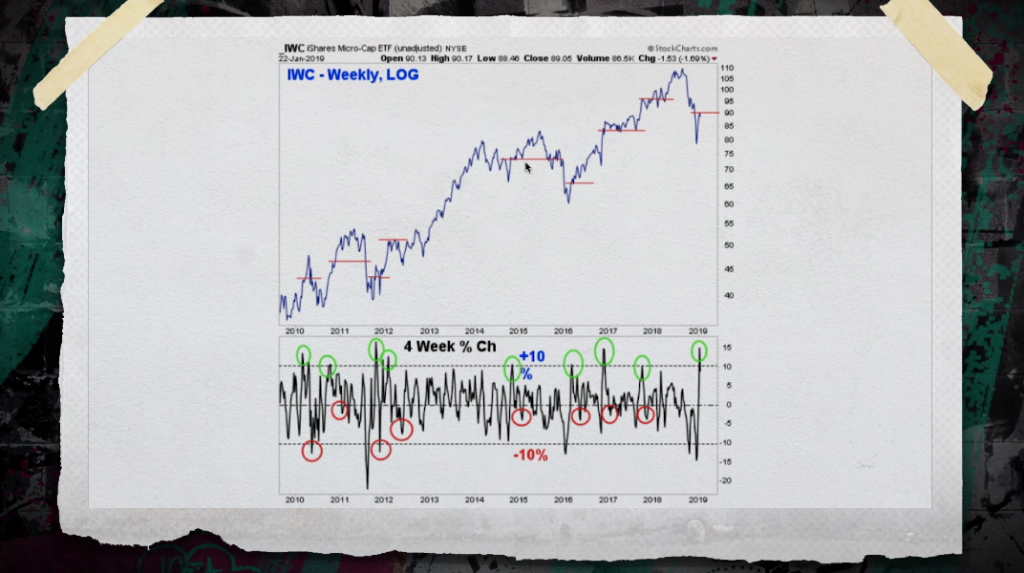 Looking at the IWC price chart, despite a meaningful rally we are still yet to break a series of lower-highs. Momentum continues to stay oversold and has not been overbought since June. 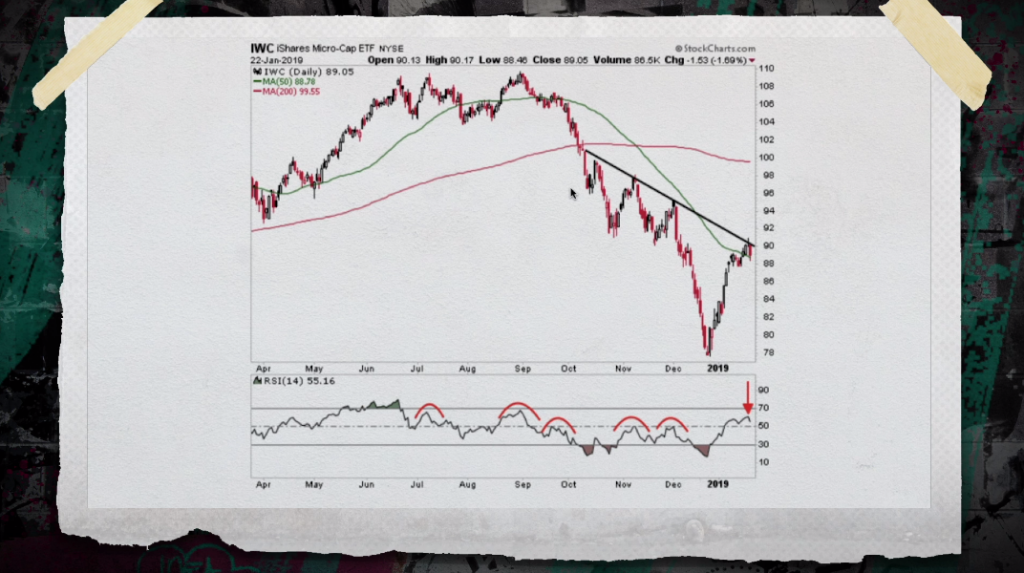 Relative to the S&P 500, Micro-Caps have been underperforming. The correction in Q4 was even more substantial from a relative perspective and the recent rally traded back into clear overhead resistance. It is also important to recognize each rally in IWC/SPY since September 2017 has been weaker on the RSI scale. 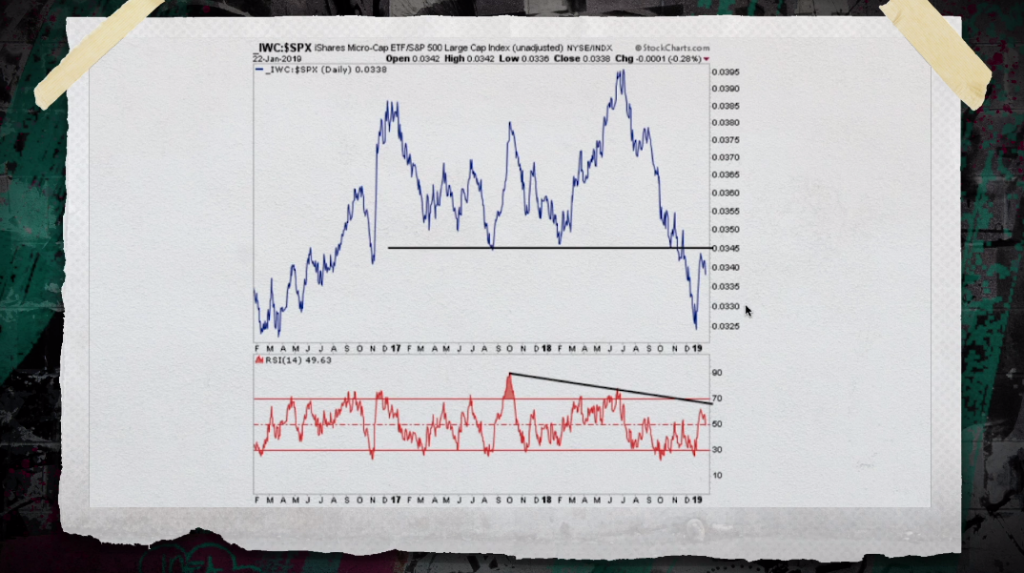 To fully understand Micro-Caps, investors have to go dig into the ETF as there are over 1,500 components. The sector weighting in IWC is heavily favored to Healthcare and Financials, which alone make up 50% of the index. Half of Healthcare is Biotech and half of Financials are Regional Banks. This is quite different from the S&P 500 where Technology is the highest weighted sector at 20%.

Frank points out that Micro-Caps seasonally have their best performance in January. Micro-Cap Biotech and Regional Banks have individually have rallied into their respective 200 day moving averages and paused. He believes these will be key tells for IWC going forward. With Regional Bank overall performance correlated to interest rates, this is a key data point for investors to watch. Frank notes that “3% has been a key resistance and psychological point, but near-term the resistance turned support level of 2.6% is key. That is where rates bounced in early January.”

Overall, “there is enough evidence to point for lower future prices in Micro-Caps with a potential target in the low 80s,” says Frank. To be wrong, he wants to see “a break of the lower highs, for the largest components – biotech and regional banks – to regain their strength and for interest rates to get through 2.8 – 3.0% area. If the these points can come together, it may be a sign that we have been in a bottoming process that’s further along than may appear.”

If you would like to view the video in full, you can do so here.