Recently, the famed Louise Yamada gave an interview on Palisade Radio. While she covered a few topics, the one that I found most interesting was how she stumbled upon technical analysis to begin with, kick-starting a career that would lead her to become one of the most well-known technicians of our time.

Louise begins by saying that her background was actually in early childhood education when she entered the workforce as an elementary school teacher. As a single mother with a young child, scraping together money was a very difficult task.

“Every time I spoke with my broker, prices went up and then they came down again and I finally said ‘When you do you know when to sell?’ He sent me some technical analysis newsletters.”

She recalls that she first studied technical analysis under Ralph Acampora at the Finance Institute. An advanced class was taught by Alan Shaw, who actually hired her at Smith Barney. She came on board with no financial background and says she believes this allowed her to think outside of the box. In fact, she had two papers published in Barron’s.

“I always like to joke and say that I think a masters in early childhood education held me in very good stead on Wall Street.”

When asked about whether deciphering the direction of the market has become harder over the course of her career, Yamada says that she doesn’t really understand the algorithms and what they do, but does point out the fact that there are half as many stocks as there were 20 or so years ago. She also believes that buybacks have forced the market up since the Great Financial Crisis in 2007-2008.

“Overall the principles remain the same.”

This brings Louise to her outlook on Gold, which has been a hot topic as of late. She points out that the “principles” (e.g. ‘The higher the base, the higher in space.’ or ‘The bigger the top, the bigger the drop.’) do still ring true, no matter what market environment we may be in. For example, Yamada is very bullish on the precious metal, due to the fact that it is currently emerging from a large, six-year base, as pictured below: 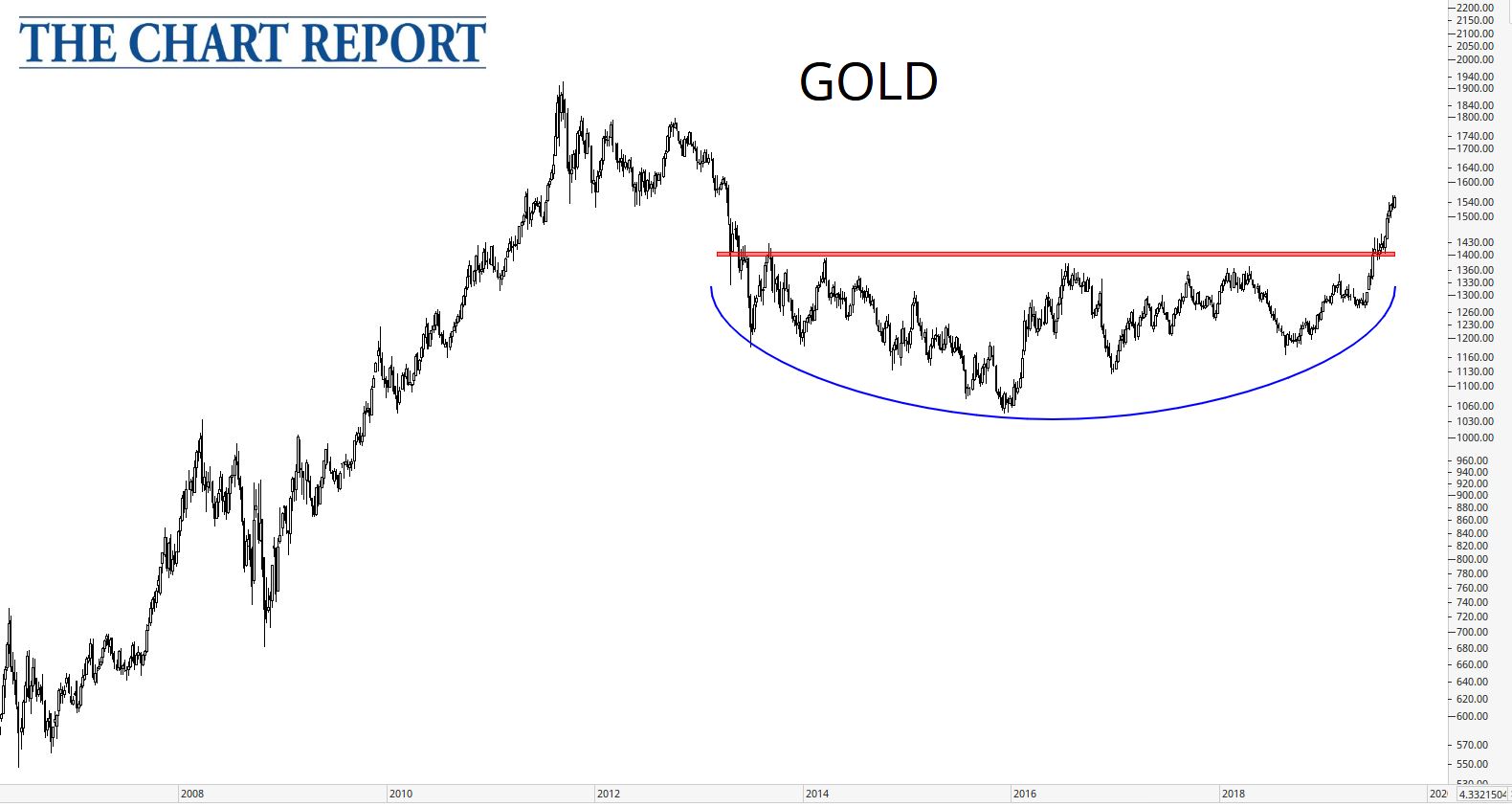 With a small period of accumulation (the “base”), you cannot expect much of a rise. But as Louise points out, if take a look at where Gold has come from and where it could go, there is a lot of potential here over the coming months/years.

“It’s a very beautiful saucer base, right off the low in 2015-2016 and the breakout through 1400 suggested that it could lift into the next resistance which if you look back towards 2011, it hit exactly 1500, which was the support of the two-year top that took place in 2011 and 2012. So, we would anticipate and recognize this is a 20% advance already, just off the lows from May. You’d have a pause here. Could it pull back to 1450? It certainly could. And I think that presents another buying opportunity.”

Louise does an amazing job of explaining so many aspects of a technical profile in the interview, including accumulation and distribution. She also gives her thoughts on supply and demand, including what she looks for in a “buyable” trend. What are the indicators under the surface doing?

“Not all indicators speak to you all the time, so that’s why we keep a good number of arrows in our quiver. If they’re confirming, then you have evidence that there should be an advance in price. It’s when they start to diverge…that brings in evidence of weakness. The longer divergences are in place, the more distrustful one becomes of the price advance.”

She notes that FAANG stocks, and particularly Apple ($AAPL), are a good example. Yamada believes the charts look like they want to go to new highs, but that momentum has been flat for the most part. 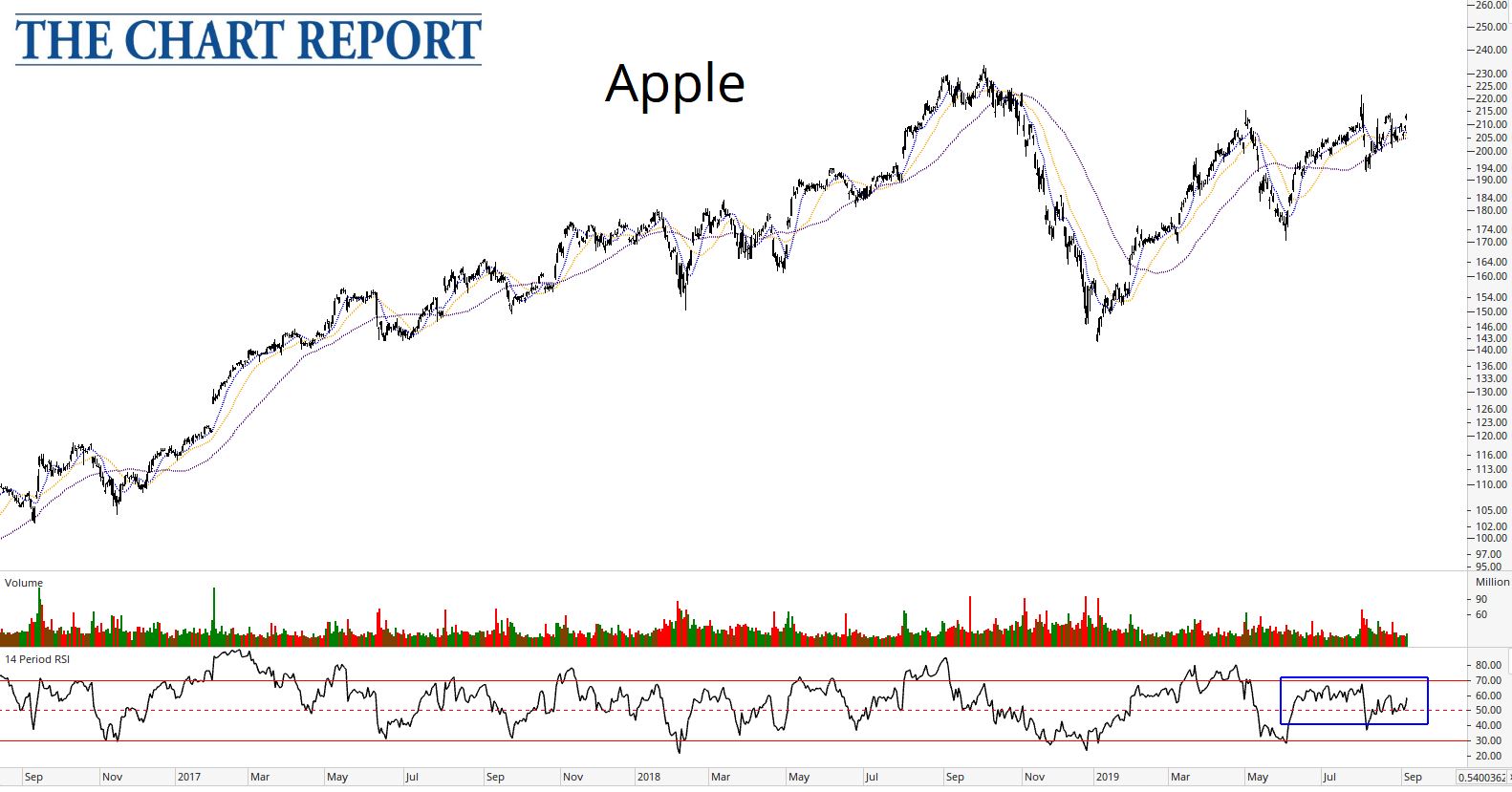 She also looks for confirmation among various timeframes on stocks and believes monitoring the Monthly MACD can be an important signal.

Something that has befuddled Yamada in recent months is volume. She points out that volume has been very low on the rallies we have seen in stocks, but heavy during the declines.

“We aren’t quite sure why that’s been happening. Volume, historically, was the weapon of the bull. And you needed volume for the market to move higher. Since the bottom in 2009, that has not been the case.”

And just who does Louise claim was the largest impact in her career when it came to technical analysis? Well, of course, it was Alan Shaw and her on-the-job training by his side. She says that one of the biggest aspects of their work involved the concept of relative strength.

And just why does she focus on relative strength?

“You don’t go into the market so that you can underperform. You go into the market so you can outperform. If you have a broad-based portfolio, and half is underperforming and half is outperforming, you’re net-net. It’s nothing. It’s helpful if you can concentrate on those sectors that are outperforming. And one of the things that is important also, from a structural perspective, is to understand where you’re trading within the overall relative strength.”

Louise Yamada, while one of the most well-respected technicians of our time, did not have the typical journey to Wall Street. However, through perseverance and genuine curiosity, she cultivated a long-lasting career in this field. It is amazing that the concepts passed down to her from her predecessors are still so relevant to this day. While many things may have changed across the macro landscape over the past two or three decades, we know that one thing has not: the study of price behavior.

If you enjoyed this article or have any questions/comments, please feel free to reach out to us!