This week JC Parets, host of the Technical Analysis Radio podcast, had on special guest John Roque. Mr. Roque has been in the industry since graduating from Fordham University with an MBA in 1990. His career began at Safian Investment Research where he was first introduced to charting stock prices by hand on paper. John worked at various sell-side firms including Lehman Brothers and was a top ranked analyst by Institutional Investor for 6 years. He eventually moved to the buy-side where he spent 4 years at Soros Fund Management. He most currently worked at KeySquare Capital Management as a Technical Strategist. This was a really entertaining podcast to listen to. JC and John discussed everything from baseball’s similarity to trading to current investment ideas.

John has always described technical analysis as “about the trend, not trading.” What does he mean by this? Humans will never be able to think and react as quickly as machines in regards to placing a trade but machines cannot decipher and understand trends. Investors also have issues when we are too active in the market. We need to understand ourselves and wait for the right pitch. Speaking of pitches, John, who played baseball in college, notes similarities between baseball and the stock market: “baseball is a long season with really no off-season, just like the stock market. You have to play steadily and remove emotion. You can go 4-for-4 batting one day and 0-for-3 the next day.”

In baseball, the 1st rule of hitting is to swing at strikes. This is appropriate for the markets as well. Investors should only buy price action that are strikes. Strikes can be uptrending assets, base breakouts, ATHs, etc. Things that aren’t strikes are downtrending assets, rallies into a 200 day moving average, relative weakness, etc. Not every hit will be a home run, some will be be singles or double plays. A great example of this is Tedd Williams. Ted Williams was one of the greatest hitters in baseball history. As investors, it’s important to observe how much better of a hitter Tedd was when he swung at good pitches. The chart below shows his career batting average based on the location of each pitch. 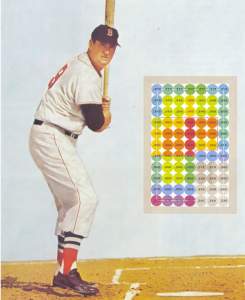 As a trader or investor, we never really know which one of our ideas will bring alpha. All we can do is define the risk/reward levels and let the market do the rest. JC ironically points out that his best trading ideas are usually the ones he gets the most slack for. He notes that if everyone is agreeing with him, he will feel less certain about a positive outcome to which John agrees. John used to develop his own sentiment indicator by asking 10 technical-focused industry colleagues whether they were bullish, bearish or neutral 15 assets weekly. These assets included the S&P500, Dow Transports, Gold, Interest Rates, Dollar/Yen, Euro/Dollar, and more. “There was always much dissension among the technical types. It was rare to have a consensus but when there was it was powerful insight to me.” John also just joined FinTwit in January. He likes the sense of community, the ability to learn from others, including people you have never met and the ability for sentiment feedback rapidly. You can follow John on Twitter here.

Moving onto current market ideas, John and JC discuss Gold, Interest Rates and Corn. John believes “Gold is improving very nicely lately without much fanfare and that is encouraging. I won’t extrapolate what it could mean for financial markets as a whole but I believe if Gold can get above $1,400/oz, it has chance for a new all-time-high in this cycle.” Technically speaking $1,400 in Gold has been resistance since September of 2013. Any rallies in Gold since then have stalled there. As of today’s close, Gold is only 7% away from $1,400. 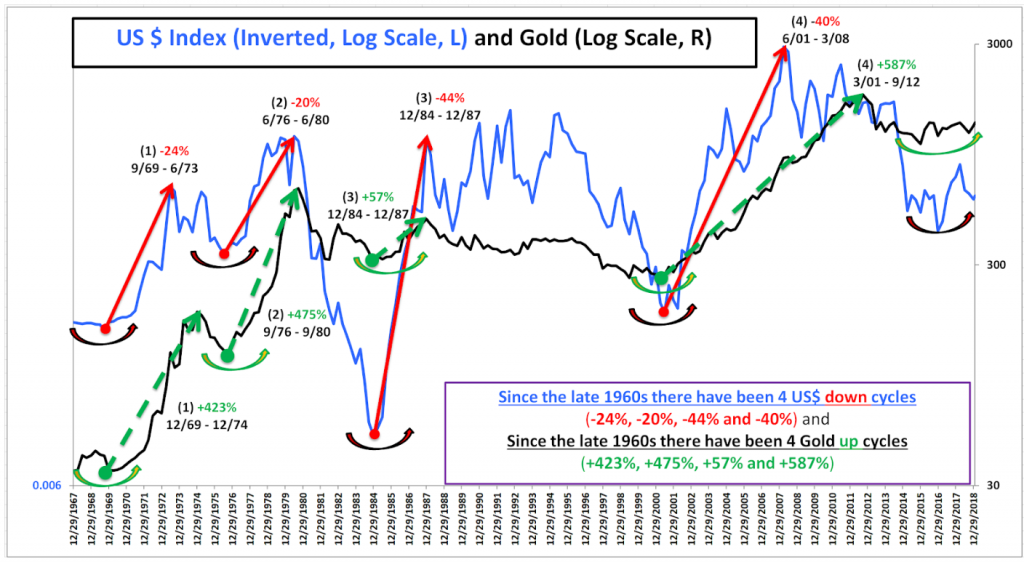 Regarding the direction of Interest Rates, John is not sure if the bear market is over just yet. He feels the case for growth in America is much better than Europe but he believes rates will have trouble going higher if European and Japanese rates stay low. “Historically, G7 rates trended in the same direction.” With that said, he doesn’t feel the 10-year yield can or needs to go all the way back to the low. Bottoms in Interest Rates can last 10 to 15 years. The odds are not in one’s favor to blindly short. “It’s a big mess. Most of the time rates have been down and I don’t know if it means were going to see a continued rise yet” he concludes. 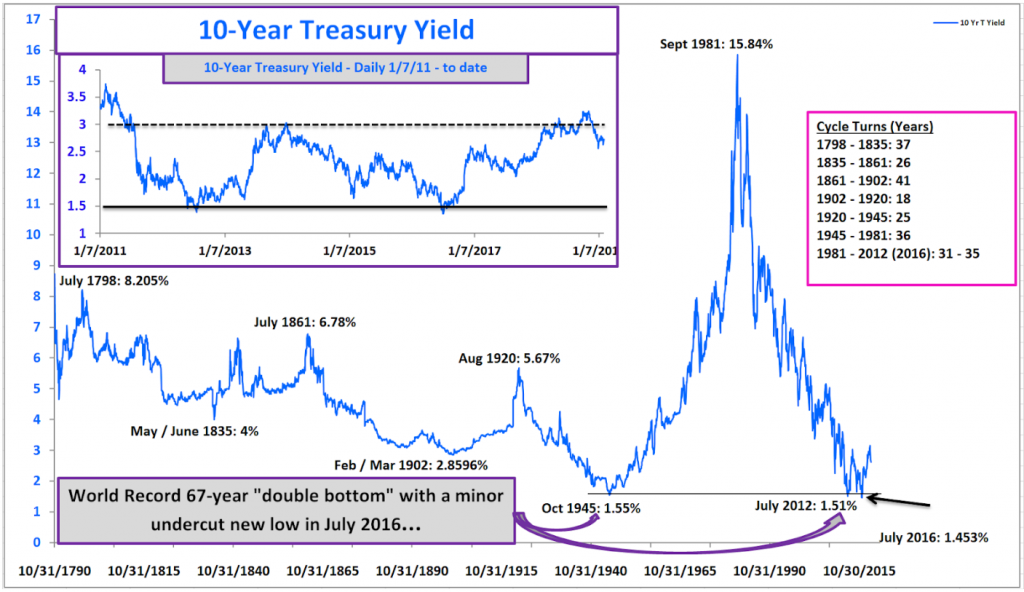 Corn is an asset that John feels is being ignored at the moment. He created a long-term study that analyzed the length of and price deterioration in corn bear-markets since the 1970s. The longest time period was 52 months, followed by 48 and 42 months. The most recent bear market that started in 2012 had a low in September 2016 was 49 months long. In regards to time, only one other occurrence has surpassed this.

This recent bear market that ended -64%. There have only been three -60% bear markets in Corn, with the worst performing -69%. It is quite possible that all the downside is finished but John notes “more work is needed and this could just be a consolidation before a breakdown but I want to be paying attention.” If investors look at the chart of Corn, it is clear that Corn bull markets can be very powerful. John is looking for price to get above 415, the spring 2018 highs. 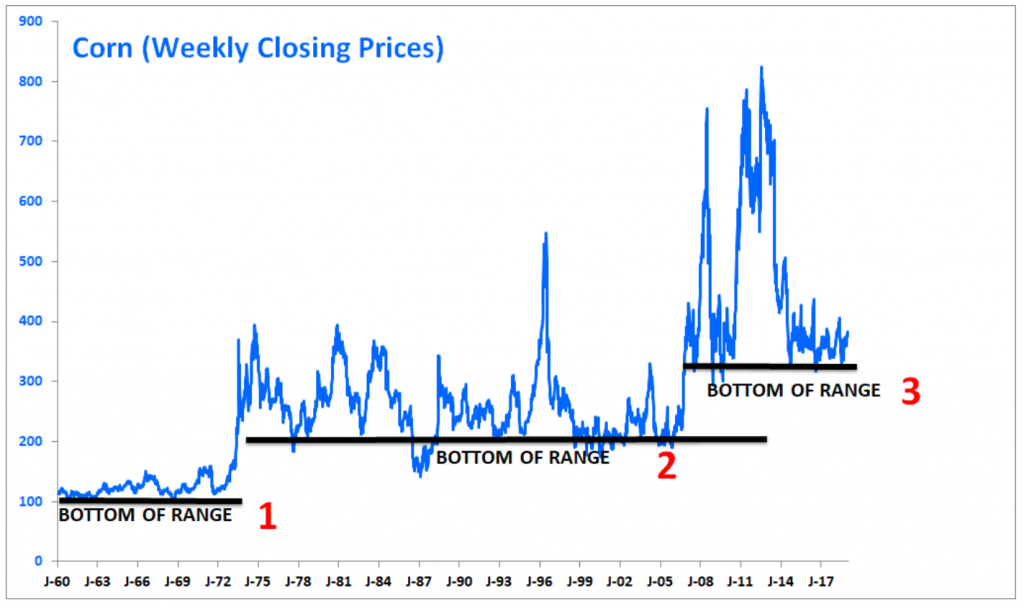 To listen to the entire episode, please click here.