There are several important seasonal indicators and trends to watch during the month of January that signal how the market might perform during the rest of the year.  Investors debate the efficacy of these indicators and the signals they give; however, most of the criticism stems from a misunderstanding of how they should be used.

One of these indicators is the “January Barometer,” which posits that as the S&P 500 goes in January, so goes the year. In other words, January’s performance predicts the direction of the market for the next eleven months. This phenomenon was first articulated in 1972 by Yale Hirsch. Today, the January Barometer is closely monitored by his son, Jeff Hirsch, author of the Stock Trader’s Almanac, an annual publication that follows various seasonal trends and cycles that appear in the stock market.

Jeff recently wrote a blog post titled Why January is still the most important month. The post dispels the myths about the January Barometer and discusses how it should be appropriately used by traders and investors. He begins by addressing the ten errors that the January Barometer has given in its 81-year history. He suggests there may have been extraordinary circumstances causing the indicator to fail (e.g., war, economic recession, unusual monetary policy, etc.).  Despite these errors, the indicator is still about 75% accurate. He also breaks down why this trend is more accurate in predicting the returns of the S&P 500 and less accurate in predicting the returns of the Dow and Nasdaq. Jeff also stresses the fact that no investor should base their entire investment decisions on the January Barometer alone — or any single indicator, for that matter. Rather, the January Barometer should be used to provide evidence and confirmation of your decisions.

The January Barometer isn’t the only thing investors are watching at the beginning of the year.  At the very end of 2018, Raymond James Chief Investment Strategist, Jeff Saut was interviewed on CNBC and told viewers to focus on what he calls the “December Low Indicator.” Saut explained that a bearish signal is generated when the market violates the December lows in the first quarter of the new year.  Saut gave last year as an example of this theory, and warned investors to “watch out” if prices fail to hold above the December 2018 lows early in the year. The Dow had a closing low of 21,792.20 in December 2018 and an intraday low of 21,712.53. Saut says the December Low Indicator was conveyed to him by a colleague years ago, but did not present historical data or discuss whether the Indicator has proven its accuracy over time. 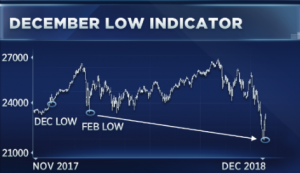 Saut advised CNBC viewers to “forget about the January Barometer” and instead watch the December Low Indicator.

Whether believers in or skeptics of both or either of these two indicators, perhaps the most prudent course in 2019 would be to keep both in mind as we proceed into the new year of trading.  Indeed, when used in conjunction, the two indicators could offer useful insights as to how the markets will perform throughout 2019.