“Many investment advisors and money managers have a little secret. They will proudly tell you that they rely heavily on fundamental analysis, carefully weighing earnings, market share, competitive environment and demographic trends to select the best stocks for their clients. What they do not tell you is that they check their stock charts before they make any moves.”

I came across this piece from Michael Khan the other day and I have to say, it’s probably one of the most sound write-ups I’ve seen on the application of Technical Analysis and, more importantly, why it’s an essential piece to any portfolio managers tool belt. While it gets a “bad rap” from many investors and traders, Michael says this is mainly due to the fact that people don’t really take the time to truly understand it. It’s not about moving averages and other invisible lines. Technical analysis, in reality, is about human behavior, the data that behavior gives us, and how we as market participants interpret these two things.

Michael gives us a great example of how repeated market behavior can be correctly interpreted so that we may have a better idea of deciphering what could happen next. It’s not a fool-proof way of investing (nothing is), but it gives us a point of risk to measure against:

“Let’s say that a stock price of $50 brought out the sellers on one or two occasions in the past. This price level is now called “resistance”…because it tends to resist price advances over time. Why? Likely because that level is considered expensive, and therefore when the stock gets near that price, investors step up their selling activities, increasing the supply of stock relative to the demand.”

One could make the case the two of the largest corrections we have seen in the current bull market (2011 and 2015) were clearly led by major levels of resistance:

If you are watching a certain stock and you notice it is coming into a price level that has seen large amounts of sales in previous environments, it’s prudent to take caution. If price can’t get through $10.00/share, how could it ever reach $10.01? Simple, but that’s the basic premise. On the other hand, if price can indeed push through $10/share, where it had previously been rejected, then the market’s view of the stock may have changed and we can expect price to continue rising this time around.

Technical Analysis really isn’t that complex. Michael goes on to explain that most investors can benefit from a few basic principles:

While the first point is pretty self-explanatory, I like to remind people of Newton’s 1st Law: things in motion tend to stay in motion. And until that changes, why fight it? It’s basic momentum. In fact, we put out a great piece on this concept a couple weeks ago. The second point, as we discussed above, is the simple practice of monitoring previous reactions (human behavior) at price points in order to determine what could happen next.

The third is the concept of relative strength, and is not as widely understood as the first two. Relative Strength analysis is simply a comparison of a stock or an index to its peer group. No matter what the direction of the overall trend of the broad market, we know there are always “leaders” and laggards”, stocks that are underperforming and stocks that are outperforming.

The Energy sector has been underperforming the S&P 500 in the current market by a significant margin: 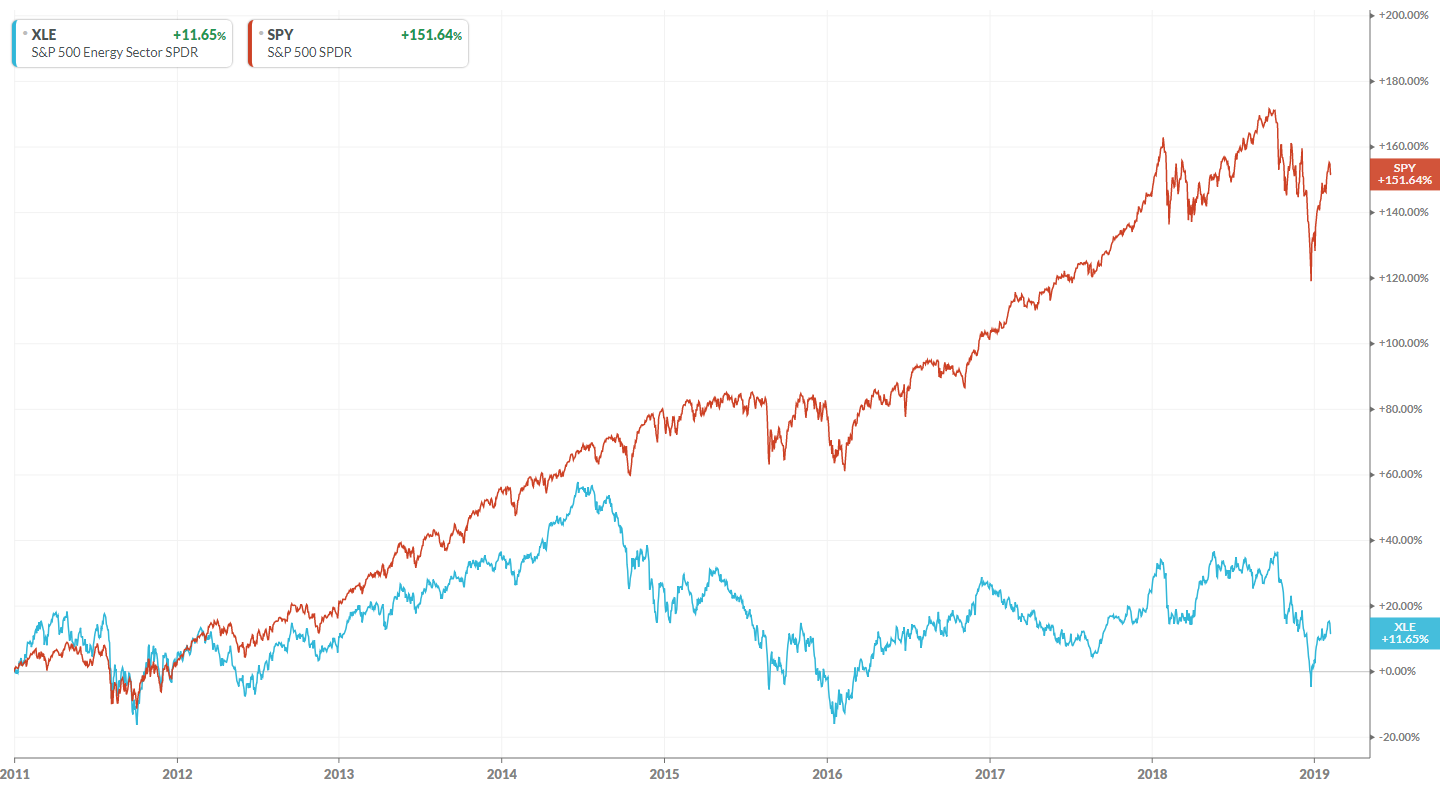 Over the past few years, have you caught yourself saying “Energy stocks just have to start outperforming eventually?” Many investors have these thoughts. I mean, it can’t just keep underperforming forever, can it? (Hint: Yes, it can.) Below is a chart of Energy against the S&P 500, which incorporates all three principles:

As we can see in the chart above, the clear trend of the relationship is down (bullet point #1). Further, there has been absolutely no sign of this long term trend ending, as price was never able to move above previous highs (bullet point #2). Each time Energy began to show signs of strength against the broad market, it eventually fizzled out. The relative performance (bullet point #3) of this sector against the S&P has not changed for years, and is currently giving us no signs of doing so in the immediate future.

Michael puts all of this together not to dispel fundamental analysis, but to show that the two approaches can be used together to give us a more robust view of what is really going in a particular stock or area of the market. For example, a fundamental investor may say a stock is “too expensive” based on the P/E ratio or some other form of valuation. However, if the chart is showing signs of continued strength, it’s hard to argue that we should sell the position. On the other hand, if a stock seems “cheap” based on these same factors, then the chart is most likely telling us that we should stay away until we get confirmation that the trend downward has indeed come to an end.