While the broad market gets bought, then sold…then bought…then sold, many investors and traders are having trouble finding areas to hideout. Meanwhile, contributors at The Chart Report have been prudent in pointing out a few areas to accomplish this, namely Utilities and Restaurants. However, there’s another interesting subset of the market that we want to bring to your attention: Insurance stocks.

From a relative strength perspective, both major Insurance ETFs, $IAK and $KIE, have been showing resilience in recent weeks. $IAK broke a nearly two-year downtrend versus the S&P 500 at the end of April:

And the relationship between $KIE and $SPY is almost identical…

On top of this, if you’re a fan of RRGs (Relative Rotation Graphs), these two ETFs actually began showing the potential for outperformance back at the beginning of April. We are now seeing that play out in regards to true alpha creation, as you can see in the video below, which begins on April 4th:

So, as we can see, the weight of the evidence has been in place for some time as far as Insurance stocks and their potential to outperform the broad market.

When it comes to actual performance, going back to the beginning of April, a time period mentioned above, the S&P 500 is essentially flat, up 26 basis points. However, $IAK and $KIE have returned 6.90% and 5.95%, respectively:

So, where has this been evident in individual stocks? Keep in mind, there are many different areas of the Insurance industry…

..and they’ve all shown strength as of late.

If you’re someone who looks for stocks making new highs (after all, new highs typically beget more new highs), Insurance has been a common theme for a couple of weeks now.

In the first week of May, Alleghany ($Y), which is a Property & Casualty name, broke to new highs, emerging from a large, two-year base:

American International Group ($AIG), a larger, more diversified Insurance company, also broke out of a short-term base in early April and has been moving upwards ever since:

Aflac ($AFL), a company that specializes in Accident & Health Insurance, is yet another name that has been very strong lately:

Chubb ($CB), also a Property and Casualty name, has been breaking higher from a one-year base:

When it comes to Insurance Brokers, Marsh & McLennan ($MMC), has been in a healthy uptrend for nearly two months and is up 22% YTD:

Even Small-cap names have seen strong uptrends. For example, Goosehead ($GSHD) is up nearly 30% after emerging from a wedge pattern three weeks ago:

If you’re looking for exposure to the Financial Sector, Insurance accounts for roughly a fifth of the $XLF ETF, inline with Capital Markets, both of which are about half the weighting of the Banking ($KBE) industry: 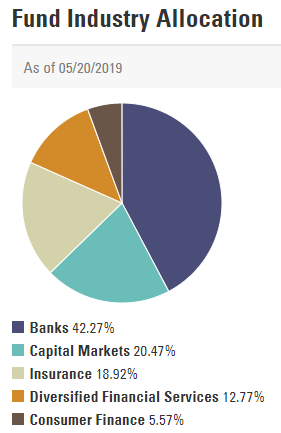 While it’s not a sexy aspect of the market, compared to Software, Biotech, or Retail, the Insurance space has been a very healthy place to seek cover in this choppy market. After underperforming the broad markets for over two years, I believe there is still a lot left in the tank for these types of stocks, even with the strong moves we have seen lately. Insurance names are also unlikely to feel much heat from the “trade wars”, as you will see with many Technology and Consumer Discretionary names. In fact, two other areas that are likely to avoid blowbacks from tariffs are, you guessed it, Utilities and Restaurants. In a period where trading seems to be more about capital protection versus out-sized returns, these defensive types of stocks have garnered a lot of attention as of late and that very likely could continue over the coming days and weeks.