On Monday, Instinet’s Frank Cappelleri posed the following question in his morning note:

“So, what are the true leaders?  The areas that are UP the most from the lows?  Or the ones that are the first to make NEW HIGHS?”

I thought this was a great point as we have a dichotomy in the market right now whereas many areas that have led off the lows are still below major highs while most of the areas hitting new highs have not been top performers off the lows. Frank used the example of Invesco High Beta and Low Volatility ETFs, $SPHB and $SPLV to express this point. He explained that despite High Beta rallying 27% off the lows vs only 18% for Low Volatility, the Low Vol ETF looks better technically – recently registering fresh all-time highs while high beta is still trapped below major resistance levels marked by last year’s price peaks.

See Frank’s charts below… which would you rather own?

When I asked Frank about his question and which are the true leaders right now, he explained that “you want both characteristics, and the only one that really fits both criteria is Software, $IGV.” He said he’s “intrigued by how many names in that ETF are blasting higher – and a lot of them are not mainstream.”

We have covered the strength in this industry in several articles recently, one by Nick Marino which you can read here. Some lesser known software names that are currently showing strength and have registered new all-time highs in the past few days are $RPD, $FICO, $EVBG, $NOW, $ENV and $ACIW. But it’s not just a couple of obscure stocks on the new highs list – it’s the whole group. Even the mega caps are participating as the ETF’s two largest names, $MSFT and $ORCL also printed new record highs Monday.

This transitions well into this week’s Momentum Monday, a weekly video featuring Howard Lindzon and Ivaylo Ivanov, of MarketWisdom.com where the two highlight charts of some of the hottest names in the market. Looking at the momentum 50 list from MarketWisdom.com, you’ll notice Software stands out, with 5 of the top 6 names coming from the industry.

This is how top-down analysis works – You identify the strongest areas in the market, then drill down to the individual names driving those gains and use them to execute your thesis. Can you think of another industry that led off the lows and is also at all-time high’s?

“Not a Lot of Famous Names In Here, But This Index Is Leading”

Howard pointed out that “Semiconductors are leading which is just good.” He and Ivanov stressed the significance of this index as chip-makers are one of the key engines driving the modern-day economy due to their involvement in a diversity of cutting-edge industries. Howard referred to the action in Semi’s as the “biggest tell right now, this index. Yet nobody’s following them.” In an article written by Ian McMillan last week, he echoed this theme when quoting Chaikin Analytics, Dan Russo who also called the relative strength in semiconductors a “bullish tell.”

“This is a beautiful breakout, they’re just building a new base,” Ivanov commented on his chart of $SMH below.

$SMH is a cap-weighted semiconductor ETF and while it may not be at new highs just yet, its equal-weight counterpart $XSD already is. We can go ahead and add this to the list of true leaders with Software, as they have also been one of the strongest groups off the lows. $XSD is up 33.5% since December 24th, less than 1% behind equal-weight software ETF $XSW. 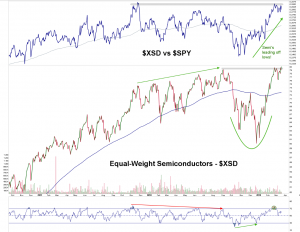 As you can see in the chart above, $XSD just closed at fresh all-time highs and their recent leadership is evidenced in the ratio chart in the top pane, which is also pressing on new highs. The strength in the equal-weight ETF shows strong internals in the space and is a positive sign for $SMH, which is still about 5% off its all-time highs made last year.

Said best by Ivanov, “it doesn’t make sense to be bearish when we see so much strength in the tech sector in general.”

I’ll be keeping a close eye on the recent strength in tech, specifically on software and semiconductors. This is a bullish development as the market tends to follow the leaders and both were some of the strongest groups during the bull market over the last few years.