Earlier this week, both Greg Schnell and Andrew Thrasher gave us their insight on past yield curve inversions, what occurred in equities markets following said inversions, and how we might be able to use this info to navigate the current environment. Both technicians take a look at the relationship between 3-month Treasury yields and 10-year Treasury yields. However, while Andrew looks at the direct dates of the inversions themselves, Greg takes a slightly different approach and focuses on the points in time when 10-year Treasury yields actually made 52-week lows.

Starting in 1965 and 1969, Andrew points out that there wasn’t much left in the upside to stocks in either instance. In the initial event, the S&P 500 eked out an additional 0.5% before eventually seeing a 20% decline. Four years later, the market actually peaked before the inversion, and saw a drawdown of 33.5% over the next year. 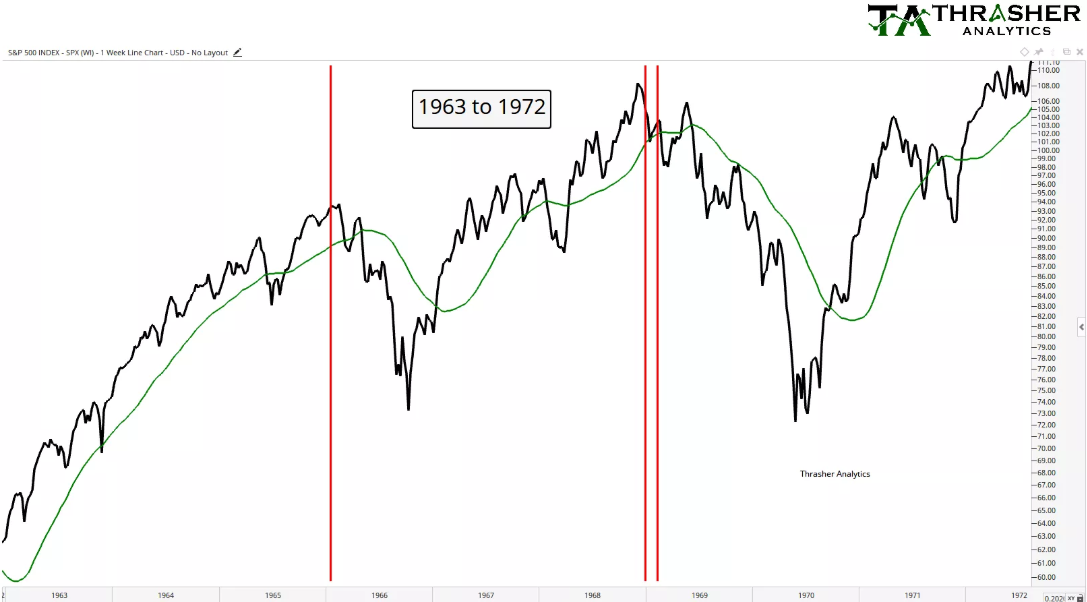 The next inversion covered by Andrew is 1979, after which the S&P rallied 9% before rolling over. The market eventually made new highs over the following months. This lead to subsequent inversions in 1980 and 1981. It wasn’t until then that we saw a substantial, multi-year correction in the broad market. 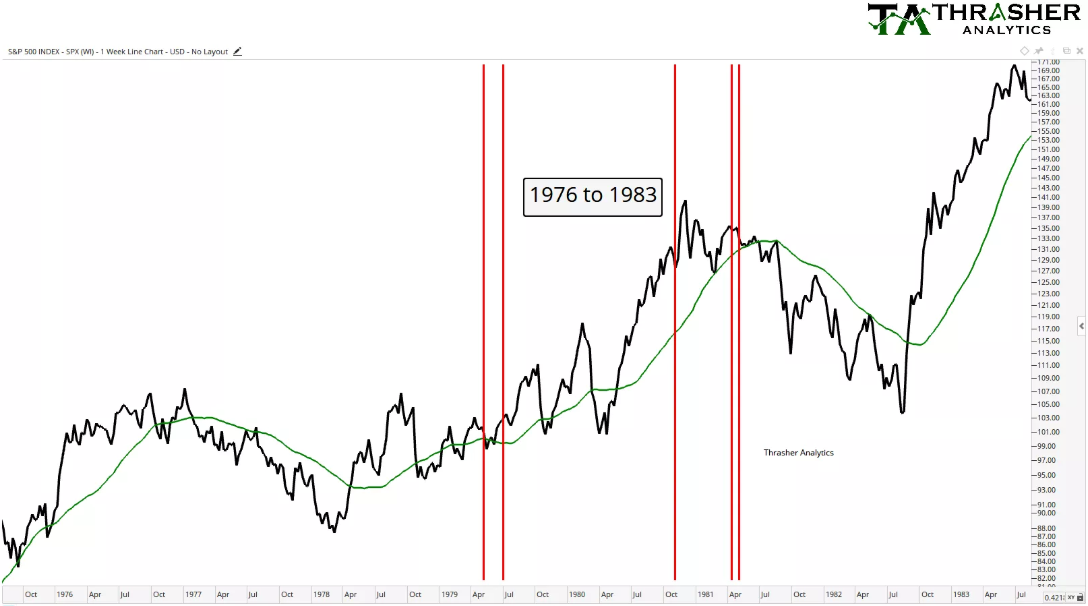 It wasn’t until 2000 that we saw another inversion between these two yields, following one of the longest bull markets in history. Greg points out that we saw an inversion in July of that year. Actual highs on the S&P 500 were made four months prior to this in March 2000, but a final push in price was made into August. The 10-year Treasury yield began to breakdown at a very similar time. 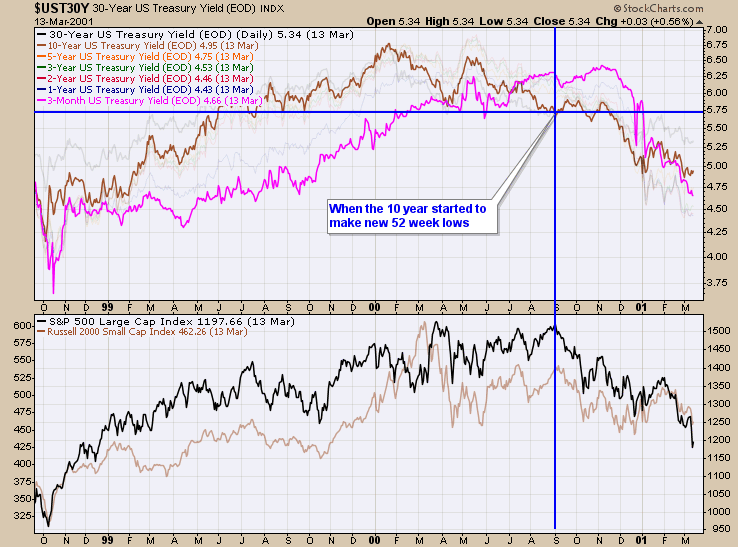 Prior to the “Great Financial Crisis”, we actually saw two inversions: one in 2006 and one in 2007. While both of these occurred before the final top in October 2007, 10-year Treasury yields actually started to break down less than a month after this. These new lows coincided with one last attempt by equities to move higher. 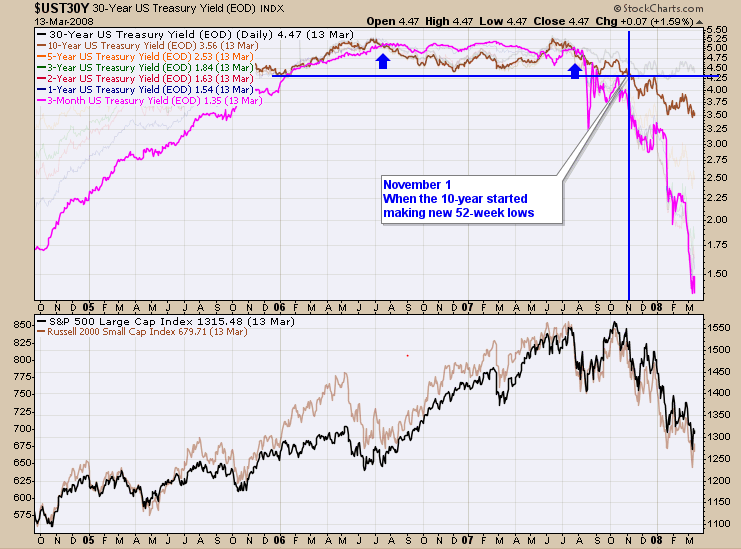 So, where do we currently stand? The 10-year Treasury yield made new lows last Wednesday, a day before the market made its best attempt yet to hold the 2820 level on the S&P 500. On Friday, we saw the “official” inversion of these two yields. We have since failed to stay above 2820 and currently sit at 2805. While price is still hovering around this area, there has once again not yet been enough conviction by participants to make a push higher and move back towards the all-time highs we saw in 2018. Of course, that could change over the coming days/weeks. 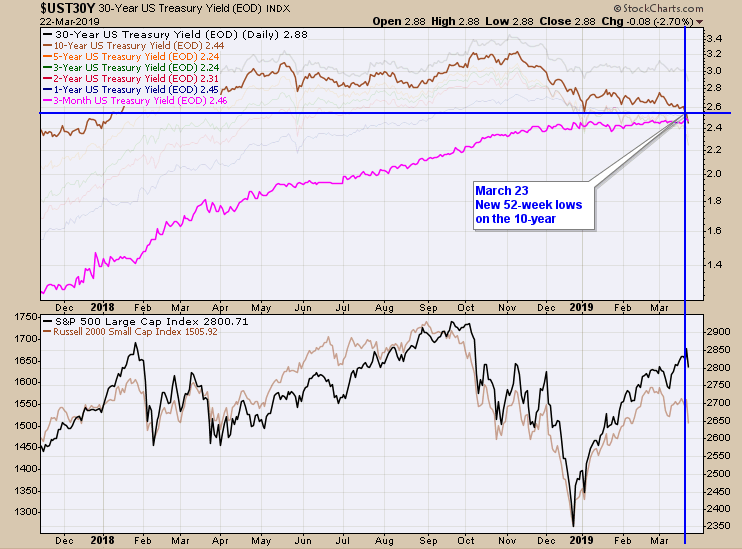 What is Andrew’s takeaway from these inversions? “It seems that when price has been below the multi-year high, it continues to squeeze a few more percent out of the up trend before a major down trend ensued.”

Greg, on the other hand, feels that this could be “it”: “It looks like a top and it feels like a top. The settings are all the same. Not just any top. Topping that marked significant drawdowns over the next few years and the two previous examples wiped out 50% of the account values each time.”

It is important to remember that these two are referring to slightly different events. Again, Andrew’s study looks at the inversions themselves, while Greg’s charts cover 10-year Treasury yields making new lows. Yet, both have occurred within the last week. Each technician admits that the sample sizes aren’t grand, but with rare occurrences in each, this is all we really have to go on. The inversion viewpoint says we could see more highs (311 days, on average, before the next recession), while the view of new lows on the 10-year Treasury yields say that the previous all-time highs in 2018 very well could be the final highs we see for this cycle.