Often never the ‘sexy’ group of the bunch and quickly lost in the shuffle to the likes of high flying tech or the latest IPO market, especially when risk is fully in favor. However, the Financial sector should be atop your list of barometer checks for the broad market, and when rotation is in favor of Financials, they likely deserve an overweight. So, we want to ask the question, what is this barometer telling us right now and should we seriously consider pockets of exposure in this group?

The first chart that will help us ‘ballpark’ the question above comes from Mark Newton, CMT (@MarkNewtonCMT) of Newton Advisors. It’s pretty straight forward and relative strength breakouts should not be taken lightly. When we see a downtrend like this broken in Financials vs. the S&P 500, we want to be taking action and the push higher relatively is likely telling us something is brewing here.

#FINANCIALS breakout – This has ALSO not been talked about, but the relative strength in FINS of late has resulted in a breakout of the Entire downtrend since early last year in $XLF to $SPX on Relative Ratio charts @CNB… https://t.co/QKc2c6R3LD pic.twitter.com/9QLNrT1cK6

To follow the relative strength theme, we look to Julius de Kempenaer (@jdkempanaer) contributor at stockcharts.com and creator of the RRG. He recently posted an ‘RRG Charts’ article displaying the rotation seen in Financials and how they have held up fairly well. You can read the rest of that article here. He does note that even though relative strength has been starting to show over the past couple of weeks, there are hurdles up ahead in terms of price resistance for $XLF.

As a sneak preview here is an updated RRG graph of $XLF as well as other common financially themed ETF’s.

When we look to the actual chart of $XLF, @TrendSpider gives a great perspective of their raindrop charting. The last couple of days shows a falling wedge breakout with a target of the 23.6% retracement level.

This sector of the market is even catching the eyes of those over at Chaikin Analytics. Dan Russo (@DanRusso_CMT) recently mentioned in his morning ‘Stock Market Today’ video that Financials are starting to show relative strength to finally match the fundamental backdrop within the sector.

“I think it’s time to go looking within the financials for ideas. Now we have been highlighting Insurance, pounding the table on Insurance. It’s time, to I think, start to broaden out that universe of Financial stocks. Start looking to the bullish and very bullish power gauge rated stocks that have held up as the market has come under pressure through the month of May. Those are names to consider on the long side of your portfolio.” – Dan Russo, CMT

You can find the full video in the link below, posted by our very own @sstrazza.

Great stuff as always from @DanRusso_CMT in today's morning note:
"It's time to get a little more selective in REIT land" $RWR$XLF "produced an overbought condition for the 1st time in a year… I think it's time to go looking for ideas within Financials"https://t.co/AoPOmDmx25

How about a breadth perspective to confirm some of the above thinking? 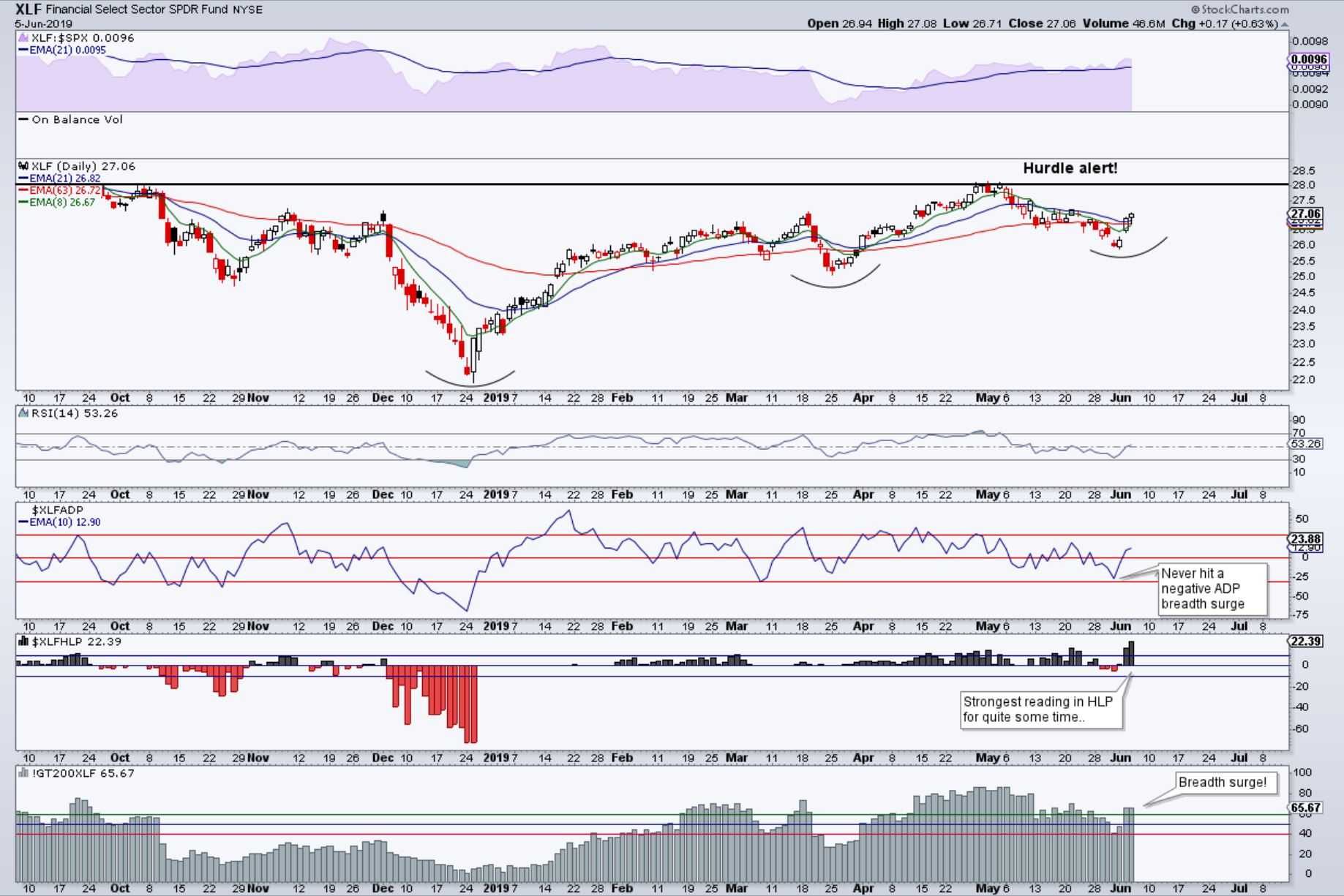 Specific to $XLF, we are seeing components of breadth hold up on the latest corrective phase. The last two days have offered more positive ‘surge’ type environments to not only confirm the recent move, but pave the way for a broadening situation within the sector. Will this correlate over to continue its’ relative strength vs. $SPY? Time will tell, but this breadth perspective certainly helps the case.

Maybe the flavor of the next few weeks to months can be the Financial arena, and to some degree already has been the flavor in a few pockets. Our very own at The Chart Report, @the_chart_life had similar views back in April which you can observe here, and we even have been hitting on the Insurance theme as well which can be seen here. The above evidence shown, strongly makes the case that we as market participants should be, at a minimum, getting out there and hunting for Financial names that have held up the best in this recent decline. If relative strength is giving clues, this should give you the nudge to dig a little deeper. Again, if anything else, use this sector as another key market barometer. When trends like $JPM, $CME or even Insurance companies hold up well, this should tell you something.

If you found this write-up interesting and started to chart some of your own Financial stocks or ETF’s. Reply in the comment section below and let us know your thoughts!