Oppenheimer’s Ari Wald appeared on CNBC’s Fast Money last night to discuss the market’s strong internals and what they might mean for some of your favorite “FANG” stocks.

I replicated Ari’s chart below using the percent of stocks above the 50-day moving-average which is roughly equivalent to 10-weeks. 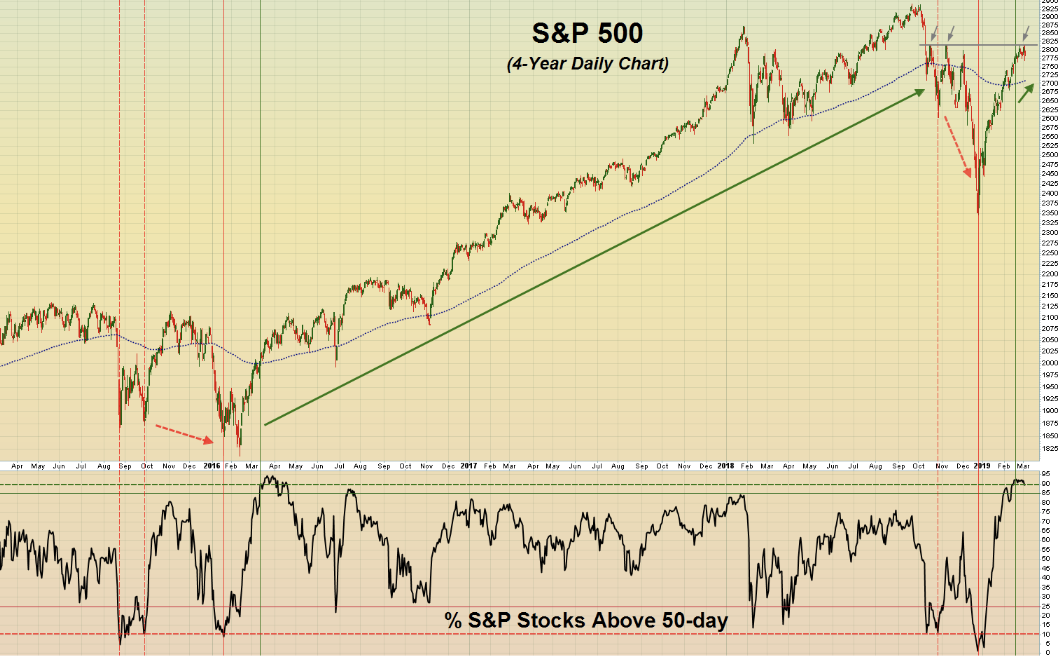 Ari supported his bullish breadth thesis with a bar chart of forward 6-month returns following various readings in the percent of stocks above the 10-week (or 50-day) moving-average. What he found was that the best returns come after either extreme oversold or extreme overbought readings. Using data from 1967, the average 6-mo return following readings below 20% is 6% along with an 8% return following readings over 85%.

According to Wald, “returns are even stronger six months out when you’re buying very strong overbought readings.” After taking a look at the indicator myself I found the strongest and most reliable signals actually come after an extreme overbought spike which follows an extreme oversold reading, similar to what we saw in Q1 of 2016.

I used more extreme levels of 10% and 90% in my analysis and found that an oversold reading is usually bullish when followed by an overbought reading within the subsequent three months. As seen in the 17-year chart below, the indicator printed these back-to-back extreme readings to mark the bottom in 2003, 2009, 2010, 2011 and 2016. It just flashed similar extreme readings this December and February. 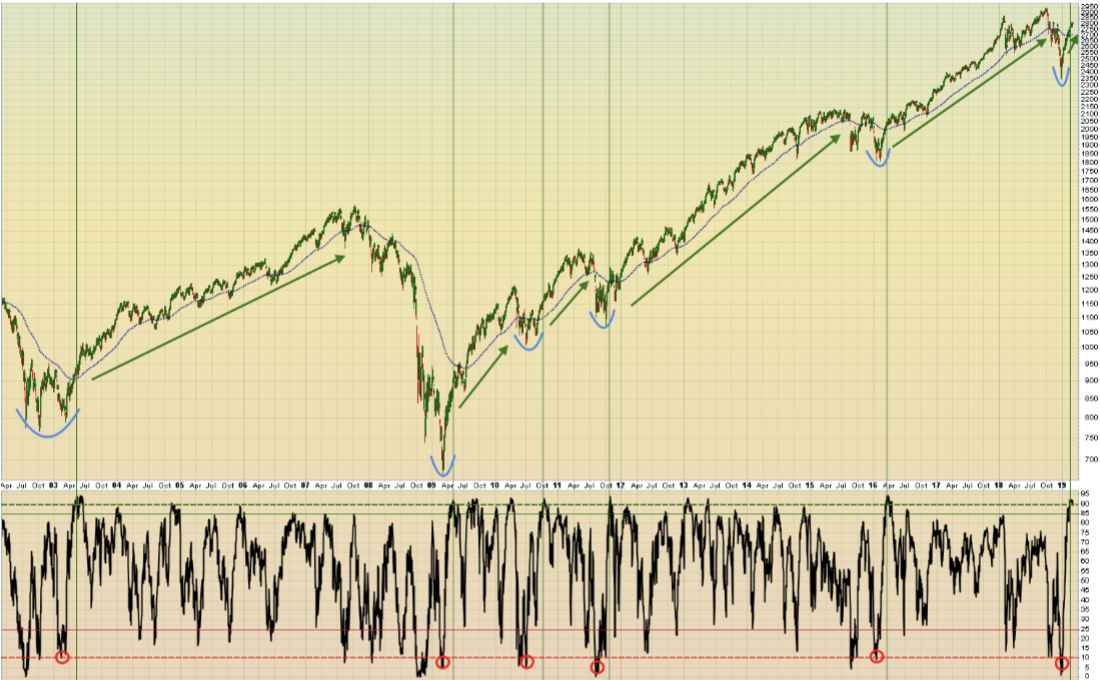 Ari also pointed out that the market is banging right into key resistance at the 2815 level which corresponds with the price peaks from October and November of last year. I’ve denoted this level with gray arrows in the first chart.

As for the FANG stocks, Ari made the point that Apple and Amazon have not shown leadership in the rally off Christmas Eve’s low, as both have performed slightly better than the S&P (as shown in the performance chart below). 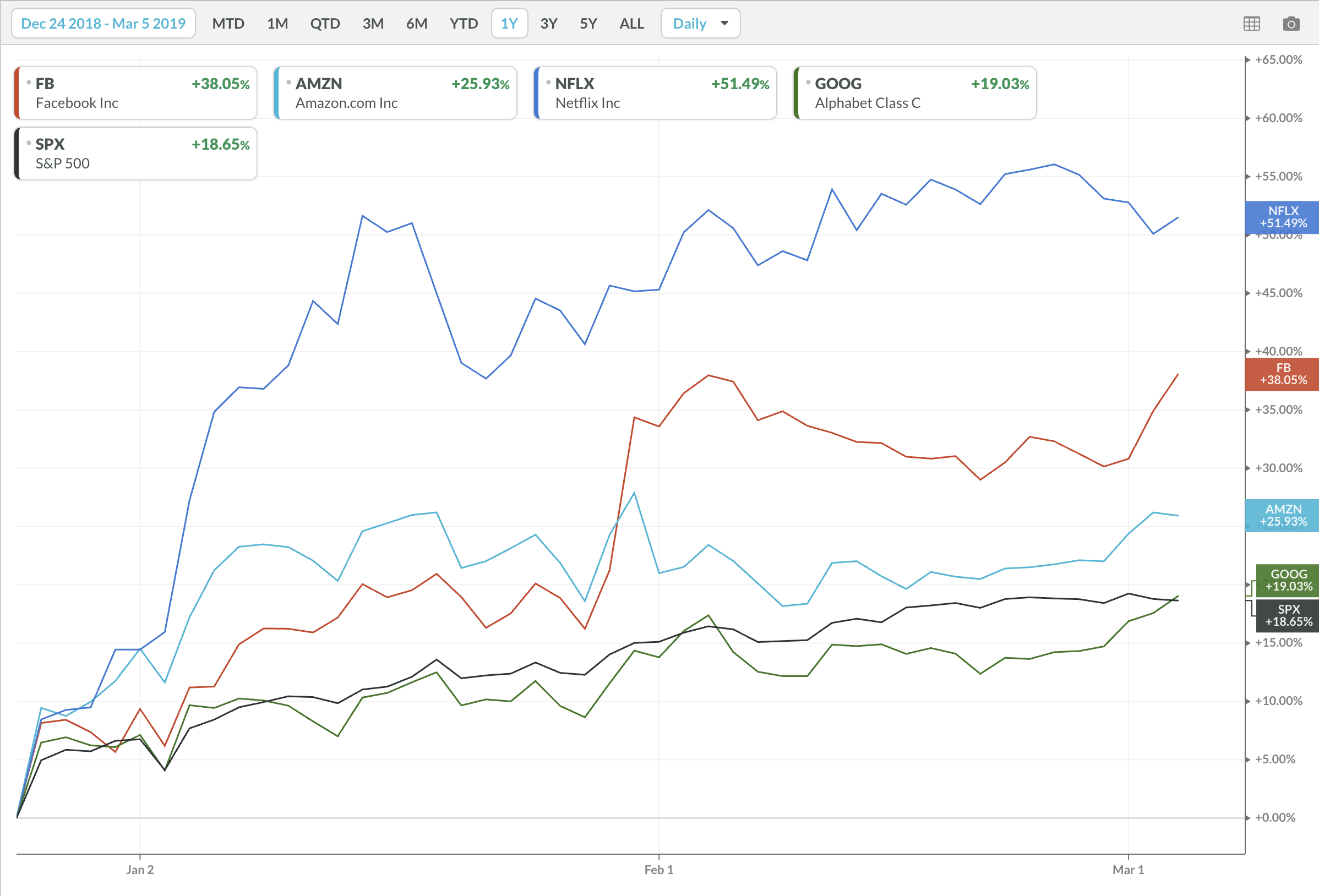 Amazon: “After that big run, finally a tactical play again…”

He likes Amazon from the long side “as long as you’re above $1,600.” Wald explained it has recently moved above its 100-day moving-average but is not in the clear until it resolves higher from its current base around $1,770. I think it is also worth noting that in the past few trading days price has moved above this key $1,600 level with both the 50 and 200-day exponential moving averages sloping higher and printing a golden cross.

Netflix: “Has reversed its downtrend, made higher highs…”

Despite being a “bit more extended off its 100-day moving average,” Ari believes Netflix looks healthier than Amazon and the rest of the FANG components. This should come as no surprise as Netflix has rallied over 50% off its lows, about double the performance of Amazon over the same period. He suggests letting NFLX cool off a bit before taking action, saying it “becomes attractive as you start getting down to $325” which is about 8% below today’s closing price of $354.

As for the remaining FANG stocks, Ari thinks Google could breakout above $1,150 which would provide “a clear shot to $1,300.” Facebook on the other hand, “needs more work to be done… I think it is in the process of basing,” says Ari.

Overall, Ari thinks the FANG trade is still a good place to be: “We like it for the long term, we think these high growth companies do indeed lead the market higher in this slow growth world… It’s FANG, it’s the entire market.”

To play devil’s advocate I would just say that I am seeing plenty of technology stocks on the new 52-week high list lately, none of which are FANG stocks… so I agree, it IS “the entire market,” and right now the strength is no longer coming from the largest names. The Nasdaq equal-weight ETF has outperformed the Nasdaq cap-weighted QQQ by as much as 6% off the December lows.