The S&P 500 has staged an impressive 16% rally off the December 2018 lows. The index is currently testing a flat 200-day moving average. This is one of the most widely watched technical indicators so naturally, there has been a lot of chatter about it lately. Some fear that it will act as resistance and force us to re-test the December lows, while others argue that its significance is overstated.

One technician who thinks the 200-day moving average will halt this rally is David Keller. He is the founder of Sierra Alpha Research and former managing director at Fidelity Investments. He wrote a post on Seeitmarket.com this week, where he answered some common questions about the 200-day moving average and explains why he thinks that it’s going to be a problem for the S&P 500 going forward.

He argues that one reason the indicator is so significant is that most charting platforms have the 50 and 200-day moving averages built in by default. For this reason, he describes it as a sort of self-fulfilling prophecy where the indicator acts as resistance simply because everybody is watching it and expects it to.

Other technicians disagree with Keller’s concern over the 200-day moving average. J.C. Parets, founder of All Star Charts is one of them. In the tweet below he argues that industry groups like Semiconductors serve as a better leading indicator than the 200-day moving average. He downplays its significance by calling it an “invisible line” and thinks that Semi’s are signaling that the market can move higher from here. 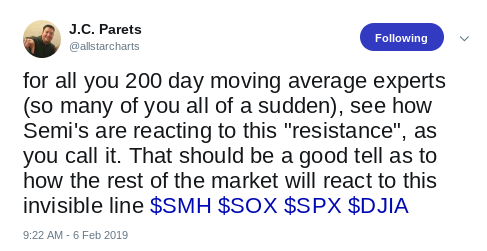 Josh Brown is another trusted chart-watcher and market commentator who has been urging people to ignore concerns over the 200-day moving average. He wrote a post on his blog this morning titled “I Will Build a Wall at the 200 Day Moving Average.” In the post, he acknowledges that the indicator is useful in identifying the trend and when comparing it to shorter-term moving averages. However, he warns that it’s a very noisy signal and he doesn’t think it will pose as significant resistance. Josh says this about the indicator:

“Talk of the S&P 500 bumping up against its 200-day moving average creates the impression that this overlay represents some sort of meaningful barrier or obstacle to the stock market. It does not. The 200-day moving average is neither wall, nor fence, nor physical barrier. It’s just an average price at which the index has closed over the last 200 sessions, roughly equal to ten months worth of activity.”