Well, it’s that time again. We knew this day would eventually arrive. We also knew that when it did arrive, there would be a plethora of reactions on both sides of the aisle. Today the Dow Jones Industrial Average ($DJIA) saw a “Golden Cross”, which occurs when the 50-day MA crosses above the 200-day MA, two closely-followed trend indicators. This comes exactly three months after we saw a “Death Cross” (when the 50-day MA crosses below the 200-day MA) on the same index on December 19th.

Since the inception of the Dow Jones Industrial Average in 1896, there have been a total of 81 Golden Cross events. This is the first occurrence since April of 2016. However, while we have seen a solid rally in stocks since then (the Dow is up 43.3% from that point), don’t let Recency Bias fool you. With a total of 81 data pieces, this seems like enough to take a statistical look at whether these events actually matter. So, here it is: 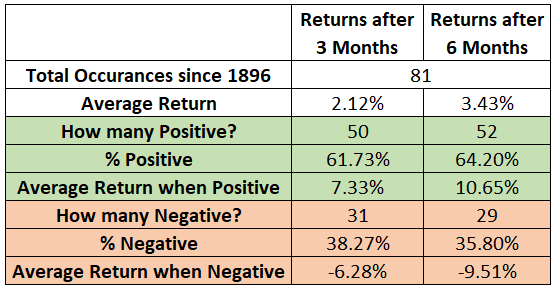 Looking at the statistics, at least over the following 3- and 6-month time frames, there doesn’t seem to be much conviction here that this is truly a bullish signal. With a 60-64% success rate of seeing a positive return, I’m not convinced investors should look at this as an “all clear” sign for stocks over the coming months.

Putting the data aside for now, how do investment professionals feel about the Golden Cross?

Jon Boorman, CMT had this to say on the topic: “They’re perfectly valid, but people treat them all as individual trades rather than being part of a system. If you’re going to take one trade, take them all. You can’t pick one and then when it doesn’t work say ‘so much for that’. It’s an absurd thing for short-term traders and business TV to take notice of. Just like any trend-following system, it will have plenty of whipsaw losing trades, but the winners will more than make up for those. It’s easy to pick holes in it, but very few have the discipline to execute it. Which is why it works.”

There are indeed a few periods where it’s a complete “whipsaw”, as Jon mentions. For example, between December 1999 and March 2002, we saw 5 Golden Crosses, and none of them produced a positive return over either time frame: 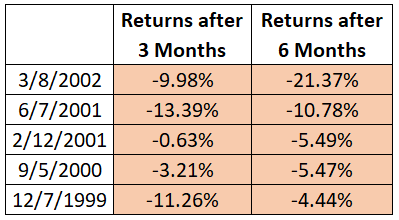 Ari Wald, Head of Technical Analysis at Oppenheimer & Co., seems to think the occurrence of a Golden Cross is a mixed signal as well: “All big rallies start with a golden cross, but not all golden crosses lead to a big rally.”

While the 30-month span mentioned above produced repeated “failures”, there have been periods in time when a Golden Cross has consistently worked. Between May 1958 and May 1968, we saw six straight events where there were indeed positive returns over the following 3- and 6-month periods: 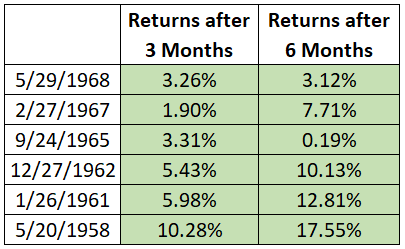 Brian Shannon, founder of AlphaTrends.net, says that it has been his “general observation that a golden cross or a death cross often comes after a big move” and that “They tend not to be timing signals, but more for confirmation of a move that has been in place.”

All in all, there doesn’t seem to be a substantial reason to put a lot of emphasis on these events. While the data may seem (slightly) bullish, it doesn’t scream that we should be buying stocks with both hands during today’s session. If there was a success rate of greater than, say, 80%, maybe we’d be having a different discussion. Maybe. Furthermore, some of the most respected technicians in our industry don’t really buy the hype either. It’s certainly a fun topic to talk about, but the validity of it being a reliably bullish signal doesn’t have a ton of merit.