Indices: US stocks were flat today, with the Dow Jones Industrial Average eking out a small gain of 15 points or 0.06%. The S&P 500 and Nasdaq both finished down but by only 0.08% and 0.07% respectively. The Russell outperformed today, closing up 0.46%.

Sectors: The Consumer Staples sector was the leader, with a gain of 0.59%, while the Technology sector lagged, falling 0.44%.

Currencies: The US Dollar Index was relatively unchanged today.

Interest Rates: The US 10-year Treasury yield continued to fall to where it currently sits at 2.405%. 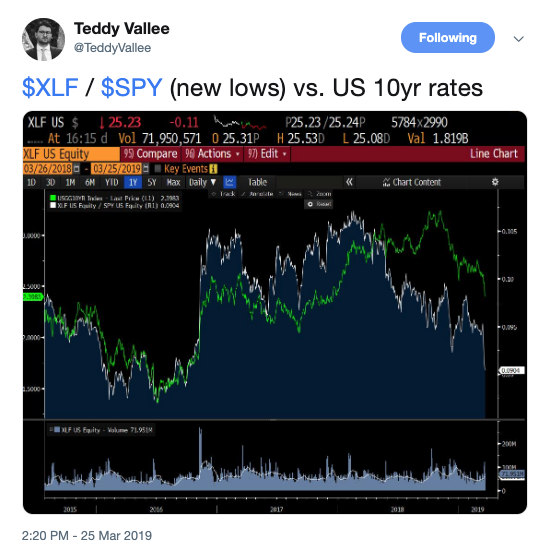 Today’s chart of the day was shared on Twitter by Teddy Vallee (@TeddyVallee). It’s a chart of the Financial sector’s performance relative to the overall market (S&P 500). The green line represents the US 10-year Treasury yield. You can see that both Financials and the 10-year yield are hitting new 52-week lows together. We like this chart because it emphasizes the effect lower interest rates have on the Financial sector. If yields continue to fall, it will likely force Financials lower, which in turn, would weigh down the overall market. Therefore, the US 10-year note is something to keep a close eye on right now.

“A bull market tends to bail you out of your mistakes. Conversely, bear markets make you PAY for your mistakes”

Price Momentum Oscillator Points to a Pullback – The Chart Report
In this report, where we feature Erin Swenlin of Stockcharts.com. She argues the market may be due for a pullback here and uses momentum indicators as evidence to support her thesis.

The Market’s Historical Reaction to Yield Curve Inversions – Andrew Thrasher
There’s been an obnoxious amount of chatter regarding the yield curve, as the short end of the curve inverted on Friday. Andrew Thrasher helps simplify the debate by showing how the market has reacted to this signal in the past.

Last Three or Four Days March Shaky Ground – Jeff Hirsch
Here’s a quick read from seasonality expert Jeff Hirsch. He points out that historically, the last few days of March have been weak for stocks. He thinks this is likely a result of end-of-quarter portfolio restructuring.

Momentum Monday…Let’s See How The Chaser React – Howard Lindzon
Howard Lindzon is back with some of his favorite momentum stocks in his weekly “Momentum Monday” video segment. Ivanhoff joins him to help breakdown the charts and trends they like.

Back in December $SPX tested the 200 DMA from below right in front of a "death cross" before cratering into the end of the year. Let's see if we get the same dynamic in reverse in front of a "golden cross." pic.twitter.com/d5uA6bmTrU

Over the past 30 years, such a dramatic $SPX reversal has only happened 1 other time: the 2009 bottom pic.twitter.com/crdF8ZTZE6

Since 1896, Q1 of Year 3 of the four-year Presidential cycle (so this quarter) shows that this quarter is the best for stocks.

Dow up 9% for the quarter with a few days to go.

The S&P 500 has now filled its March 13th gap and has come close to filling the March 12th gap. $SPX pic.twitter.com/ZGX6FxbHJh

The 4-day drop in the largest gov't bond (US, UK, German, Japanese) yields has been the biggest collective slide since Sep 26, 2016: pic.twitter.com/eCBKr4cLkC

And how long did it take for $SPX to tank?

About 2 and a half years. pic.twitter.com/TL7KRzDc4P