Indices: US stocks closed lower, with the Dow Jones Industrial Average slipping 32 points or 0.13%. The S&P 500 underperformed the rest of the major indices, falling 0.46%.

Sectors: Industrials were the only sector to close positive, with a gain of 0.11%. Healthcare was the laggard, falling 0.83%.

Currencies: The US Dollar Index gained 0.22%. 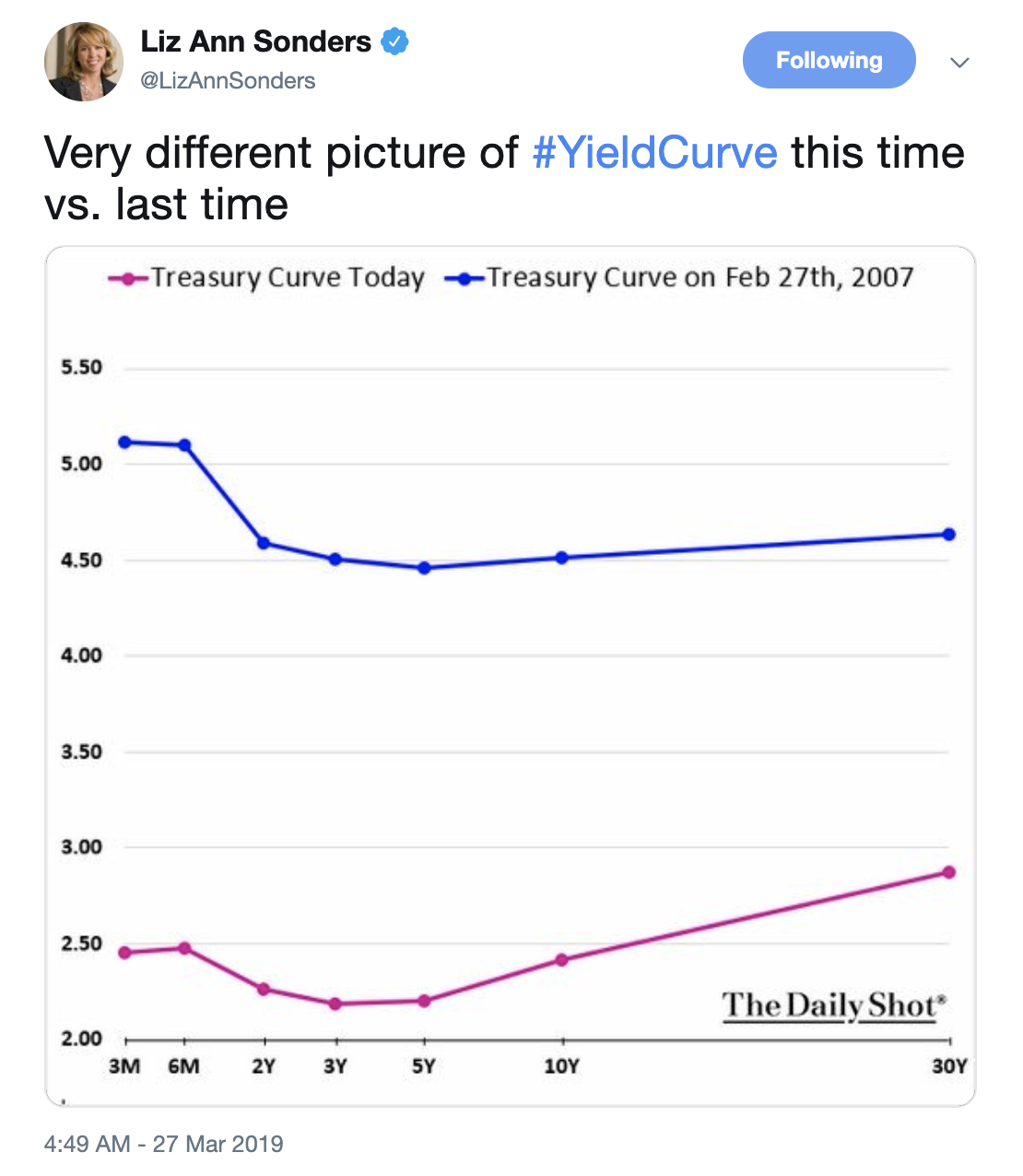 Today’s chart of the day was shared on Twitter by Liz Ann Sonders (@LizAnnSonders). There’s been an overwhelming amount of chatter about the yield curve ever since the front end inverted last Friday, but we think this chart offers a valuable perspective. It shows today’s US Treasury yield curve in pink, with the yield curve from the last time it inverted in 2007 in blue. The big difference between the two is that in 2007, the long end of the curve (30yr yields) was much lower than the front end. It’s also important to note that today’s yield curve isn’t even fully inverted yet. There are many out there citing the recent yield curve inversion as a reason to get bearish, but for now it might be best to keep an eye on the long end of the curve.

A Fibonacci Trading Strategy Explained – Steve Burns
This article is a great introduction to Fibonacci and how it’s used in technical analysis. The author covers everything from Fibonacci retracements to Fibonacci Fans.

Mystery Chart 2-27-19 – Tom Bruni – All Star Charts
Take a look at this week’s “Mystery Chart” from All Star Charts. Technician, Tom Bruni does this exercise weekly and emphasizes that the objective is not to simply guess the chart symbol but instead, ask yourself how you’d trade the chart (buy, sell, do nothing).

Is DJIA-Nasdaq Monthly Divergence Bearish or Bullish? – Jeff Hirsch
Here’s a short note from Jeff Hirsch that takes a look at the divergence that’s forming between the Dow Jones and the Nasdaq. He points out that as of yesterdays close, the Dow was down 1.00% in March while the Nasdaq is up 2.11%.

Top Technician Says These High Yielding Stocks are About to Breakout – CNBC
Chris Verrone of Strategas Research made an appearance on CNBC today. He discussed the carnage in Treasury yields and offers three high dividend yielding stocks that have attractive chart setups.

$SPY trying to stabilize on the WTD VWAP pic.twitter.com/k4m2xGJp87

An interesting chart from @DRBCurtis, looking at how implied volatility in Treasuries has been rising much faster than vol in stocks. Makes sense – the volatility in bonds has been driven by the Fed's sudden dovish shift, sending yields lower and giving support to equities. pic.twitter.com/yuFi3fXyMI

If this was a stock, it would be one ugly chart. pic.twitter.com/AvAgWFPAhE

Traders have moved into VIX call options and volatility ETFs. In the sense that extreme positions tend to lead to moves in their direction, this is the smart money. pic.twitter.com/JDDKvFknLw

There have been bearish momentum divergences in Palladium since October.

Prices rallied 500 points, or 45% higher from the first one.

Bearish divergences need price confirmation, but when you get it…look out. pic.twitter.com/SCxlYCaoiy