Indices: US stocks closed higher, with the Dow Jones Industrial Average closing up, 92 points or 0.36%. The Russell 2000 was the strongest of the major indices, gaining 0.85%.

Currencies: The US Dollar Index gained 0.45%.

Interest Rates: The US 10-year Treasury yields moved higher to 2.391%. 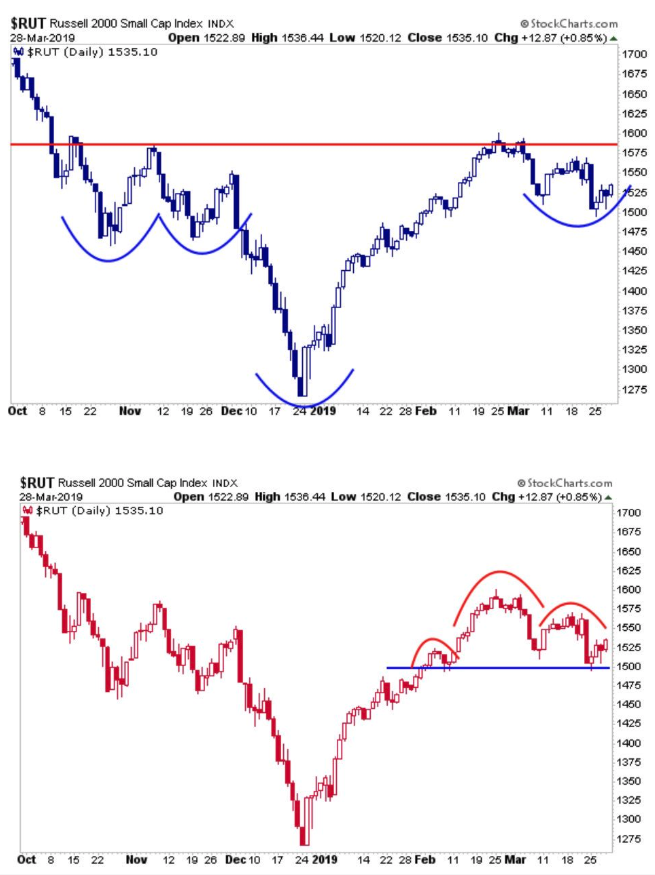 Today’s chart of the day was shared on Twitter by Frank Cappelleri of Instanet, (@FrankCappelleri). The two charts are the exact same security (Russell 2000 index) in the same exact time frame. In the tweet, he included the quote “Beauty is in the eye of the beholder” to emphasize the point that you can see the same chart as either bullish or bearish. We like this chart because it highlights the idea that technical analysis is more of an art than a science. Critics of technical analysis argue that chart patterns are subjective and open to interpretation. While this is true, chart patterns are just one tool technicians have. Technical analysis is about more than just chart patterns, it’s really about trend recognition and studying the behavior of market participants.

A Historical Look at Yield Curve Inversions and Equities – The Chart Report
In this article, we take a look at the impact of a yield curve inversion on stocks. We feature Greg Schnell and Andrew Thrasher who offer unique perspectives into the yield curve discussion.

Dividend-Paying Stocks Look Ready to Break Out, MKM’s O’Hara Say – Bloomberg
Technical analyst JC O’Hara joined host Abigail Doolittle on Bloomberg on Wednesday to discuss the recent volatility in the bond market and how it could impact high-dividend-paying stocks.

Who is Lying? Stocks, Crude Oil or Yields? – Chris Kimble
In this blog post, Chris Kimble explains how Crude Oil, Stocks, and Treasury yields have seen a high degree of correlation over the past year. However, that correlation seems to have broken down as the 10-year Treasury yield has begun to diverge from the others.

Taking a Look at Global Market Relationships – The Chart Report
This piece from The Chart Report takes a deep dive into Global Equity markets. We ask the question: “what if the real opportunity cost is not being long or short the S&P 500, but not understanding the current relationship between foreign markets?”

The percentage of stocks in the $SPX trading above their 200 DMAs remains above the interim highs from the fall. pic.twitter.com/IhopbUNT6B

So when did the bull really start?

Personally I side with it started 6 years ago today when it made new highs.

Either way, been an amazing ride. pic.twitter.com/X1V1nr83BL

That divergence b/w $SPX and $TNX continues.. but sooner or later one will catch up with the other.. and I still lean to SPX playing catch down. 😎 pic.twitter.com/gTFW1ZGG7t

Another bit of disappointing EU data. Euro-area economic confidence fell to the lowest since 2016. There's been a lot of discussion about the U.S. yield curve, but the German 2-10 spread has also been narrowing, now at the least since 2016. pic.twitter.com/52kd68sDwd

While #gold gets shellacked to the tune of -$21 the $GDX is still in a solid uptrend above a rising 50-day moving average. Bull market shakeout or the start of a much bigger decline? My bet is on the former, but only time will tell. pic.twitter.com/lor25hviPi

Here's how quickly (on a grand scale) things have changed on volatility markets in just the last decade or so.

$DATA has been trying to rollover at the 2015 high since Q4 but it's a software so… pic.twitter.com/vRFX2WnQzr

"If everyone is thinking alike, then somebody isn't thinking." George S. Patton pic.twitter.com/zcw683BWJs