Indices: US stocks began the new quarter, month, and week today on a positive note, with the Dow Jones Industrial Average closing up 329 points or 1.27%.

Stocks: The ride-sharing company Lyft ($LYFT) continued to sink on its second day as a publicly traded company. Shares fell 11.85% today to close at $69.01, below its $72 IPO price.

Sectors: Financials led with a gain of 2.45% while Utilities lagged falling 0.69%.

Currencies: The US Dollar Index was relatively flat, changing just 0.07%. 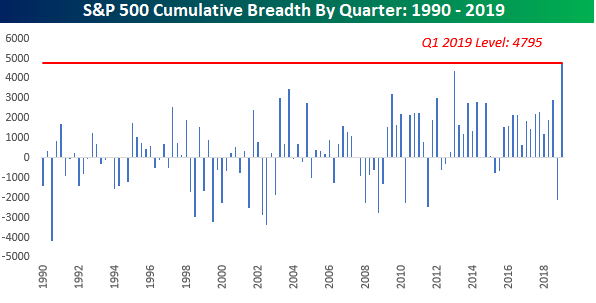 Today’s chart of the day was shared in a note from Bespoke this morning. It’s a histogram of the cumulative A/D readings for each quarter since 1990. The cumulative Advance/Decline or A/D Line is a breadth indicator that plots the difference between the number of advancing and declining stocks. Bespoke points out that this was the strongest quarter going back nearly 20 years! It would be concerning if the market was rallying and breadth was deteriorating, but it’s not. This bullish breadth reading helps to confirm that the primary trend is up.

“If you don’t follow the stock market, you are missing some amazing drama.”

Seeking Strength in Safe Haven Staples – The Chart Report
One key theme that we’ve been focusing on at The Chart Report is the relative outperformance from some of the more defensive sectors of the market. In this piece, we offer two stocks in these sectors that we think will benefit if this trend continues.

AT&T Makes a Break for It – Arthur Hill –  StockCharts.com
In this article, Arthur Hill explains why the chart of AT&T ($T) is poised to breakout here. He offers tells traders to keep an eye on the 50-day moving average and offers some specific levels of interest.

How Baseball Made Me a Better Investor – All Star Charts
In this quick video, J.C. Parets and Sean McLaughlin discuss some of the parallels between Baseball and investing.

Momentum Monday – America is Hungry – Howard Lindzon
Howard Lindzon is always looking for the hottest trends in markets. This week, in his weekly “Momentum Monday” video, he highlights the recent strength he’s noticing from large-cap restaurant stocks like McDonald’s, Chipotle and Starbucks.

The start-of-the-quarter charge for risk assets has earned a moderate wedge breakout for the Dow: pic.twitter.com/YXx9IPy9WQ

With such ecoparanoia before and surrounding yield inversion, good data has some very good implications for markets, namely lifting the $IYT and $IWM closer into line $SPY $QQQ after substantial underperformance in March. Both are now beating tech over past week: pic.twitter.com/CE8kBSh3zA

Golden Crosses 1927 to April 2019. 49 in total with an average 1 year return of 8.75%. Full stats at end of table. Golden Crosses are unusual in bear markets over the past few decades. Which one will make April Fools of us in a year? The Golden Cross or the Yield Curve? pic.twitter.com/BSjvlhVdJG

We haven’t seen anything like the current US Treasury v. Bund spread in the last thirty years. @TaviCosta via @SoberLook pic.twitter.com/jNEFsgKhX9

The copper to gold ratio moves to a new high in 2019, further erasing the threat of a recession in 2019.

Historically this ratio trending higher has pulled rates higher along with it.

Time for the 10-yr to move higher? pic.twitter.com/RWvRZISyd6

Back to the lows? $SLV pic.twitter.com/ebAE7YvqHn

Lyft breaks below its IPO price ($72), now down over 20% from its opening day high. $LYFT pic.twitter.com/VgAhoGO2NG