Indices: US stocks were a mixed bag on Monday, with the Dow Jones Industrial Average closing down 84 points or 0.32%. The S&P 500 and Nasdaq were able to end slightly positive, while the Russell 2000 finished down 0.22%. 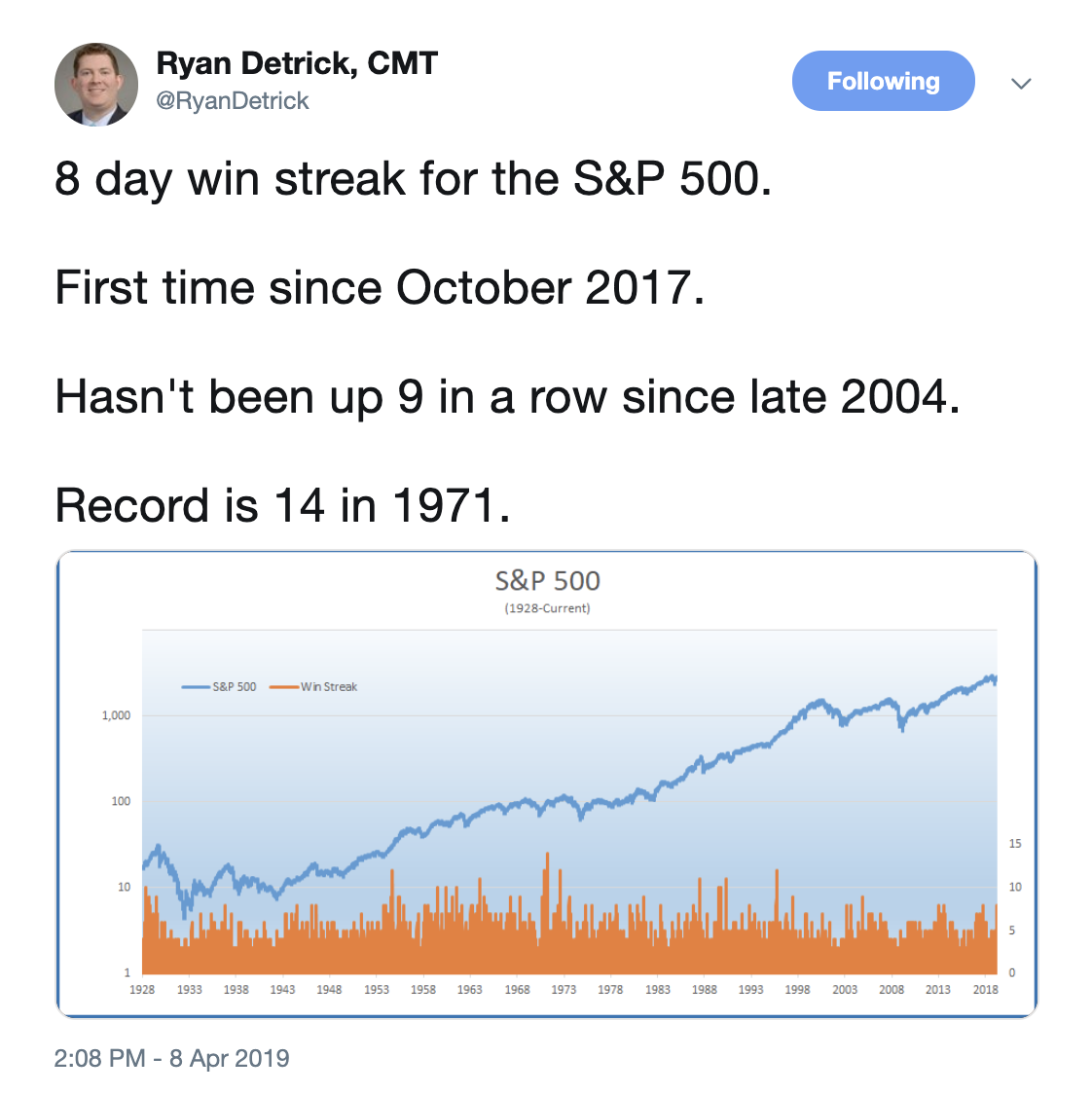 Today’s chart of the day was shared by Ryan Detrick on Twitter (@RyanDetrick). It’s a chart of the S&P 500 index going all the way back to 1928 with the winning streaks below in orange. Detrick highlights the eight-day winning streak that the S&P has been on. As he points out in his tweet, we haven’t seen a streak this long since October 2017. If the index finishes positive tomorrow it will mark the longest winning streak in over a decade!

Sentiment Snapshot: Melt Up Time? – Top Down Charts
In this quick read, Callum Thomas presents five charts that show a shift in sentiment among market participants. He expects a capitulation in pessimistic sentiment to propel the market higher in the coming months.

Is Earth Breaking Out? – JC Parets – All Star Charts
Here’s a piece from JC Parets pointing out that equity markets are rallying not just here in the US but also around the world.

How a Financial Advisor Uses Technical Analysis – The Reformed Broker
In this video, technician, Andrew Thrasher, and Josh Brown discuss how Financial Advisors can benefit from a technical perspective.

S&P 500 Daily Winning Streak Reaches 8: 53.8% Historical Odds for Reaching 9 – Jeff Hirsch
As we noted above in Today’s Chart of the Day, the S&P 500 index is on a hot winning streak. Seasonality expert Jeff Hirsch uses historical data to show that historically these long winning streaks indicate further gains in the months to follow.

Can This Market Go Higher Still – Dr. Brett Steenbarger
Behavioral/Trading psychologist, Dr. Brett Steenbarger gives his thoughts on where the stock market currently stands. He explains that he’s not seeing any signs of euphoria and that there seems to be broad participation from the individual components of the market.

Still watching closely to see if the number of stocks getting overbought across each major index can reach new highs with price or if the recent divergence remains intact.

Apologies. Here's the chart.
This #Bloomberg chart is a reminder of the extent to which the short #vol trade has returned, and in size…courtesy of the #CentralBanks' dovish pivot. #economy #markets #volatility #risk #investing #investment #investors #traders #trading @business pic.twitter.com/FB2lDDgwb7

Sector-level trends are improving, with our model based on price breadth and momentum at the sector level moving to its highest level since mid-2016. pic.twitter.com/1N54lOqUB4

#VIX COT – Large Specs now hold a bigger short VIX position than they did at the S&P’s ATHs in Sept. pic.twitter.com/GvJdyO81A8

$XBI Biotech stocks are breaking out from a bullish pennant. pic.twitter.com/JXcm0XQYQY

Are REITs going to retest those early 07 highs? $IYR pic.twitter.com/Snaggqll1U

Here's the levels I'm watching for $TLT if we see Treasury yields continue to advance. pic.twitter.com/oEFpaiz1pw

This is a good illustration of how U.S. domestic investors are buying Treasuries while foreigners step back. https://t.co/OiHjzO6oEU pic.twitter.com/xH96Wj14U4

we saw sellers at the VWAP from the IPO in $LYFT and now it is testing the VWAP from last week low, no evidence of buyers yet, but worth watching pic.twitter.com/BnH6fuEVue

Some magazine covers can be good contrary indicators. The Economist even admits it.