Frontier Markets ($FM) have been exhibiting considerable strength relative to other International Equity benchmarks since the S&P 500 topped on April 30th. FM has been the only positive area among Global Equities since the May selloff began, up 5.5% while the S&P ($SPY) and All-Country Ex-US Index ($ACWX) are down almost 2% and Emerging Markets ($EM) are lower by more than 4%.

The Frontier Markets Index is comprised of stocks from the riskiest and least economically developed countries in the world, with Vietnam, Kuwait and Argentina home to nearly 50% of its holdings. Because of this, FM is considered a Global Equity market risk gauge. When this group is outperforming, it’s evidence of healthy investor risk appetite and usually means we are in an environment where other equity markets are also moving higher. Simply put, Frontier Markets are to International Equities as Micro-caps are to US Equities. They are the junk of the junk, and the fact that they are breaking out can only be a positive for equities on a broader scale.

In this post I’ll walk through a handful of technical characteristics that I believe make the current setup in FM a favorable one for bulls.

FM has been consolidating in a tight range between $28-29 for the better part of this year. As noted above, it has been showing relative strength vs other equity markets over the trailing 5-weeks. While the S&P and All-Country World Index fell over 6% peak to trough in May, the max drawdown in FM was only about half that. As you can see in the ratio chart of Frontier Markets vs the S&P 500 below, FM recently broke its downtrend line from the 2018 highs and is now back above the 200-day as it looks poised to resolve higher from a double bottom formation.

During the recent selling pressure, FM put in a failed breakdown as prices briefly undercut the lower end of their YTD range before reversing upwards to their highest level in 10-months. There’s been an expansion in volume and momentum spiked back into a bullish range to confirm the breakout. Here is the daily chart, showing the recent breakout above a confluence of resistance at the $29 level. 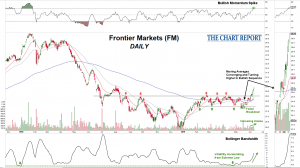 Also notice how the three major moving averages had been congested and moving sideways until just recently breaking higher in bullish sequence (20-day > 50-day > 200-day). These averages represent both short and long-term timeframes so seeing them all accelerate to the upside after a period of consolidation is a signal that often indicates the start of a new uptrend. The chart above includes the Bollinger Bandwidth indicator in the lower pane. When this reading is low it indicates suppressed volatility resulting in the kind of rangebound action we’ve seen for the better part of 2019; but when the line oscillates higher as it’s doing now it represents increasing volatility in the underlying security which is a characteristic that should accompany any new trending period.

Now let’s zoom out to the weekly chart and identify what makes this $29 level and current trading range so significant. First, after a quick move off the December lows in Q1, price digested its gains in a tight multi-month consolidation allowing the 200-day (40-week) moving average to flatten and begin to rise.

Not only is price currently above all its major moving averages but it’s also above its Volume-Weighted Average Price from both its all-time high and all-time low. Notice how the sideways range price had been consolidating in during 2019 was bounded on both sides by these AVWAPs. Lastly, $29 represents a major level of interest for buyers and sellers as it is the 38.2% fibonacci retracement of the 2014-2015 drawdown from FM’s all-time high to all-time low.

This setup has everything we look for in a trade… relative strength/outperformance, a strong breakout confirmed by momentum and volume, and a key level of support to define our risk against. With price making a sustained move above $29 in recent sessions, we want to be long FM especially on any weakness back towards this level. With a price target at 2018’s high ~$36, we can allow some room for a shakeout and define our risk at the 200-day which is currently ~$28.70. This still offers an assymetrical reward/risk opportunity greater than 5x.