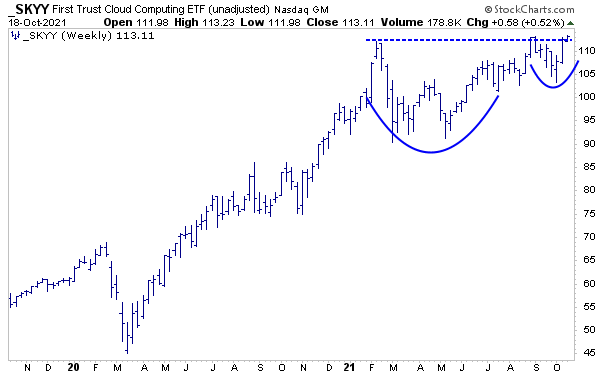 Today’s Chart of the Day was shared in a note by Frank Cappelleri (@FrankCappelleri). It’s a weekly bar chart of the Cloud Computing ETF, $SKYY, over the past year. The largest stocks in this ETF include $DOCN, $ORCL, $MDB, $VMW, and $ANET. In the note, Frank pointed out that $SKYY just broke out to an all-time high, and it’s one of the first Tech-related ETFs to do so since the September-October pullback. As you can see, it has formed a bullish Cup & Handle Pattern over the past nine months. He adds that it may be overextended in the short term given the fact that it’s up six consecutive days now. However, longer-term, this ETF looks poised for a new leg higher.