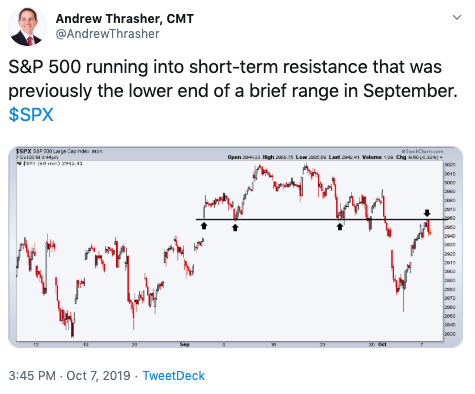 Today’s Chart of the Day was shared on Twitter by Andrew Thrasher (@AndrewThrasher). It’s a one-hour candlestick chart of the S&P 500 index. Andrew points out that price is running into short-term resistance. The chart is a great example of the principle of polarity, where former resistance tends to act as support and vice versa. This level (2940-2960), acted as resistance for nearly the entire month of August. It then acted as support for the majority of September until it fell through at the beginning of October. We’re now testing the level from below. Clearly, this is an important level to keep an eye on in the S&P 500.