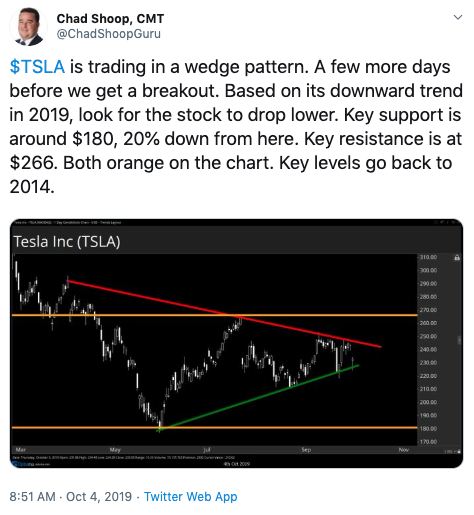 Today’s Chart of the Day was shared on Twitter by Chad Shoop (@ChadShoopGuru). It’s a daily candlestick chart of the highly contested electric automaker, Tesla ($TSLA). Chad points out that the stock has coiled into a narrow range. This pattern of higher lows and lower highs represents a growing frustration between buyers and sellers. Eventually, price works its way to a decision point or apex, and price will break out in one direction or the other. These patterns tend to resolve in the direction of the underlying trend, which in this case is lower. Chad highlights some key support and resistance levels to watch in orange. “Key support is around $180, 20% down from here. Key resistance is at $266. It’ll be interesting to keep an eye on this chart as the breakout could occur as early as next week.