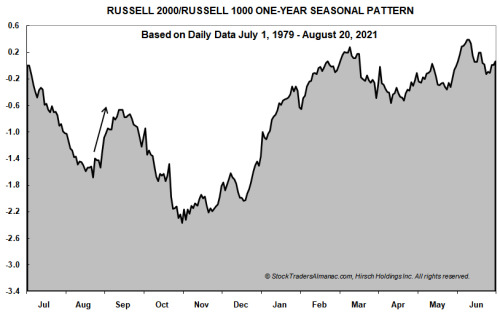 Today’s Chart of the Day was shared in a note by Jeff Hirsch (@AlmanacTrader). It’s a seasonality chart of the Small-Cap Russell 2000 vs. the Large-Cap Russell 1000 (based on data from 1979-2021). When the line is rising, it means Small-Caps are outperforming Large-Caps and vice versa. Jeff points out that Small-Caps have historically outperformed from the end of August until mid-September. Small-Caps have come roaring back to life this week. Last Thursday, the Russell 2000 was on life support, testing the 200-day moving average for the first time in nearly a year. But, buyers stepped in exactly where they needed to, and the index has closed higher every day since. Despite this week’s reversal Small-Caps are still in need of further repair given the fact that the Russell 2000 hasn’t made a new high since March. Could this seasonal tailwind be the juice that nourishes Small-Caps back to health over the next few weeks? For more on this, read the full note here.