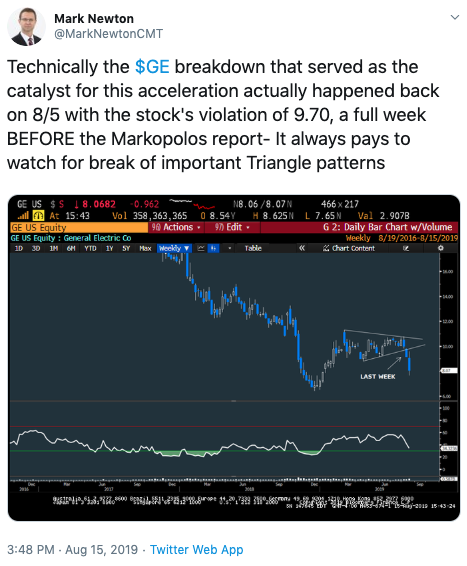 Today’s Chart of the Day was shared on Twitter by Mark Newton (@MarkNewtonCMT). It is a weekly candlestick chart of General Electric ($GE). The stock suffered its worst day in over a decade today, falling 11.30% after Madoff whistleblower Harry Markopolos accused the company of accounting fraud. Mark points out that price began to break down from a triangle pattern a full week before the Markopolos report surfaced. This reiterates our belief that news flow follows price and that all relevant information is baked into price. News like this should come as no surprise to chart watchers who have seen this stock in a multi-year downtrend. Technicians tend to ignore the news and instead focus on price action. This may be hard for some to understand, but the idea behind it is simple. An uptrend is an indication that the company is doing something right, while a downtrend tells you that there could be something wrong with the company. Remember, the trend is your friend!