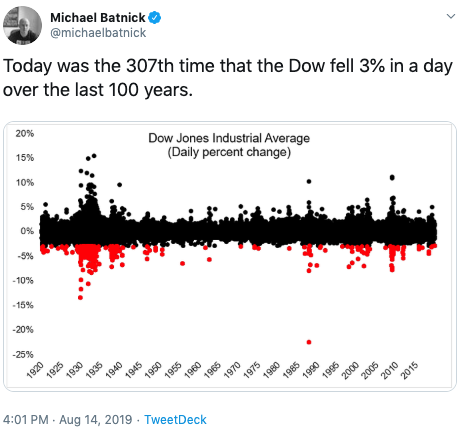 Today’s Chart of the Day was shared on Twitter by Michael Batnick (@michaelbatnick). It’s a dot plot showing the daily percentage change of the Dow Jones Industrial Average over the past 100 years. Today was without a doubt an ugly day for stocks with the Dow dropping 3.05%. There were a lot of headlines pointing out that today was the 4th largest point drop in the history of the Dow. However, when you normalize the data in percentage terms, today’s decline doesn’t seem nearly as historic. Michael points out that today marked the 307th time that the Dow fell 3% in the past century. It’s silly to quote moves in terms of point drops. In fact, the other 3 largest point drops all occurred last year. The fact that this was one of the largest point drops doesn’t mean a whole lot. If anything, it mostly speaks to the fact that the Dow is higher now than it has been in past years. You need to normalize the data in percentage terms before you can make any historical comparison.