The prevailing narrative is that growth has slowed in China amid the escalation in tariffs while the US economy and stock market have been relatively unscathed by the trade dispute. The simplest way to measure the winner and loser of the current trade war is by comparing the performance of each nation’s stock market. Interestingly, the results are mixed among China’s two Equity Markets- its mainland “A-Shares” which are outperforming and the Hong-Kong-based “H-Shares” which have lagged US Equities significantly of late. Here is a performance chart of the two markets compared with the US over the trailing year. 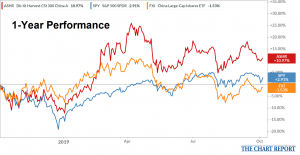 The first tariffs were imposed just over a year ago now and since that time China’s A-Shares and H-Shares have experienced a noticeable divergence in performance. The mainland A-Share market, measured by the Harvest ETF, $ASHR is up roughly 11% and steadily outperforming the US, which is up just a measley 3% measured by the S&P 500 ETF, $SPY. Surprisingly, the H-Share market which typically tracks closely with its Shanghai-listed peers, is down -1.5% over the trailing 12-months, gauged by the iShares China Large-Cap ETF, $FXI.

The outlook isn’t much different on a year-to-date basis as ASHR is up 24% vs just 4% for FXI, compared with a roughly 20% return for SPY.

So whether or not China or the US is coming out on top of the trade war thus far really comes down to where you look. Based on the performance of the Hong-Kong listed shares the US is winning; while China is the winner if judged by the performance of its mainland market. Maybe the more important takeaway here is that if you are looking for exposure to Chinese Equities, you are best served doing it through an A-Share vehicle like ASHR or the KraneShares MSCI China ETF, $KBA. Here is a long-term look at ASHR.

ASHR found support and bottomed this past December at the same level it did back in 2014 and 2016, around $21. Prices rallied to almost $30 by April, representing a nearly 50% move in less than 4 months. We’ve since chopped sideways as prices digest these gains in a range between $25.50 and $29.50.  While the A-Share market appears trendless for the time being, we want to pay attention as a move above or below this rectangle formation could mark the beginning of a new secular trend after a few quarters of consolidation.

Hope you enjoyed this post! As always, reach out to me at Strazza@thechartreport.com with any questions or comments.