China’s economy has been under the microscope for a while at this point, as it becomes more and more of a global player among trade and capital flow. While still not considered a “developed” economy, due to GDP per capita levels, it is still a very important region to watch. Of course, we are entering the second year of the tariff standoff, but there are arguably more important things to focus on, one being Chinese equities. After all, we don’t invest in headlines, but we do invest in stocks. This upswing may also give us clues as to what is in store for other areas, specifically Copper.

One index that many participants have been keeping an eye on is the Shanghai Composite ($SSEC), which broke out to new highs yesterday after consolidating for five weeks:

In fact, John has been pounding the table on China for awhile. He appeared on Real Vision late last week and provided a very interesting chart. Going back to 1990, John says there have been five rallies that saw gains of 120% to over 500%. The average advance has lasted about 16 months. He believes we are now entering the sixth cycle. John also points out that he doesn’t think it would be too outlandish to see the Shanghai Composite reach anywhere from 3600 to 5000. Currently, we are sitting around the 3150 level, after seeing the index reach a low of 2440 late last year. 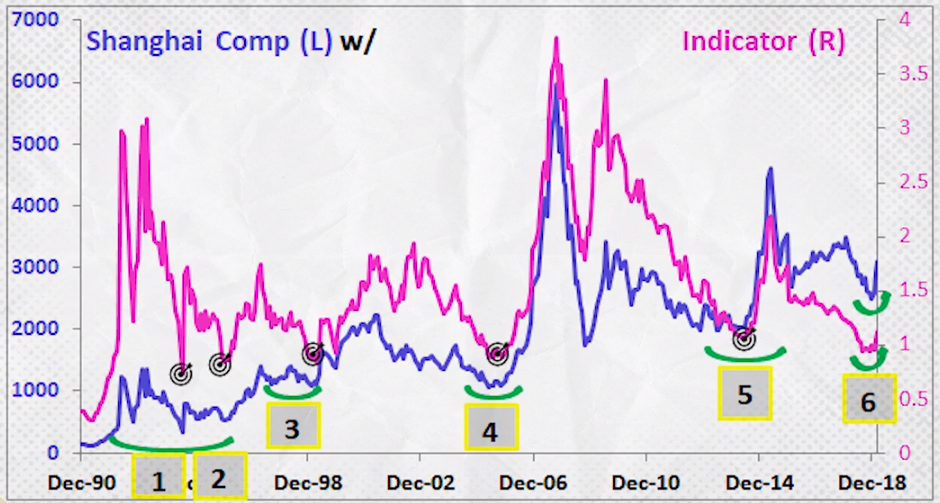 Some will argue the strength in Chinese equities is because of the positive economic data coming out of the region. On Monday, China’s Manufacturing PMI jumped back above 50, after months of contraction. This chart from Callum Thomas, Head of Research at TopDown Charts, highlights the strong correlation between China’s PMI and Copper prices:

Rebound in the #China PMIs maps to the price action in Copper pic.twitter.com/g06riNf4fS

There also appears to be a strong short-term correlation between the Shanghai Composite and Copper, as both are emerging from 9-month bases:

The Shanghai Composite is also coming off it’s best quarter since 2014, following two straight years of relative weakness compared to Hang Seng-listed firms. While many believe these two indices are interchangeable, this is not the case. There are actually some very distinct differences, one being that a large portion of the companies listed on the Shanghai Composite are the giant, state-owned enterprises (SOE) responsible for a sizable portion of China’s economic growth. Some say this gives a better feel for the overall health of the Chinese economy.

China’s equities have also out-paced every other national stock market in the world over the last three months. In fact, apart from a Taiwanese chipmaker, a Brazilian steel producer and Latin America’s largest utility, all the top 30 performers on MSCI Inc.’s emerging-market benchmark are Chinese companies. Overall, there seem to be some very positive developments going on in this region, and if you’re a believer in John Roque’s thesis above, there may be a lot more fuel left in the tank.