Whether you saw the late December to February rally in the stock market coming or not, bulls can feel confident with risk-on sectors leading the market higher. One of these important sectors is Small-Caps. Since the December 24th low, Small-Caps (IWM) are up 19%. Mid-Caps (MDY) are up 18.5% and Large-Caps (SPY) are up 15.2%.

Looking at the Russell 2000 relative to the S&P500, the daily chart has approached key resistance, which was prior support. If Small-Caps can break above this level, it would set the stage for continued outperformance, a further rally and the possibly for small caps to head back to all-time-highs relative to the S&P 500. 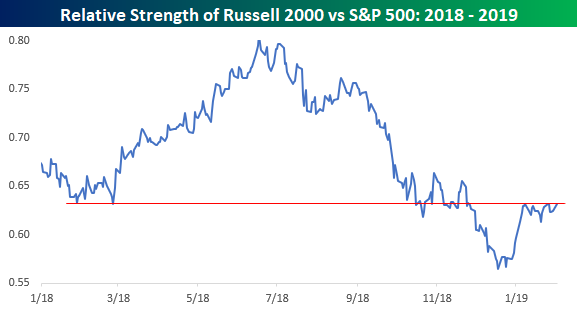 Zooming out, investors can see that Small-Caps relative to Large-Caps have been in a range or consolidation for a long time. In the chart below, a rising line indicates Small-Cap outperformance relative to large-cap, while a falling line indicates that Large-Caps are outperforming. Bespoke notes “while small caps saw steady outperformance from the start of 2000 right up until early 2006, since then it has been a series of shorter-term ebbs and flows where phases of outperformance by either large or small caps are measured in months rather than years and neither one takes a big lead over the other.”  To show how indifferent this outperformance has been, since late January 2006 the Russell 2000 is up 114% while the S&P 500 is up 115%.

Within the Small-Cap space, we want to focus on one sector: Technology. Small-Cap Tech has been in a clear uptrend relative to the Russell 2000 since 2013. Since mid-2017, price has been consolidating and building out a base near all-time-highs. This ratio looks like it has the potential to break out in the near-future and investor will want to be positioned in Small-Cap Tech.

Taking a step further, it’s important for investors to do a deep-dive into any ETF they are thinking about owning. Its also a great way to find individual stock ideas within that sector or market-cap that fits their investment thesis. Let’s take a look at a few of our favorite stocks from the top IWM holdings. These include: FIVE, COUP, TTD and ARRY.