Copper futures are at a pretty interesting spot right now. Several bearish patterns have formed on the weekly chart and sentiment is extremely negative. Yet, price hasn’t broken down and it continues to trade above support.

Copper is an important industrial metal used in construction, machinery, electrical equipment and more. Because of its numerous industrial applications, it can serve as a good barometer for global growth and risk appetite. In periods where industrial growth is booming, Copper is in high demand, and the price is likely to rise. On the other hand, when industrial growth is weakening, there is less demand for Copper, and the price is likely to fall. It’s often said that the metal has a Ph.D. in Economics and it’s referred to by traders as Doctor Copper for its ability to forecast global growth and economic recessions.

It seems that everyone is anticipating a recision right now with things like the inverted yield curve and political turmoil dominating the headlines. However, JC Parets explains that Copper isn’t showing any signs of economic distress and is actually holding up quite nicely. He explains that Copper is actually supportive of Emerging Markets strength as long as the metal stays above the $2.50-2.55 level. This is because Copper and Emerging Markets have historically had a positive correlation.

copper continues to not care about your recession fears, or impeachments or whatever you're making up today. Copper holding this support like it did this week is very impressive imo. I still think it says a lot about upcoming EM strength if Copper is above 2.50-2.55 $HG_F $EEM 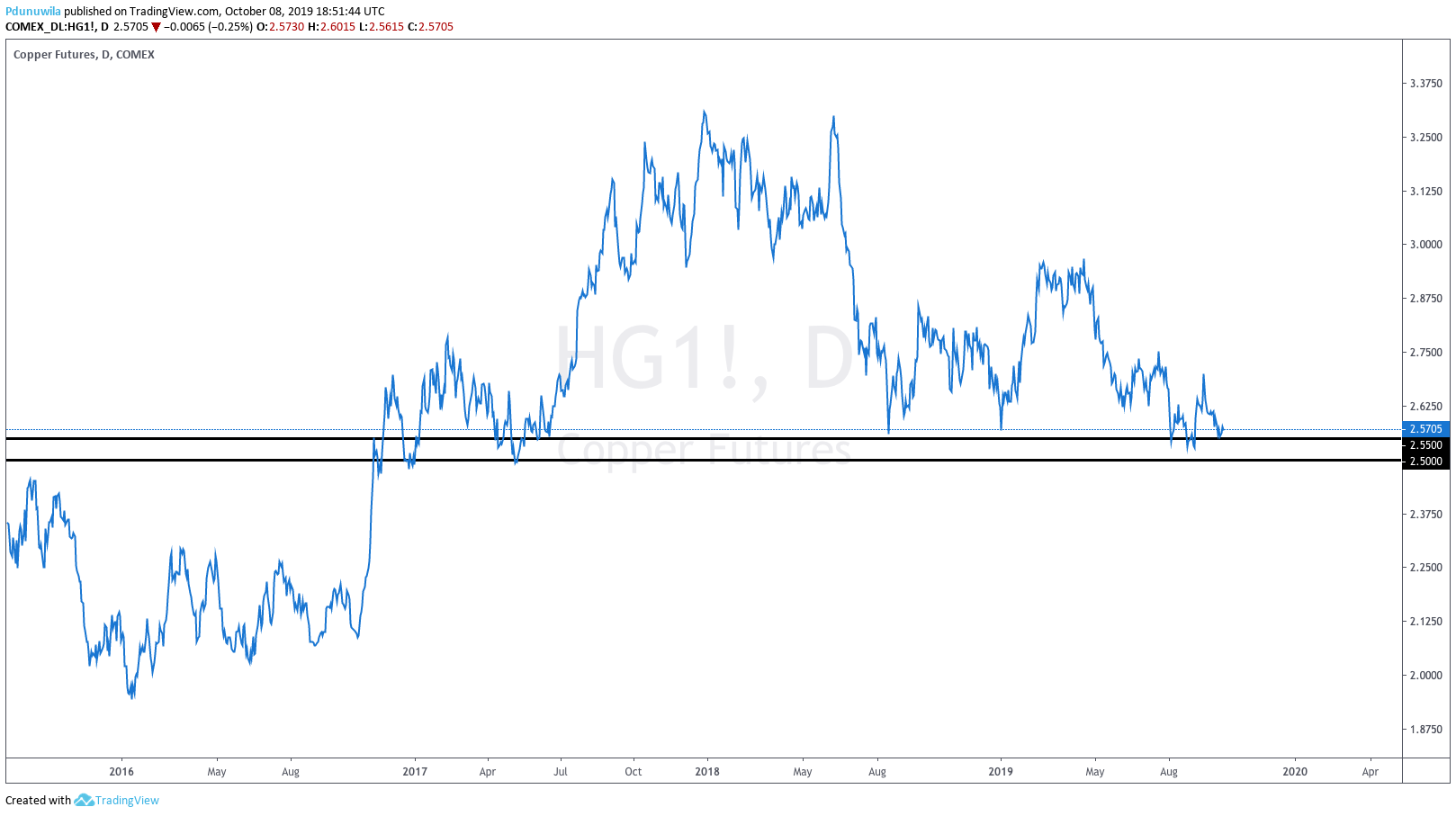 If you’re familiar with classic chart patterns, then you probably noticed the obvious head & shoulders top that’s formed on this chart. We highlighted this pattern in a “Chart of the Day” back in August, however, the price hasn’t broken down at all since then.

It’s important to pay attention when obvious patterns like this fail. Traders who got bearish or short based on this pattern have been wrong for months. When price doesn’t move in the direction they were expecting it can cause them to collectively buy to cover, sparking a rally. When we talk about failed breakouts we often use the phrase: “Out of failed moves come fast moves in the opposite direction.” The same idea applies to failed chart patterns.

In the tweet below, @CEOTechnician points out that “Large Speculators” (hedge funds) have a record net short position as shown by the Commitment of Traders data in the bottom panel of the chart. He adds: “Meanwhile, the copper price has begun to put in some higher lows.”

@MacroCharts also pointed out the record net short position in Copper. An unwind of that massive short position could lead to a significant rally from here.

Well-developed multi-month Base near rising 200wma and prior big lows.

Not shown, positioning still near record Short for the entire data history since 1993.$HG_F #Copper pic.twitter.com/tAtrt9g3jI

Strength from Copper would be positive for both the global economy as well as Emerging Markets. We’ll continue to keep an eye on this and report back with any major developments. As always, feel free to contact us with any questions.