With the uncertainty around equity markets due to the recent correction, there seems to be a new round of piqued interest in the fixed income space, and thus interest rates as well. Are US Treasuries, typically viewed as a “safe haven” for investors in times of uncertainty, poised to see more gains? Should we be looking to put money to work in short- or long-dated areas? What does this mean for various equity sectors? We will take a look at all these questions and what the current landscape is telling us.

John Kolovos. Head of Technical Strategy at Macro Risk Advisors, appeared on Bloomberg earlier today. He pointed out the Death Cross that appeared on 10-year yield back in January and believes that there could be sustained downside. Thus, he says, bonds should continue in their respective longer-term uptrends:

10-yr yld is back below 2,3% & at 2017 levels, here's a look at what its January Death Cross may mean & John Kolovos bullish on #bond futures pic.twitter.com/FXUa3P7n3w

Tarek Saab of Fibonacci.com points to the potential breakout in a popular risk-on/risk-off relationship, noting that 20+ Year Treasuries are moving higher against High Yield Corporate bonds:

I'm watching the $TLT / $HYG ratio very closely. This week it broke out of a 5-year triangle above falling resistance. Very interesting. pic.twitter.com/UF3EZtldpF

Fellow TCR contributor Steve Strazza has given us a wonderful view of Treasuries across a couple of different maturity time frames, including 3-7 years ($IEI) and 20+ years ($TLT), both of which are moving above their highs from late March. He also mentions that the broad bond market ($BND), tied to the Barclays US Aggregate Index, is moving to new highs:

Plenty of bond ETFs breaking to new highs today with the 5, 10 & 30-yr Treasury Yields all at fresh 52-week lows.. High Yield $HYG is not one of them.. $IEI $IEF $BND pic.twitter.com/5puElPHhyh

TLT One instrument of choice to profit from in a stock market sell-off is to buy the iShares 20+ Year Treasury Bond ETF (TLT), which is a pure play on lower long-term Treasury yields as the flight to safety puts tremendous downside pressure on long-term interest rates pic.twitter.com/IYlA3f76u0

As foreign investors (outside of China) pile into US Treasuries at the highest pace over the last year, this could also keep interest rates subdued for a period of time:

Save for China, net purchases of U.S. Treasuries by foreign countries up sharply since last fall@acemaxx @PictetWM @SoberLook @FactSet pic.twitter.com/3tUBtEIxND

What about other areas on the fixed income spectrum? Rates on Municipal High Yield bonds are also making new lows:

We focus a lot on the dangers created by the global hunt for yield. This one is notable: yield on Municipal High Yield bonds now at 20+ year lows (4.5%). TM #DriehausAlts pic.twitter.com/YNw3Ni7zO3

Callum Thomas of Topdown Charts brings to our attention that bond volatility could also be on the verge of making a big move, noting that “Bond market volatility is starting to pickup, and this comes after the MOVE bond volatility index made an all time record low in March this year.  It’s a bit of a cliché, but a fair rule of thumb is that low volatility is a good predictor of future higher volatility.  With bond yields on the precipice this is something to keep in mind!” 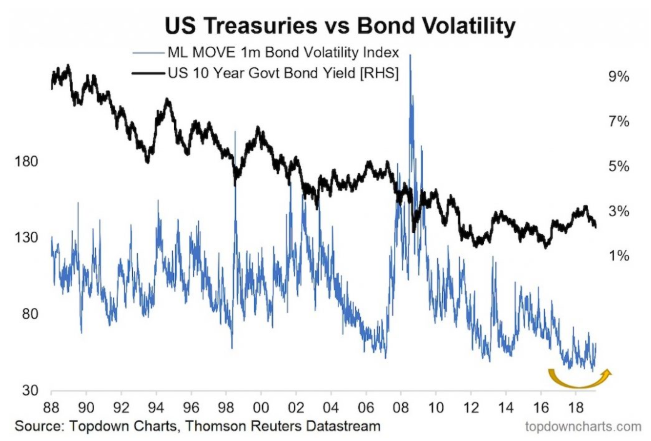 So, what does this mean for equity markets? Considering that many portfolio managers have maximum cash limits, this means that they have to stay long and many will look to put assets to work in Sectors/industries that see the largest benefits from lower interest rates. These include Utilities and Real Estate, which have been the top two performing Sectors in the S&P 500 over the last few weeks:

Mary Ellen McGonagle also mentions these two Sectors when looking for a safe place to put money to work, noting that “Income investors, as well as those looking to buffer their portfolios from any sharp gyrations in the U.S. Equity markets, may want to consider these four technically sound stocks, which can act as a buffer against continued volatility while providing growth prospects that should keep them attractive in the long run.“

What about Preferreds, which have characteristics of both fixed income and equities? Just like bonds, which also make fixed payments, the market value of preferred shares is sensitive to changes in interest rates. If interest rates rise, the value of the preferred shares falls. The main reason to treat preferred stock as debt rather than equity is that it acts more like a bond than a stock, and investors buy it for current income, not capital appreciation. Like common stock, preferred stock represents an equity stake in a company, but its many features make it more like a debt security. So far in 2019, ETFs tied to Preferreds have seen some of the best returns: 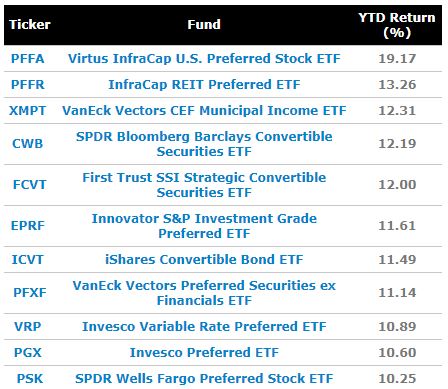 From a contrarian perspective, and something to keep in mind as the talk about lower rates picks up, Tiho Brkan notes that according to the latest COT report, bullish sentiment among short-term Treasury bonds may be overdone:

Positioning in the Treasury bond market by small speculators has been bullish in recent months, but the price of bonds continues to rise (yields down).

Now it’s becoming overly bullish. At which point could such positioning mark a reversal in trend?

With a breakdown in yields across various maturities in Treasuries, as well as the drop in rates we have seen in the Municipal bond space, most investors believe rates will continue to move lower. This sentiment also seems solid based on the increased buying of more rate-sensitive equity Sectors, such as Utilities and Real Estate. Volatility in bonds could also be ready for a spike. Given all of this information, it would seem that the weight of the evidence points to lower yields and higher bond prices for the foreseeable future. However, be careful of the latest pick-up in long positioning, as this has tended to lead to short-term peaks in the past.

Have any questions, comments or concerns? Feel free to reach out to us!