The U.S. stock market and bitcoin both had a great year in 2017 with both ending the year right around fresh all time highs. This had many market participants thinking that the two asset classes were somehow correlated to each other. Then, in the beginning of 2018 stocks and bitcoin started of the year by selling off in tandem, again reinforcing this belief that the two had some sort of common relationship or correlation. We saw all sorts of pundits and noisemakers all over the financial media reaching for reasons to describe why the two happened to be heading in the same direction together.

Charlie Bilello, director of research at Pension Partners, gave a fantastic interview to CNBC yesterday where he did a deep dive into the relationship between the two asset classes and explains that there is seemingly no correlation between the two. He uses some good charts and data to disprove the commonly believed myth that the two are related. 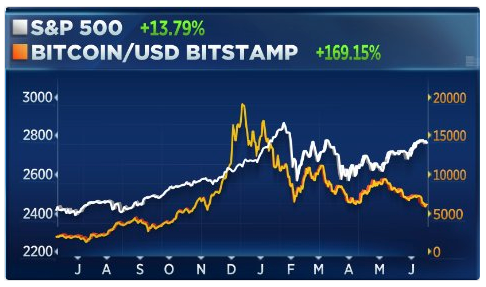 ere is the chart from the interview comparing the S&P 500 to Bitcoin priced in US dollars. If you look at 2017 the two assets moved up considerably together. Bitcoin was up 1000% and it was a great year for equity markets. Then, in early 2018 The S&P 500 sold off 12% from its high while bitcoin dropped 33% during the same period. They seemed to be moving together. Many began speculating that there was some sort of common force causing the two to move in the same direction at the same time. People offered all sorts of reasons to explain this phenomenon including fed policy, politics, animal spirits, etc.

Bilello astutely points out in the interview that you have to separate correlation from causation. And that there is seemingly no fundamental reason that the two should be moving together. He goes on to explain that recently, the relationship has completely broken down. Bitcoin is down over 60% since its peak while during that same time the S&P is actually up 4%. He the argued his point further by explaining that  if you go back and look at the data over the long-term, you’ll find that the correlation between bitcoin and stocks is nearly 0. In other words, over the long term the movement between the two asset classes is completely unrelated. He adds that just because two assets are uncorrelated doesn’t mean they can’t at times, move together and emphasizes the point that traders and investors should be careful not to confuse correlation with causation.

The debunking of this myth should come as a relief to most investors. Bitcoin continues to slice through support levels like a hot knife through butter while U.S. are sitting right near all time highs again.