Boeing ($BA) has been the best-performing Dow component this year. Not only is Boeing the largest percent gainer, up 25% YTD, but it has also contributed the most gains to the Dow YTD as well as over the past year, due to its 11% weighting. In their morning note today, Bespoke pointed out Boeing’s superior status in the Dow and what it means:

“As great as things were for the DJIA when Boeing (BA), with its high price and weighting in the index, was on the way up, today the DJIA is feeling the pain of what happens when a high priced (weighted) stock in the index declines.  With shares of Boeing set to open down over 10% this morning, its decline is set to have a negative impact of around 250 points (or 1%) at the open.”

One could argue that Boeing is one of the most important stocks in the market due to its massive impact on the price weighted Dow Industrials Index. At about twice the weighting of any other holding, the scatterplot below highlights its size and influence relative to the other components. 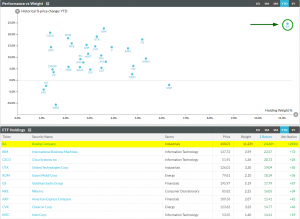 The stock’s epic rise came to a sudden halt today as price fell -12% on news that many airlines are grounding the company’s new 737 MAX 8 passenger jet after its second deadly crash in just five months.

One Day Doesn’t Make a Trend

Of course, the emotional fintwit crowd reacted with a slew of pessimism, including one tweet I found particularly fun, with some cool shapes and a suggestion that price could fall $300 in a matter of months. 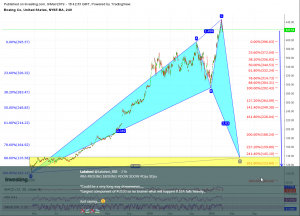 Even the Fibonacci Queen, Carolyn Boroden weighed in, calling the chart a “bust” among other things…

The point is, it’s hard to find positivity around a stock in the wake of bad news, especially in the short term. This is why it’s important to zoom out in situations like these and put things in context of the bigger picture. Or in Boeing’s case, in the context of a long-term structural uptrend.

When in Doubt, Zoom Out

If you have a long-term investment horizon, this price move was a gift… and many market participants treated it that way as Boeing rallied 7% intraday to close near its highs (still down over 5%). The current price had been extended after rallying 50% peak-to-trough since December’s low, and began selling off prior to today as price printed a bearish reversal last week. As you can see in the weekly chart, we got just pennies away from a bearish engulfing candle. While I’m not suggesting that last week’s action was pricing in a plane crash – I am saying that price tends to lead the news, no matter what it is… and regardless of a change in fundamentals, Boeing was due for a pullback.

Today’s retest of its breakout level around $370 represents healthy price action and will allow technicians to gauge the intensity of supply and demand at this important level of interest. It is probably not a coincidence that today’s opening price was within a few dollars of where price peaked 5 times last year (noted with arrows on the daily chart, below). Nor is it odd that this same level corresponds with the 424% Fibonacci extension from the stock’s financial crisis drawdown. But you don’t have to be a Fibonacci believer to agree the $370 area represents key former resistance which turned into support when price gapped above it to new all-time highs last month.

Buyers maintained their dominance today as price reversed beautifully off this level, closing at $400, just above its 2018 high and fresh record high from last month.

Knowing Where You Are Wrong

If we’re above this $370 level, I’d be buying Boeing and utilizing news events like todays to take advantage of short-term price dislocations in order to get the most optimal entry possible. At the end of the day, the closer an entry is to the level where you know your trade is wrong, the better the reward-to-risk profile will be. And in the case of Boeing, today was a perfect day to be greedy while others were fearful as you could have picked up the stock at just above a well-defined level of long-term support.