Tanks rolled through Washington, DC last week as part of a revamped Fourth of July celebration that this year turned into a full-on military display. The United States has long been known for its global military prowess. During a week where many proud Americans reflect on this great nation, investors seemed to be doing the same as the US Aerospace & Defense Industry hit new all-time highs. Both the cap-weighted Invesco Aerospace & Defense ETF ($PPA) and the equal-weight SPDR S&P Aerospace & Defense ETF ($XAR) hit new all-time highs during the week before closing Friday at record closing highs.

While a handful of ETFs on our Industry watchlist registered new highs this week, Aerospace and Defense has been one of the stronger areas of the market and particularly within Industrials ($XLI), over the trailing year. As you can see in this performance chart of various Industrial subsector ETFs, PPA has been outpacing its peers for some time, and its outperformance has been accelerating noticeably since late April. It has almost doubled the performance of the Industrial sector in the past year and is up ~12% over the trailing 3-months vs a measly 1.4% return for XLI. 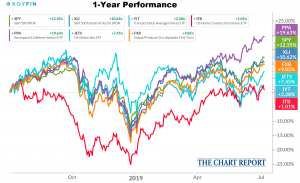 This outperformance is also illustrated by the ratio chart of Aerospace & Defense vs the S&P 500 ($SPY) which shows PPA consolidating at new record highs relative to the broader market (lower pane). PPA has been trading sideways relative to the S&P since Q1 2018 in an inverse head & shoulders-like pattern. In June, prices resolved higher to new record highs and have successfully retested the breakout level twice since. As always, we want to be putting capital to work in the strongest industries in the strongest areas of the market. The price relative and performance charts are all the evidence we need to know that Aerospace & Defense is one of them right now.

Looking at the absolute price chart in the top pane, notice that PPA had consolidated just beneath the 62 level (which represents the 423.6% Fibonacci extension of the financial crisis drawdown) for almost a year before recently breaking higher. You can see similar action in many of the major indices today as the Dow Jones Industrial Average is currently consolidating beneath its own 423.6% extension based on its key 2007 high*. This Fibonacci level makes 62 a natural place for price to digest gains before another leg up, which is exactly what we’ve seen as it was tested a handful of times in 2018 and this year before breaking to new record highs in June.

Momentum has been in a very bullish regime since February as the daily RSI-14 has not fallen below 40 on pullbacks and has hit overbought readings on four separate occasions over this timeframe (RSI not shown). In light of this bullish momentum, relative strength and a formerly flat 200-day that is now curling upwards, I think this new uptrend sticks. Now that bias is to the upside, we want to use the 62 area to define our risk and buy weakness towards it. Happy Fourth of July and happy trading!

As always, please reach out to me at strazza@thechartreport.com if you have any questions or comments on this post.

*In this recent video by J.C. Parets of All Star Charts, he explains how to use Fibonacci extension levels with a current chart of the Dow as an example.