Crude Oil fell nearly 7% last week, marking the worst weekly performance for the commodity so far in 2019. It was up an astounding 57% from the December 2018 lows in less than six months before topping out at the end of April around $66 per barrel. It’s now trading around $58, about 14% off the April highs and it’s sitting right at the 200-day moving average. This has many wondering if the recent weakness is simply a pullback or the end of the 2019 bull run for Crude Oil. 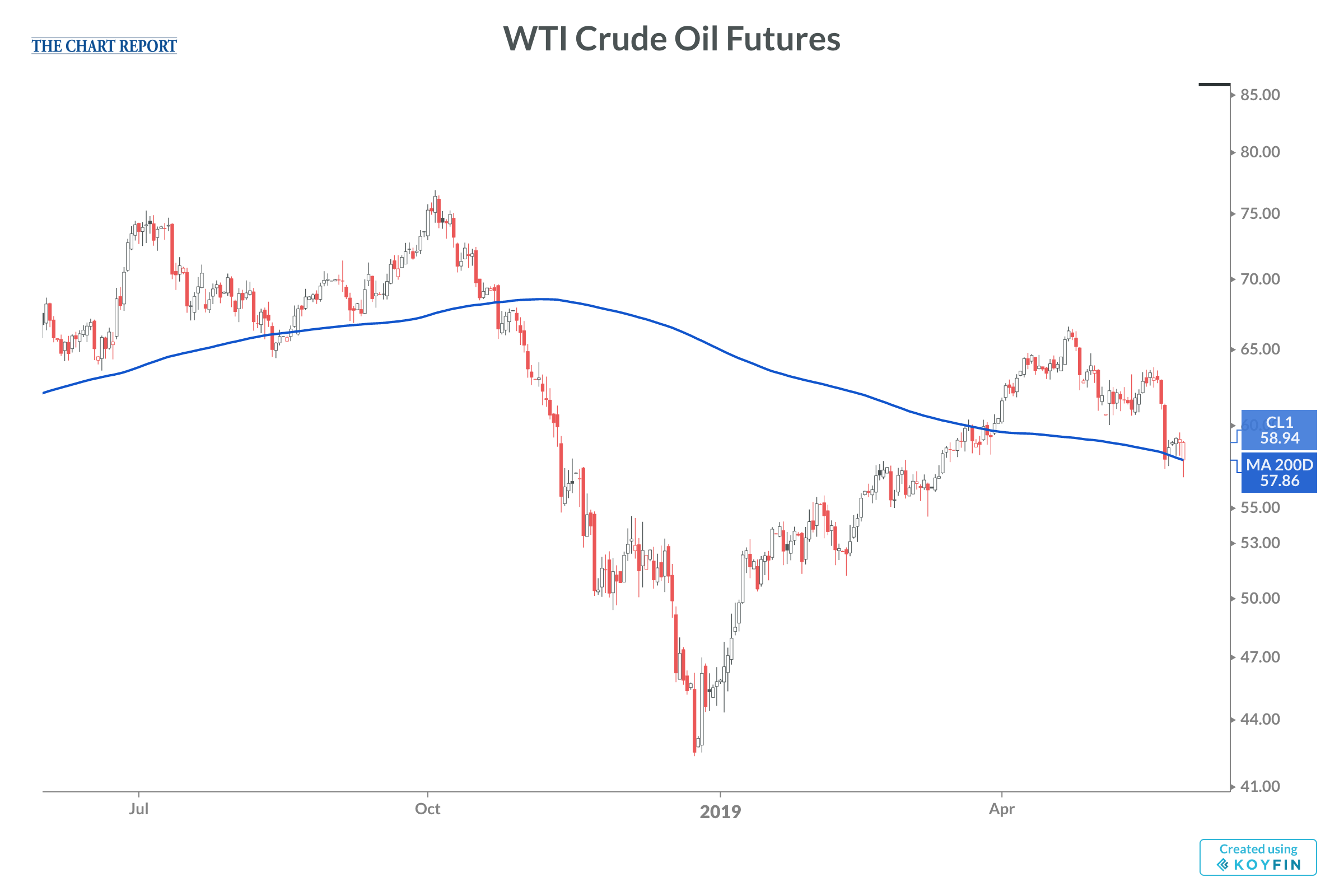 Legendary technician, Louise Yamada made an appearance on CNBC’s Futures Now segment yesterday to lay out the bear case for Crude. In a previous interview, she had stated that Crude Oil would need to hold above the $60 level in order for the rally to remain intact. Clearly, $60 did not hold and in her most recent interview she said: “obviously the upside is limited.” and “the path of least resistance may be to lower levels” She gives $52 as a downside target but says we could be in for a sideways trading range between $52 and $62. Yamada also notes the weakness in the energy sector as a whole by saying:

“The relative strength on the sector has been very poor. It broke down in 2014 structurally, and nothing has changed to improve our view of the sector, the stocks or the commodity.”

In yesterday’s Chart of the Day, we featured a chart of Crude Oil from another respected technician, Chris Kimble. In the chart pictured below, he points out that price reversed right at the 61.8% Fibonacci retracement level and is now slicing through support. He brings up the fact that Crude Oil has been highly correlated to the S&P 500 and suggests that further weakness could put pressure on US stocks. 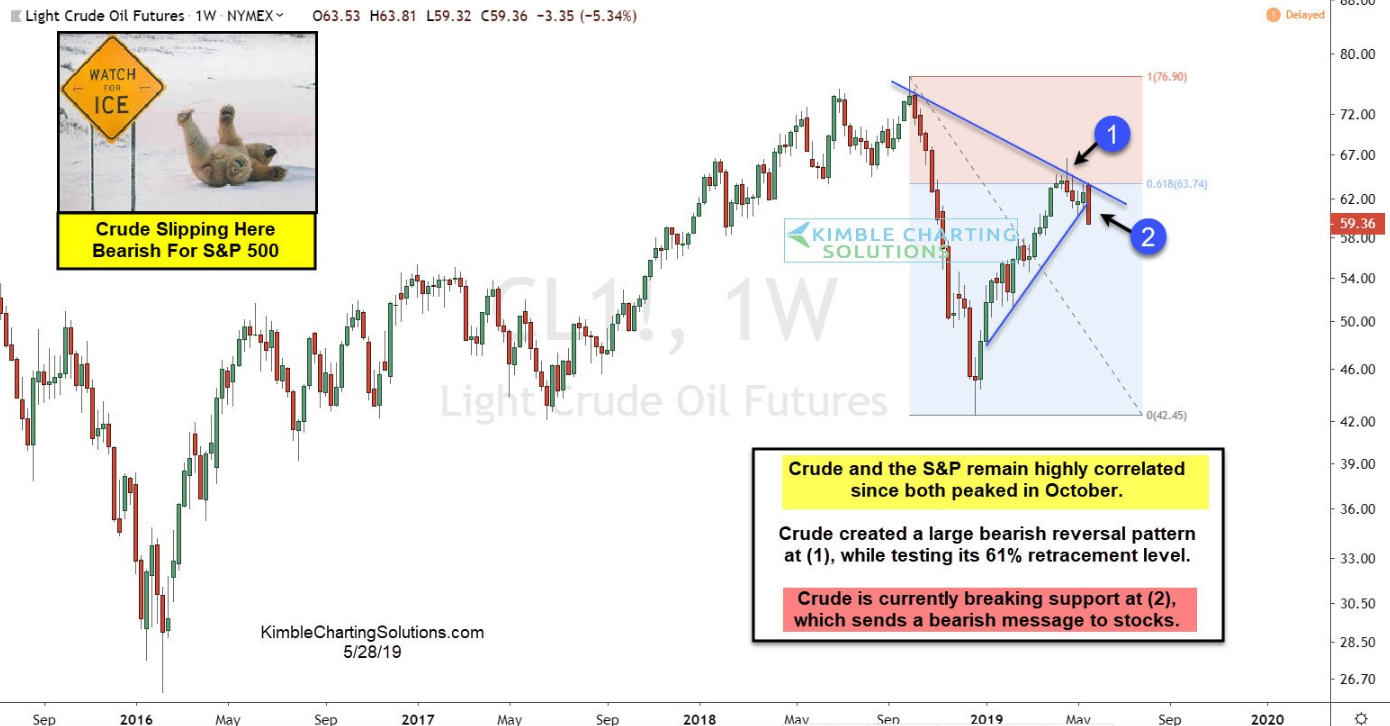 The team at All Star Charts Institutional has also been calling attention to the high correlation between Crude Oil and stocks lately, as well as the current trading range Crude is stuck in. 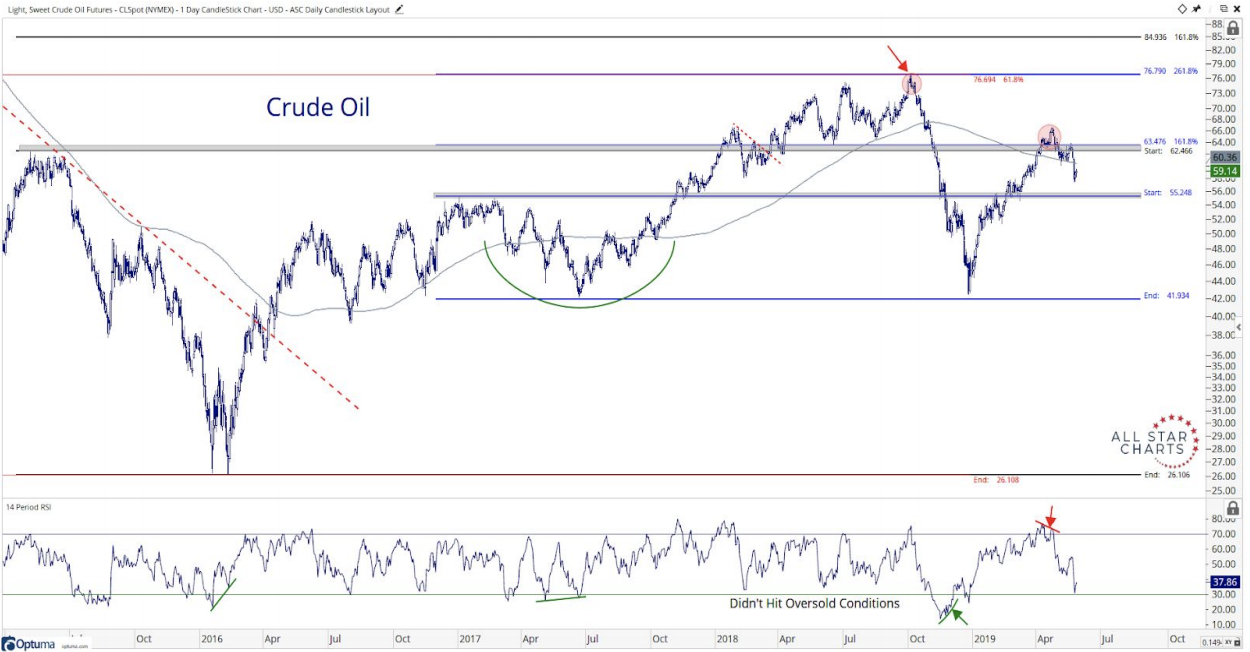 The above chart was included in their weekly “Top Ten Charts” report that was published today. In the note, they write:

“After a failed breakout above $64, sellers remain in control of Crude Oil in the near-term, targeting $55 on the downside. Given the strong correlation with stocks, this should put additional pressure on Equities, specifically those in the Energy and Materials sectors, though we think the reward/risk on the short side is no longer attractive in either Crude Oil futures or its related sectors. With that said, the range remains $55-$63.50 and its resolution to the upside or downside will have significant implications for Equities as an asset class, so we are watching closely.”

It’s important to note that correlations will vary in strength over time and rarely last forever. However, as long as Crude Oil and the S&P 500 remain highly correlated, it would be wise to keep an eye on Crude for confirmation of the direction of the US Equity market. We’ll be sure to report back with any major developments. As always, feel free to contact us with any questions.